From The Vault: Legend of the stripper and the sheriff 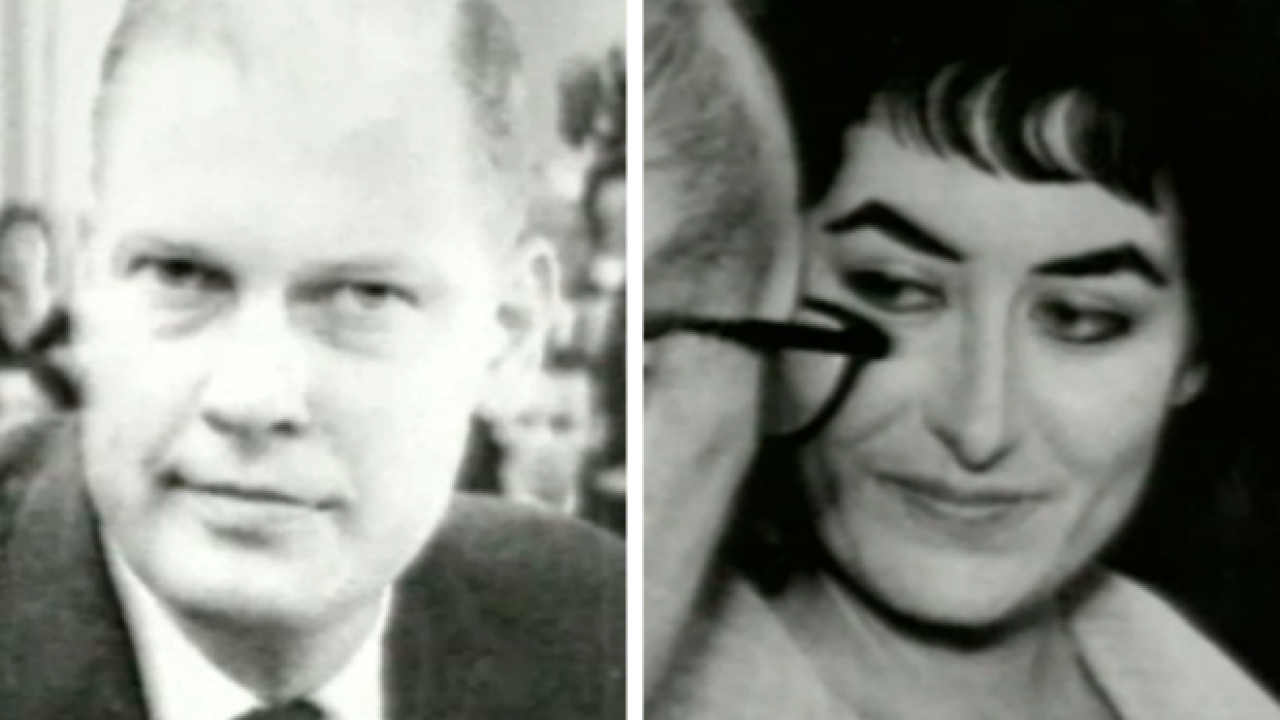 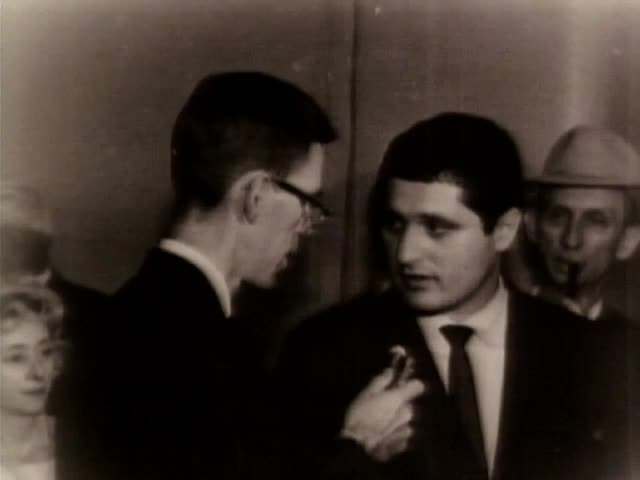 NEWPORT, Ky.  – Take a stripper and a squeaky-clean married football star running for sheriff,  put a knock-out drug in his drink, take off his clothes and throw them in bed, add a phony police raid and you have the makings of the most sensational episode in the colorful history of the original "Sin City USA."

After a week of sordid accusations in court and vivid testimony from two strippers, a surprise witness made it clear that George Ratterman had been set up, that the former Notre Dame and Cleveland Browns quarterback had been drugged, forcibly stripped and laid in bed with April Flowers, just in time for three policemen to rush in and arrest him.

It was clear that the Mob and a few police and judges on the take in 1961 wanted to derail Ratterman's candidacy -  the 34-year-old Fort Thomas stock broker and father of eight had just entered the race for Campbell County sheriff. He vowed to run the gambling houses, prostitution, corruption and other vice out of town.

Once the judge in Ratterman's case dropped the breach of peace charge, the Mob and the others were doomed.  In short order, Ratterman was elected and four high-ranking local police officials were ousted. A grand jury returned 140 indictments.  A federal grand jury, aided by FBI agents sent in by Attorney General Robert F. Kennedy, scared off the Mob for good.

By the end of Ratterman's term, only the strip clubs were left. It was hard for even Ratterman to believe.

“In four years I got rid of the gambling and the prostitution, and I didn’t get killed,” the Cincinnati native told Sports Illustrated in 2004.

On the contrary, the failed attempt to smear Ratterman empowered and emboldened the grass-roots campaign to elect him and clean up the county.

And it was the trial – the Trial of the Century in the Tri-State - that got the ball rolling.

Imagine how the story of Ratterman's  May 9, 1961 arrest would whip up a frenzy online and on TV today. For three weeks, it was the talk of the town. Hundreds crowded the courtroom every day, and the overflow packed the hallway.  WCPO provided the area's first live remote broadcast of the trial, along with exclusive interviews from Flowers and other characters.

In an on-air interview with WCPO anchor Al Schottelkotte the day after his arrest, Ratterman partially blamed his own "stupidity' for getting caught in a "tremendous frame-up." As evidence, his doctor announced that a blood test had found a "triple dose of choral hydrate" in his system.  On the set, Ratterman held up the pants he wore the night before and said the zipper had been torn out, offering that as proof that he had been undressed against his will.

"When I take off my own pants, I normally don't tear the zipper off," Ratterman said. "The attorney who picked me up at the jail mentioned that I should zip up my pants and I told him I couldn't because the zipper had been torn off."

For the first time, Ratterman offered his version of events that night.

He said a mutual friend of him and Tito Carinci, the manager of the Tropicana, a gambling joint and honky-tonk in Newport, had been trying to get him to meet with Carinci, a former Xavier football star. He said Carinci wanted to get out of the gambling racket.

"I guess I am a bit naïve, Al. I've known Tito personally for a number of years through our mutual background in sports," Ratterman said.

Ratterman said he refused for several weeks but finally agreed to meet Carinci in a downtown bar, He said he  had one drink while they talked for several hours. Against his better judgment, he said, he went to Corinci's suite in the Glenn Hotel above the Tropicana. It was about 2 a.m.

"We were in Tito's suite. I remember suddenly becoming very groggy," Ratterman told Schottelkotte. " I walked over to one of the beds in his bedroom and laid down … I remember I was about powerless. I just had to lay down. And I guess that's when the knockout drug took its effect.

"The next thing I remember is a tremendous commotion in the room. Several men were in there yanking on my clothes, tearing my pants and  underwear off. There was a woman in the room, too, and that was the first time I had seen her.

"My recollection of this is admittedly a bit hazy because I was under the influence of this drug, but I can recall being pushed down and getting up again and being pushed down again. I believe I can recall a thought, too, that it would be absurd in my condition – I just felt totally weak and powerless – for me to try to  fight back. For this reason, I do not believe I resisted arrest as they say."

Once the trial began, so did the he-said, she-said.

One of the first witnesses, a Newport detective who was in on the raid, said they responded to a call complaining about prostitution at the Glenn. He said there was strong smell of liquor on Ratterman. But the desk sergeant who booked Ratterman testified that he "couldn't smell a thing."

Carinci testified that Ratterman knew full well what he was doing and got caught in the act. Carinci, who also was arrested in the raid, denied he set up Ratterman.

"The only person around he could put any blame on is me," Carinci said.

During a court break, Carinci talked on camera with WCPO reporter Allan White.

White: "Do you believe Ratterman's story that he was drugged?"

Carinci: "I believe he got caught. He's human like anybody else. He got caught and he's too weak to admit it."

White: "Do you concede he was in a delirious condition?"

Carinci: "No, sir. No more than anyone after they'd had a few drinks."

At the end of his testimony, Carinci said he had visited his priest that morning and swore his story was true. Then he turned to Ratterman and said, "George, can you do that?"

The star witnesses were Flowers and another stripper, Rita Desmond. They sat on either side of Carinci in the courtroom. On the stand, they said they didn't know anything about a frame-up.

Desmond said she had been with Flowers at times during the night. Desmond said Ratterman had "a few drinks" and was in "a good mood."

Flowers said she was with Ratterman for only a few minutes before the raid.  She said he had undressed himself.

Before her own testimony, Flowers talked to WCPO's Jack Fogarty and cried at one point.

Fogarty: "What were your impressions as you listened to the testimony? Were you uneasy?"

Flowers: "Not really. I'm just getting madder listening to all the lies."

Fogarty: "You don't believe any part of the testimony given by Mr. Ratterman?"

Flowers: "Some of it but not all of it."

Fogarty: "Do you think you've been abused?"

Flowers: "By being called a prostitute."

At that she teared up.

Fogarty: "This is a charge never made before?"

Four months later, Flowers would call the WCPO newsroom, recant her testimony  and say Ratterman had been framed. She said it was not true that Ratterman had partially disrobed. She said he was unconscious in the room and that police came in and took him to another room.

It didn't matter in the long run, though, because a photographer's testimony exposed the frame-up.

Thomas Withrow said he had been contacted by the Tropicana's attorney and asked to take a picture of a man and a woman. According to Withrow, the attorney said he would be well compensated. He was supposed to be at the hotel at 2:30 a.m. – the same time police arrested Ratterman.

But Withrow said he backed out. Without a picture of Ratterman and Flowers together in bed, the conspirators staged the phony raid,  Ratterman's attorney said.

Months later, Carinci and five others – including the three policemen - were indicted in the frame-up. Carinci denied it and was acquitted in 1963. Two were convicted of conspiracy –   the Tropicana attorney and the nightclub operator. Both were sentenced to a year in prison.

After Ratterman's charge was dropped, his wife Anne kissed him on the cheek and the jubilant couple talked to WCPO's Allan White outside the courtroom.

White: "You've been drug through a lot of mud. How's your reaction."

Ratterman: "Did you say dragged through a lot of mud or drug through?  … A lot of sordid details have been mentioned in this court case. You don't like to get mixed up in anything of this nature. It's been particularly difficult for us because we knew the photographer's testimony would eventually come out … and it's extremely difficult to sit there and hear the things that are said that are perhaps damaging to one's reputation and not be able to get up and shout, 'I can prove this is all a frame-up. This is all false.'"

Anne Ratterman,  responding to a question from White,  got the last laugh.

White: "Mrs. Ratterman, you've maintained the most composure of anyone … How could you do it?"

Anne Ratterman: "At the risk of being facetious, I might say I had a little choral hydrate."

READ more about the rise and fall of "Sin City" in Maxim Alter's "Then & Now" series.