From The Vault: Tri-State's deadliest disaster 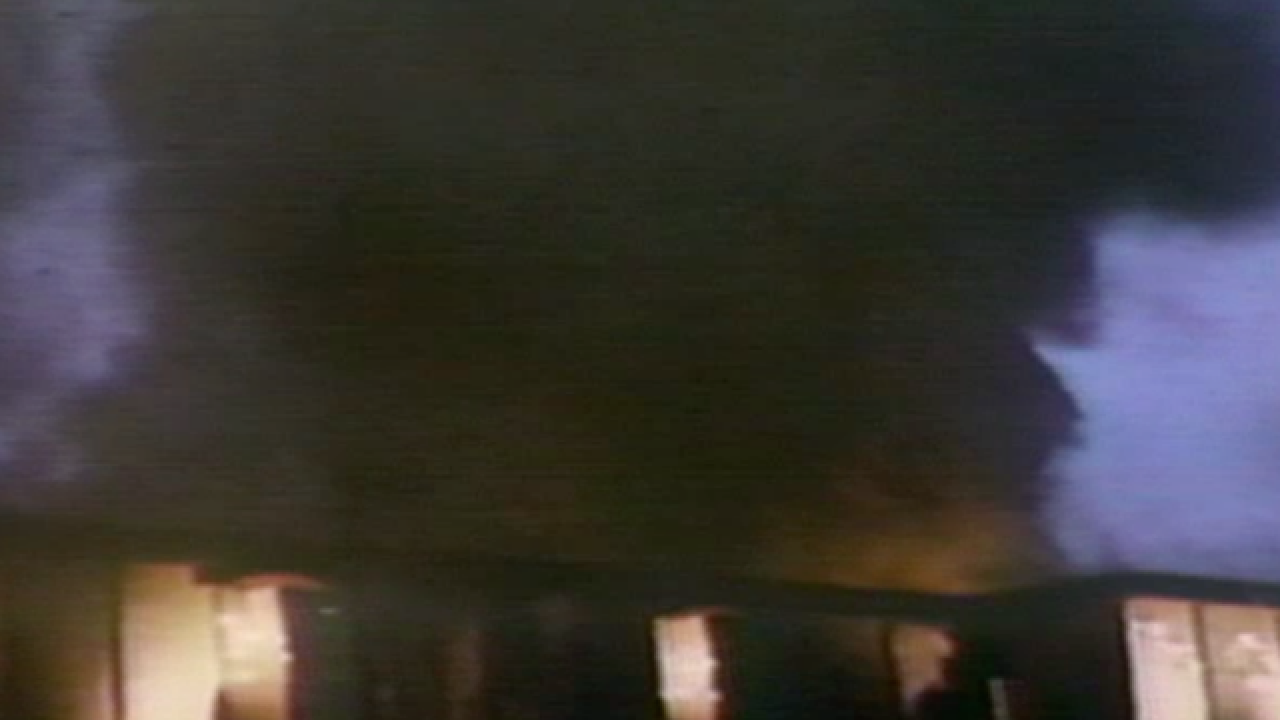 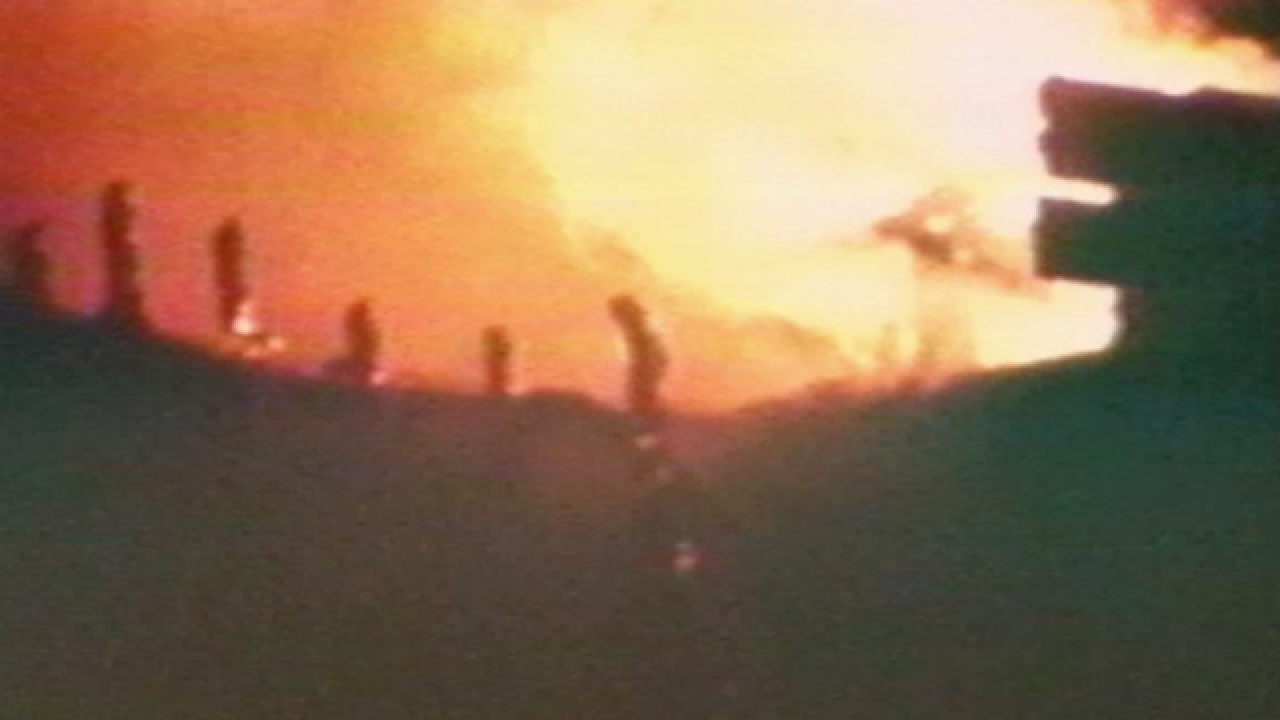 SOUTHGATE, KY. –  The horror that was the Beverly Hills Supper Club fire left survivors and rescuers with haunting images that wouldn't go away.

"When that alarm went off, the first thing that entered my mind was, 'Well, it's a grass fire, a Dumpster fire, something like that,'" said Southgate Fire Chief Dick Riesenberg, who was on the first truck to arrive about 9:05 p.m. on  that Saturday night, May 28, 1977.  "I couldn't believe what I saw when I got there."

He saw flames shooting out of the roof amid thick, black smoke. Patrons who could escape – some men in tuxes, some women in formal gowns - were running for their lives out of the two open  exits from the overcrowded Cabaret Room.

Inside, Kathy Smith was trying to find her way out in the darkness.

“By the time we got to the second door, all the lights were out and that's when it was completely filled with smoke,” Smith said. “All you could do at that point was put your hand on the wall and a hand on the person in front of you… I honestly don't know how long the hallway (in front of me) was, but the smoke was intense.”

An off-duty Cincinnati  firefighter, Peter Sabino, was having dinner  with his family. He made sure they got out, then he went back in. He helped several people escape, until the smoke and toxic gas and heat became too much to bear.

"I had a hold of a woman just about the time when I had as much as I  could take and I had to leave her …" Sabino remembered. "Just had to get out."

"There were bodies stacked up about that high inside the cabaret door," said Roy Howcroft, a maître'd who also became a lifesaver. "We pulled a couple of people out."

More than 160 people died that night inside the Beverly Hills Supper Club. More died at hospitals, until the death toll reached 165, making it  the Tri-State's deadliest disaster and the third deadliest nightclub fire in U.S. history.

By the next day, it was clear that the fire was a disaster waiting to happen. Employees estimated that up to 1,200 people – twice the legal capacity - were crammed into the Cabaret Room for popular singer John Davidson.

"I know it was overcrowded," said busboy Walter Bailey, describing how passages and exits were blocked.  "I helped a cocktail waitress put down chairs in the aisle, right at the steps … It was probably hard to get out to go to the restroom."

There were only three exits to the outside and one of those was locked, Bailey said. The others had doors that had to be pulled in, not pushed out. Smoke and fire blocked the exit  to the main hallway.

Bailey, 18, was hailed as a hero because he sounded the first alarm to patrons. Alerted to a fire in a nearby room, he rushed on stage during a comedy act and told people to exit. But some thought it was part of the act and stayed in their seats.

When the fire was out and James Lanagan, a steelworker inspecting what was left of the building,  entered the burned-out room, he couldn't believe what he saw.

"There were people just sitting in their chairs. It looked like a wax museum in there," Lanagan said.

The state fire marshal determined that an electrical fire had started down the hall in the Zebra Room and burned undetected in the walls and ceiling. When someone opened a door, it flashed over.  Toxic  fumes and smoke, fed by plastic coverings on draperies and seat covers, poured down the hallway and filled the cabaret.

People died from smoke and fumes, not flames. Their faces and clothes were blackened with soot.

Davidson said he escaped through a backstage door, but his musical arranger died. So did five members of the club band. Davidson went to local hospitals looking for his pal but found him the next day at the old Fort Thomas Armory, where the bodies were taken.

Teenage volunteers helped unload the bodies from ambulances and laid them in neat rows on the armory floor. Coroner Dr. Fred Stine organized a process to gather information from family members seeking their loved ones and, if necessary,  have them identify their bodies.

Clergy and nuns were there to comfort families and assist them. It was a shocking sight,  and a haunting experience for everyone.

"I have never, never witnessed an experience where you look across  the room and there are 50 to 60 corpses lying on the floor," said Father Thomas  Finn.

Some communities, like Wayne Township in Warren County, were hit especially hard by the tragedy.

Beverly Hills touted itself as the "Showcase of the Nation," and except for Las Vegas and Hollywood and New York,  no one would argue.  National headliners appeared there regularly. It was the place to go for a night out.

On that night, 37 people drove down to celebrate at a retirement party for a Wayne Elementary School teacher, and 13 perished, including seven teachers and staff. Some teachers and students were unable to finish the school year.

Principal Kenneth Hackler, who escaped the blaze,  said he did a lot of soul-searching afterward.

"Of course, the big question I had was why – why did it happen to us, or why did it happen the evening we were there," he said. "Why were the 13 people of our group killed? Why wasn't it me? Did God have something else planned for us?"

Four months after the fire, the Kentucky fire marshal issued a scathing report that blamed the Beverly Hills owners,  Richard  Schilling and his sons, for allowing overcrowding, not having enough exits, using inferior building materials and numerous other safety violations. The report also blamed state fire inspectors for allowing those dangerous conditions to exist.

Beverly Hills didn't have a sprinkler system,  but it was exempted from a state law requiring it in newer buildings.

Gov.  Julian Carroll testified before a congressional  subcommittee holding hearings on the fire at the University of Cincinnati and condemned the Schillings and the fire inspectors based on the report.

The Schillings did not face criminal charges.

The fire launched a remarkable career for attorney Stan Chesley, who took the case even though the money pool seemed limited. But Chesley's inventiveness turned the legal community on its ear. First, he won an unprecedented court order to stop demolition of the club’s ruins so his investigators could search for evidence.

He disputed the state fire marshal's report and called for a more thorough investigation.

Then Chesley came up with the idea to sue entire industries, now known as enterprise liability. He sued 21 manufacturers of aluminum wiring and products ranging from air conditioning to foam rubber padding. He sued Union, Light, Heat & Power and even took on General Electric.

The strategy worked, sealing Chesley’s place as a legal trailblazer.

He lost a trial in 1980 but successfully appealed. After that, the defendant companies lined up to settle. In 1985, GE settled for $10 million, and the case was over.

Chesley ultimately won more than $49 million for 281 claimants and launched a series of successful class-action lawsuits against tobacco companies, Pan Am and Dow Corning and gained the reputation of "Master of Disasters."

The Beverly Hills fire led to changes in fire codes and enforcement as well as improvements in product safety. And in Wayne Township, at least, it made people more fire conscious, Principal Hackler said.

"Personally, it's given me an entirely new outlook on life. I'm just tremendously happy to be alive."

He wasn't going to forget that night, nor was anyone else.

"Time has a way of healing wounds, I guess," Riesenberg said 10 years later,  "but I can still see it. I'll always see it."

MORE videos and stories about Cincinnati history in our "From The Vault" series.
RELATED: More stories about Beverly Hills survivors.