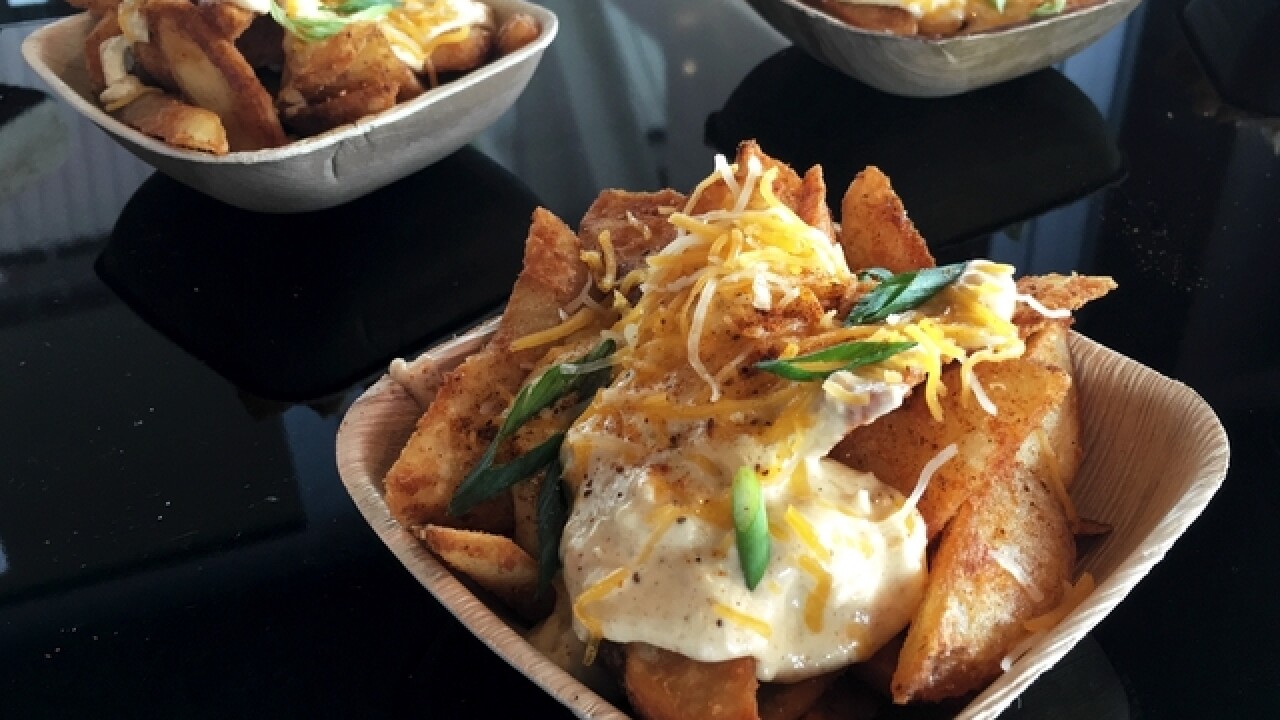 Brian Mains
<p>The Cincinnati Reds revealed the new eats and treats being served up to fans at Great American Ball Park this upcoming season. Pictured here is the Crab Box that includes fries covered with lump crab, cheese and seafood seasoning. It's available at the Fry Box.</p>

CINCINNATI — While Reds Manager Bryan Price pushes his young ballplayers during spring training in Arizona, chef James Major is doing the same with chefs and cooks at Great American Ball Park ahead of Opening Day.

“We are taking chances and risks,” Major said of the new foods visitors will see at the ballpark on April 4. “That’s been the most fun.”

The chef and his team put some of their new premium eats on display Thursday during the Reds' 2016 Media Day Tasting. The food will impress those who come to indulge in the whole GABP experience, from the food in the stands to the game on the field.

Because it feels obligatory, let’s start on the lighter side of food. Major said his team revamped and expanded the “Flip ’N Go” options sold at marketplace concession stands. Health-conscious baseball fans can grab a fruit cup, wrap or veggies in easy-to-carry containers. (The marketplaces also carry a nice variety of local and national beer brands in handy-to-carry cans.)

“Once we get out of that range, now it’s time to indulge,” said Major after running down the lineup of healthy food options. And first on the break-your-diet menu items is the “Flying Pig.” OK, this is more of a return than a new entry, but it's going to be difficult for any Cincinnatian to pass up a mettwurst wrapped in bacon and topped with hot peppers, pickled onions and honey creme.

And if that’s not your thing, surely the Montgomery Inn chopped brisket, smoked beef ribs slathered in Texas-style barbecue sauce or Kobe beef sandwich will tempt you to postpone your next cholesterol check.

Most people will never get past the Crab Box served at the Fry Box. This is a mound of fries buried under lump crabmeat, cheese and seafood seasoning. Folks might want seconds -- and stretchy waistbands. If that’s not your thing, also new this year are the Machine Room fries, topped with chili, queso and banana peppers, and the fajita bowl. (That's a bit healthier but is still full of carbs with its white rice, tortilla and queso.)

For folks who somehow manage to avoid most of the eats mentioned above, there are killer new desserts and treats at GABP this year. For example, say hello to Taste of Belgium’s Reds waffle. TOB owner Jean-Francois Flechet described his concoction as a marriage of his traditional waffle and American red velvet cake that is topped with a cheese creme and sprinkles. The ballpark also has put together a new ice cream stand that lets you coat vanilla ice cream with milk chocolate on a stick, then drizzle it with any topping of your choice.

And finally, Meijer’s is offering unlimited hot dogs, popcorn and peanuts for $20. That’s right: All-you-can-eat concessions for only $20. Don't hurt yourself.