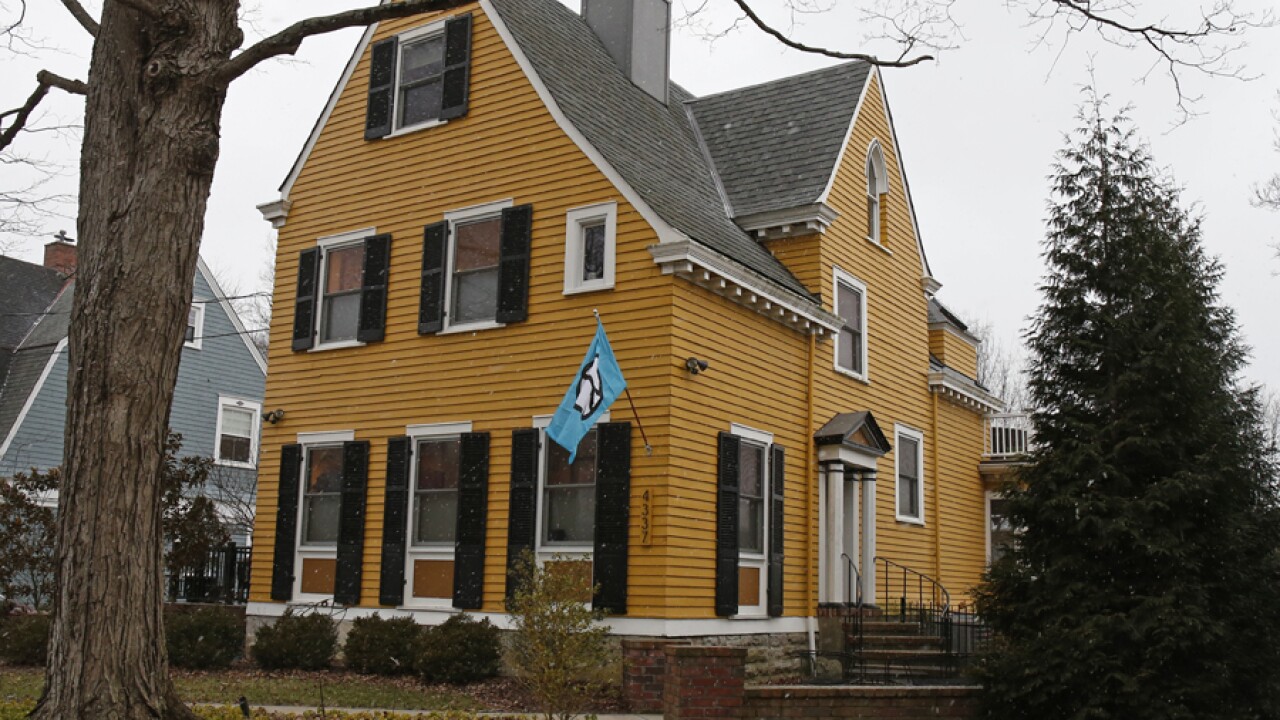 CINCINNATI — Homes are full of memories of the lives we live there, from the everyday moments to the big events, but few adults can say their memories of their home span an entire lifetime.

Mollie O’Neil can. She and her husband, Paris Traganos, renovated her childhood home in Madisonville into a beautiful space that’s equally perfect for entertaining or relaxing with their two dogs, George and Sophie.

“There are times when we’re like, ‘Do we really live here?' It feels pretty special,” she said.

Getting the house to that point wasn’t easy. The couple bought the home, in which O’Neil lived from birth until she got her first apartment, from her father in December 2010.

“He was ready to downsize when we were ready to upsize,” she said.

But the house, which was built in 1894, needed a lot of work. Renovating it took six months and included gutting every ceiling to replace the original plaster (and upgrade the electric and insulation, as well as add speakers and lighting, while they were at it). The home looked like “a rubble pile” for a time, the couple said.

Then, there were the walls.

“When I was a kid, I vividly remember when they took the wallpaper down,” O’Neil said.

That seemingly small task was significant because it revealed a long-hidden signature and date.

And it gave her artistic mother, who taught fashion courses at the University of Cincinnati for 25 years, an idea.

“For probably a good decade, we had buckets of markers out, and everybody who came over could write on the walls,” O’Neil said. “Everyone who came over was just fascinated. This house had a lot of character for a long time.”

The writing and drawings covered most of the first floor. Although the artwork was a source of fond memories, it also added an extra level of difficulty to the renovation work.

Beyond the repairs and upgrades, they also made some additions to make the home both more practical and more fun. On the first floor, they added a full bathroom and a cozy screened-in porch with a TV and fireplace. A second-floor deck, complete with a hot tub, plus a garage and a side porch were also among their additions.

“We worked hard to keep anything we did in keeping with the style of the house,” Traganos said of the work.

Once the renovations were complete, the couple furnished the light-filled home in their eclectic style. Furniture came from sources ranging from Arhaus to Traganos’ parents. Friends made some of their art -- including a stained-glass window -- but the couple has also picked up pieces while traveling as far away as Namibia.

Birds and animals, including some Charley Harper prints, are well represented, which might not come as a surprise if you know that O’Neil is manager of the volunteer and intern department at the Cincinnati Zoo & Botanical Garden. Traganos always admired the striking wood sculpture of a diver that belonged to his uncle. When he found out his uncle had put it in consignment, he immediately drove to Boston to get it.

Although the couple has certainly improved the home, it isn’t the first time in its long history that it has seen changes. Traganos said it went through a major renovation back in 1926. Before that, it looked like a more traditional Victorian with a wraparound porch, he said. He thinks there’s a good reason the owners would have preferred more indoor living space to a big porch.

“What was going on in 1926? Prohibition,” he pointed out. “Everyone was partying at home. They wanted bigger living rooms.”

That ability to host family and friends was part of the reason O’Neil and Traganos wanted the house.

“It just has a great feel for entertaining,” O’Neil said. “For an old house, it’s got a pretty open floor plan. That was our interest in upsizing -- we wanted to be able to entertain.”

They liked the location, too.

“We really liked the Madisonville feel,” O’Neil said. “We love the diversity of the neighborhood and where it’s headed.”

It’s also close to family: O’Neil’s father still lives in Madisonville, as do her sister, brother-in-law and their two kids.

Perhaps the best thing about the house is much less tangible.

“I just had great memories of this place,” O’Neil said. “I remember this place being full of great smells -- (my mom) was a great cook -- and music. There were always parties going on. It was always full of creative people.

“I just remember it being a house full of great juju,” she added.

“Once we’ve gotten everything done, you are right,” Traganos said. “The place just feels good.”