Home Tour: You can visit this renovated 1911 colonial at the Pleasant Ridge Tour of Homes 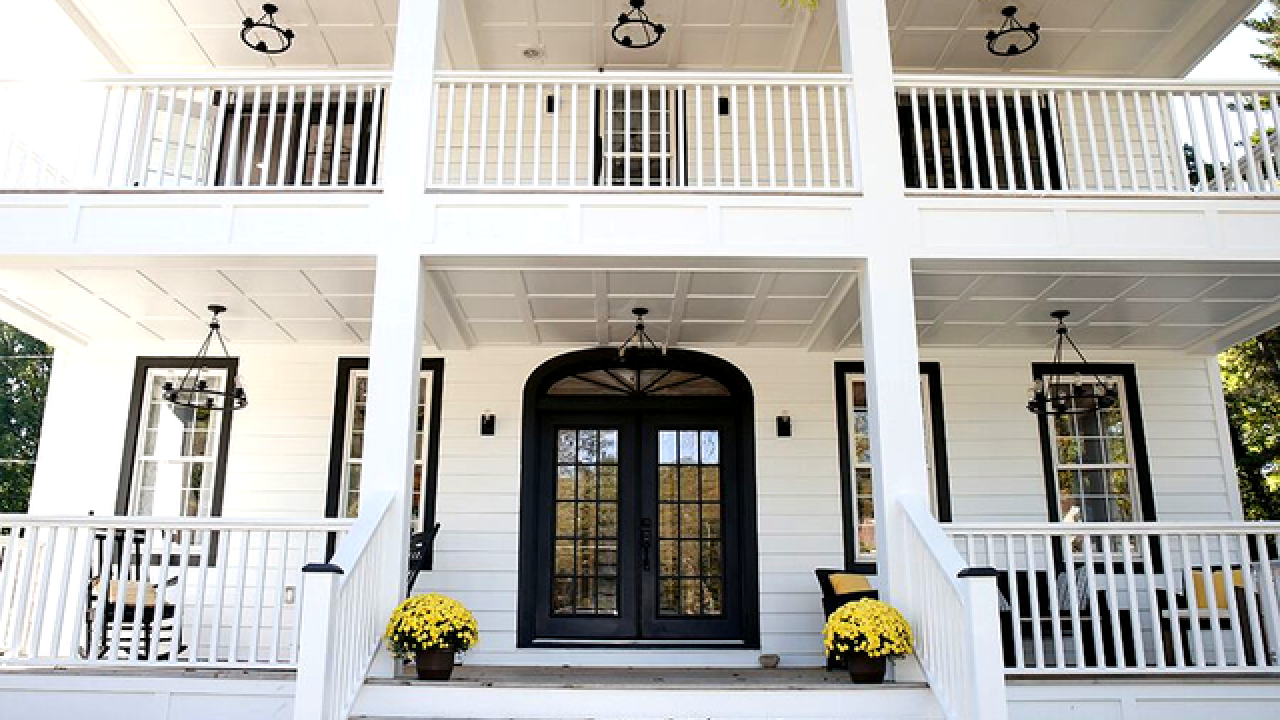 CINCINNATI -- With its gleaming white paint and two new, expansive porches, Tyler and Rachel Light's striking home looks as if it would fit just as well in Georgia as it does in their Pleasant Ridge neighborhood.

That out-of-the-ordinary look is no doubt part of the reason people have taken an interest in the renovations that T Square Construction, which Tyler co-owns with a business partner, has done on the 1911 home. The speed and extent of the work have also been a surprise to those who comprise the heavy foot traffic that passes the home, he said.

"Every day there was something different for someone to walk past," he said.

Tyler had a deadline to meet: He and Rachel moved in just a week before their April 2018 wedding.

Now, those who were interested in the renovation work can take a peek inside. The home will be one of nine featured on the Pleasant Ridge Community Council's (PRCC) Pleasant Ridge Tour of Homes on Saturday, Oct. 20.

At the Light home, visitors will see the results of Tyler's extensive six-month renovation.

Outside, he removed 20-foot bushes.

"You couldn't even see the house," said Rachel, who works as a nurse.

From there, he took down four 20-foot columns, which had been added as part of a 1927 colonial addition. (He repurposed wood from three of those columns to make the couple's dining room table.) Then he added new double doors underneath the existing large transom as well as the two sprawling porches, one on the first floor and one on the second, that run the length of the house.

Moving the driveway and the garage from one side of the house to the other created a yard where the couple's two dogs, Roman and Grizzly, can play.

Inside, Tyler removed the wall between the kitchen and the dining room to open up the first floor and added a landing at the bottom of the stairs. He exposed some brick in the living room and put in larger support beams than needed, adding to the space's modern farmhouse look.

Tyler reconfigured the upstairs layout as well, converting the fourth bedroom into a master closet and bath, with a shower that doubles as a steam room.

Removing carpet revealed hardwood floors that could be sanded and refinished, with new wood pieced in to match where needed.

As for decorating, Tyler and Rachel have similar taste.

"Our style is pretty neutral," she said.

In choosing colors and tile, they took inspiration from a lot of different places. As examples, the look of the hall bath was inspired by the Roebling Suite at Hotel Covington, while the couple saw the tile they wanted for the master bath on the HGTV show "Fixer Upper."

Because their move coincided with their wedding, the Lights got some new pieces for the space thanks to their registry.

The Lights are already ensconced in their new neighborhood. Tyler's company has plans to build homes on two lots down the street, and Rachel's twin sister lives a few houses away. In fact, she was the one who told them that the home's previous owner was looking to sell. It never went on the market.

As for the rest of the upcoming tour in their new neighborhood, the Pleasant Ridge Tour of Homes will cover approximately two miles and feature homes east of Ridge Road, south of Beredith Place, west of Grand Vista Avenue and north of Woodford Road. Proceeds benefit the PRCC, which funds safety, beautification and walkability projects in the neighborhood.

PRCC vice president Erin Fay, who is also a Realtor, got the tour up and running with the help of a team of volunteers.

"I wanted to create this event in Pleasant Ridge to highlight our incredible architecture and amenities, along with the walkability and character of the neighborhood," she said in a news release.

"Especially in the wake of June's devastating fire in the business district that destroyed beloved businesses The Coffee Exchange and Molly Malone's, this tour is a positive event that highlights many wonderful things about our community."

What: Pleasant Ridge Tour of Homes