Home Tour: What's better than a house in the KY woods with a view of the Cincinnati skyline?

'A great place for a family to sink into' 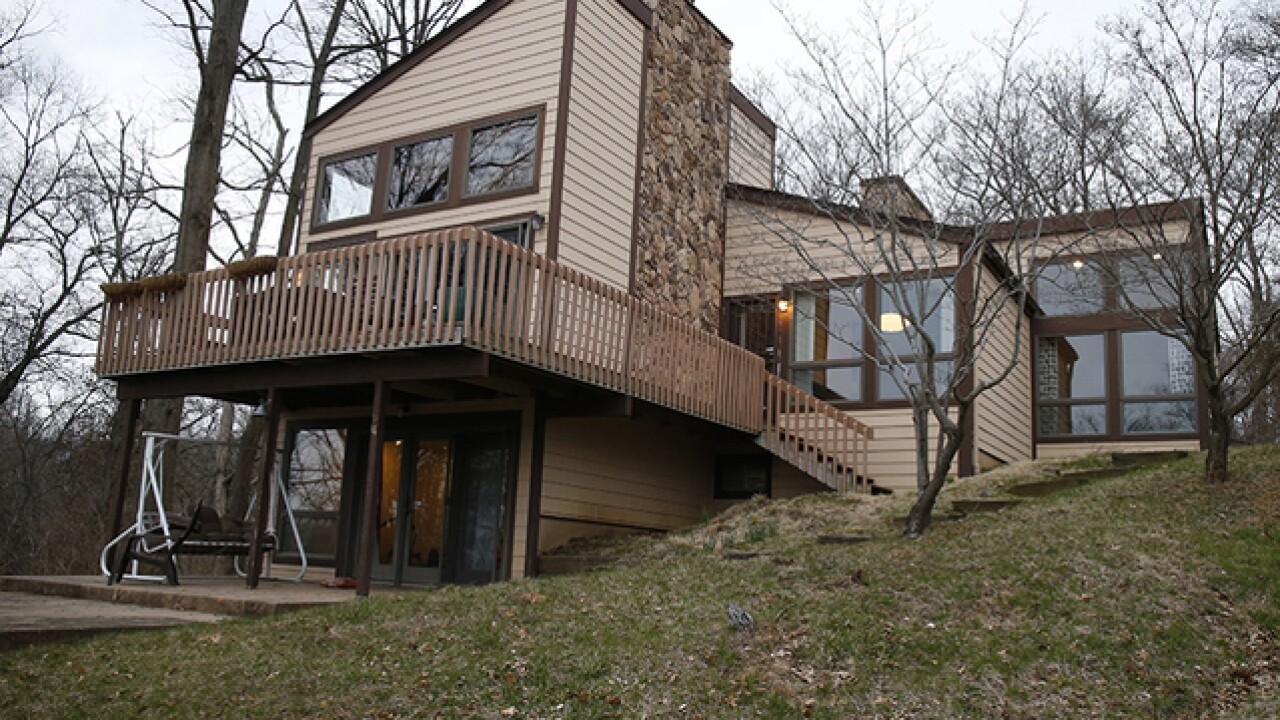 BELLEVUE, Ky. -- Stephanie Arvin searched two years for the right house to buy. The Georgetown College and Oxford University philosophy graduate stuck with her gut feelings during the process. Having grown up on a farm near rural Campbellsville, Kentucky, she knew she wanted a nice chunk of land.

"I just wanted to be able to come up my driveway and not see my neighbors, to be close to the city but also private," said Arvin, who had rented all around the area -- in Pleasant Ridge, Clifton, Covington and Newport.

Little did she expect her hairdresser would steer her toward a place that fit her bill: a 1977 modern house on a hilly, wooded, 1 1/2-acre lot at the end of Truman Lane in Bellevue that has a partial Cincinnati skyline view.

Arvin said she spent six hours touring the 1,509-square-foot, 3-bedroom, 3-bathroom house, trying to look beyond the gold-painted walls and the shaggy orange carpet in its 1,000-square-foot, walk-out basement.

"I just knew it was home," Arvin said. "There was something that felt kind of unique and special about this house."

She became its second steward in 2013, following in the footsteps of Jim and Anna Grau, who 40-plus years ago oversaw its construction with a keen eye for floor-plan flow, quality of materials and structural strength.

"It's like a fortress," Arvin said. "The place was impeccable. They took such good care of this house and loved it."

The house looks a little different inside since Arvin started making aesthetic changes upon moving in five years ago. Gone is all the gold paint, and several rooms have new uses.

At first, Arvin said she used the living room -- which features a 20-foot-high, stone-faced fireplace surround, six dark wooden beams on the slanted ceiling, and large, wood-framed windows that face west -- as her office. She painted three walls off-white and the largest one a warm forest green.

"I wanted it to feel like an extension of the house into the woods or the woods into the house," Arvin said. "In the spring and summer, you feel like you're in a tree house or a chalet in Gatlinburg."

That feeling extends to a large deck made of a durable, wood-alternative material that extends over a concrete patio below and has a view to her 3 1/2-year-old son Luke's play set and a line of trees through which can be seen Newport and Covington, as well as Cincinnati's Carew and Great American towers and the Big Mac Bridge.

Wildlife frequents the side yard throughout the year.

"One of Luke's favorite things every day is seeing the deer on the hill by his play set. He always tries to pet them."

Arvin's office is back to being the living room and has moved to the opposite corner of the house, where designer Aubrie Welsh helped create the perfect place for Arvin's Kohler & Campbell piano -- on which she plays Southern Baptist gospel songs -- her desk, and collections of author-signed novels and philosophy books.

Between those rooms is what had been a dining room but is now Thomas the Tank Engine Central for Luke. The "Train Room" features slate-blue walls and a glass door to the deck and stairs down to the patio.

The house's character is heightened by a 3-foot by 9-foot stone and glass cabinet between the office and entry hall that features five shelves and connects to a skylight. Arvin said she can imagine how pleased Anna Grau was that her husband's plans included such a grand display case.

"I always thought it was so sweet for him to design that just for her glass collection and that you see it right away when you walk in," Arvin said.

Also harkening back to the late 1970s are several features in the galley kitchen and window-lighted breakfast nook.

White Corian countertops and green-washed oak cabinets that still sport their Kitchen Gallery of Cincinnati stickers from 1980 flank the room. Inset on one countertop is a textured-glass cutting board. Also original is a built-in, roll-top bread box and a Litton Micromatic wall oven.

The kitchen, Arvin said, has been a bone of contention between her and several real estate agents who have toured the house in times when she has considered selling.

"Every Realtor I've had in the process of selling the house, every one has said I should rip this kitchen out," she said. "But I think it's kind of neat. It's homey."

So is the house's bedroom wing at its east end. All rooms are of good size -- who wouldn't want their child to have one as big as Luke's? -- and the master suite includes a soaking tub with its original gold-colored fixtures.

Arvin said she's on the fence about selling her house. It has been a great family home, especially for Luke, who has taken over much of the basement.

"This place has been fun. It's a great party house with so much space for people to mill around. ... It's not a showcase, just a great place for a family to sink into."