Home Tour: West Chester landscaping is architecture-inspired in the front, resort in the back 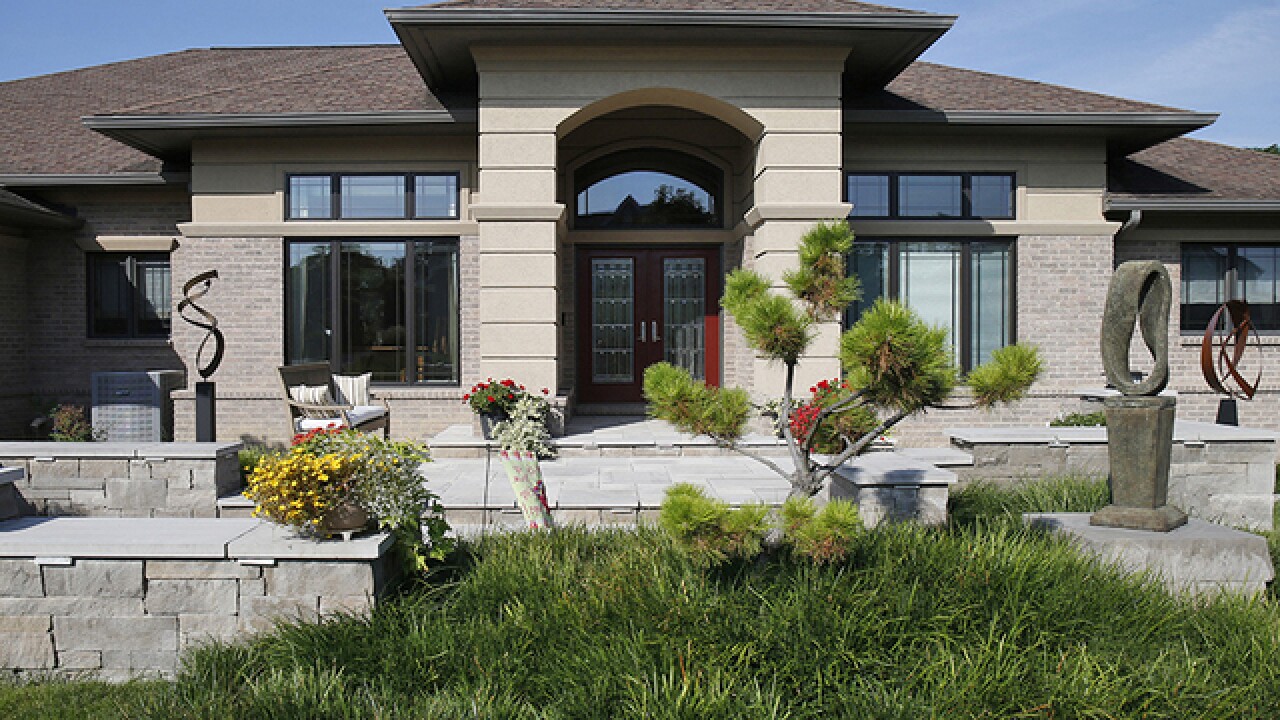 WEST CHESTER TOWNSHIP, Ohio -- Sue and Tom Haberman have moved at least a half-dozen times over the years, but since 2005, when they found a then-2-year-old home with prairie influences in West Chester, they've stayed put.

"I've never lived in a house this long," Sue Haberman said. "I like change; I like things to be different."

So although they've given up their nomadism, things at the home haven't stayed the same. Mostly, they've focused on changing the home's outdoor spaces. The first step in creating the resort-like backyard they have today was adding a pool back in 2007.

"It's one of the best things we ever did -- we don't have to go anywhere in the summer," she said.

In fact, the couple's friends from their junior high and high school days in Iowa now like to come for an annual "staycation" at the Haberman home.

Since that project, there have been many more. Near the pool is a stone patio that includes a bar/eating area, over which they added a pergola to create shade in 2014.

Then, in 2016, the couple turned their attention to the landscaping. It started with a desire to remove overgrown trees and shrubs that were obstructing the front of the house and to create a front lawn that fit with the home's prairie influences.

In addition to replacing the overgrown flora and straight sidewalk, DeVore expanded the front landing to a scale that's more in keeping with the home's large columns. Custom-cut Indiana limestone let them create the desired patterns.

An additional retaining wall and smaller half walls, with tapered columns to hold prairie-inspired light fixtures, and platforms for sculptures complete the hardscape. An added "stream bed" lower than the foundation isn't just for looks -- it also helped with drainage issues. The grassy lilyturf planted along it "really does blow like a prairie," DeVore said.

"The essence of the front is simplicity -- clean lines," he added.

While planning the front yard makeover, the Habermans also started thinking about how to make the backyard more livable. Though it was large, a lot of the space was taken up by a three-tiered composite deck that they never used.

Working with DeVore, they came up with a plan and implemented it in 2017. They removed the deck and extended the stone patio, which also includes a stone fireplace. A new small, marble deck attached to the house now holds the grill, making it easy to carry food in and out. They also leveled the sloped yard to make it useable for yard games.

Natural sandstone outcropping walls gave a little bit of the "Colorado" feel that Tom wanted for the space.

"I try to fit things together how nature would move them," DeVore said. "Water and gravity would move rocks until they all fit together.

"I've spent my life in wild places," he added. "When I build these things, I'm building from my spirit."

If visitors can tear themselves away from the backyard and go inside the Haberman home, they'll find nods to the prairie style in many of the details there, including in the furniture and light fixtures.

"I've always loved that style," Sue Haberman said. "Everything I've tended toward has always been that style, no matter what house I've lived in."

A large, open kitchen and living room create a "great room" feel just inside the home. Upstairs are two bedrooms, with three more downstairs. The couple's two sons were in junior high and high school when the family moved in, so that was their domain back then. Now, there are two more guest bedrooms and an exercise room.

The downstairs common areas include a mini theater; a game room, complete with pool and Ping Pong tables; and a bar area.

Haberman said she's ready to revamp the interior next.

"We love the style of the house," she said. "We're empty-nesters, so we don't need a different house. We just need to make it the way we want it."