With a few weather-related features 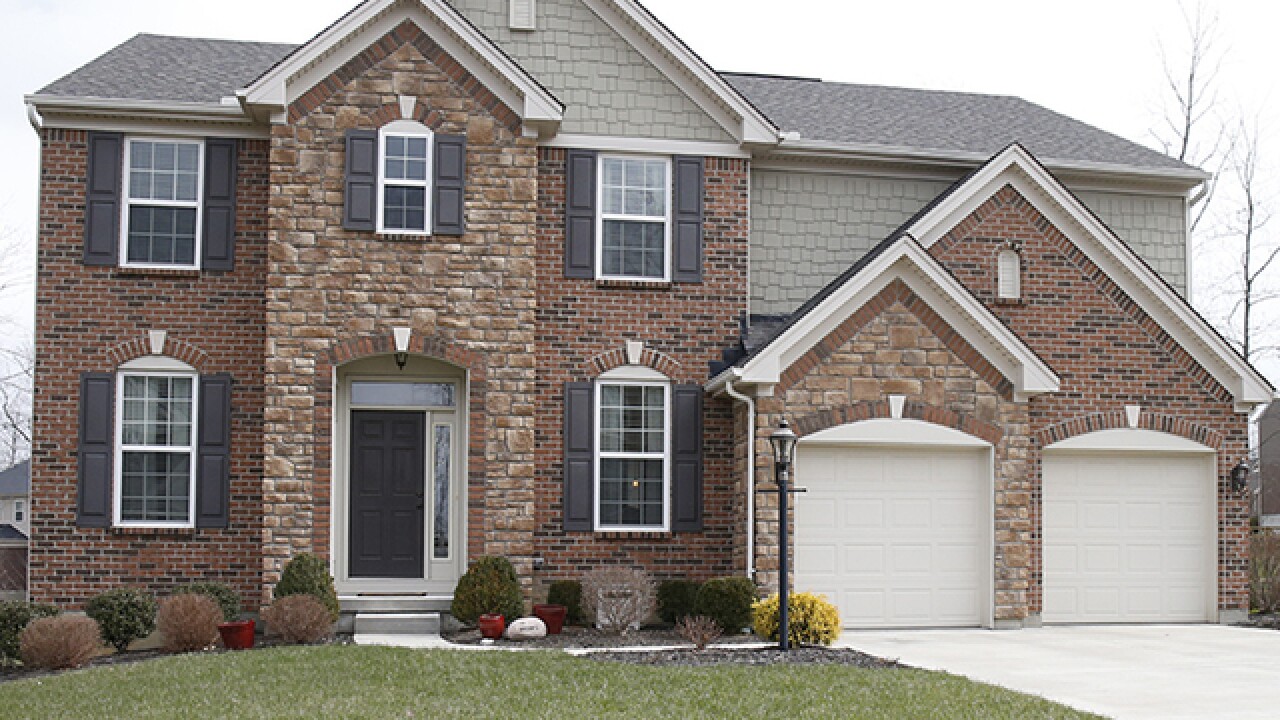 UNION, Ky. -- "As quirky as I am on TV, my home is pretty tame," Jennifer Ketchmark mused from her two-story living room, snow falling outside the long row of windows behind her.

The flurries were a fitting accessory for the home of the morning meteorologist for WCPO's "Good Morning Tri-State."

If their home has a theme, "family" is it. From the photographs lining the walls to the pillowcases Ketchmark sewed to represent their former home states of Illinois and Indiana, the home's little details chronicle the shared history of everyone who lives there.

Despite its neat, uncluttered appearance, Ketchmark describes it as a home that's meant to be lived in.

"I would not call any room in my house formal," she said. "We don't have pretty furniture. We have 'use it' furniture."

Her family even factored into her choice of paint, in neutral hues except for the rich blue in the dining room.

"The secret with little kids is, don't go too dark with the paint, and get a flat paint" because a build-up of shine doesn't show when you do touch-ups, she shared. She estimated that she's painted one particular wall 10 times to cover up little handprints.

That said, the kids are welcome to help decorate.

Stella helped choose things for her room, including the Boston terrier art that reminded her of Fenway. Conner isn't yet old enough to make those choices, so Ketchmark painted his room a neutral gray that can be customized when he gets older. (In the meantime, the celestial decorations and yellow curtains Ketchmark sewed give it a cheery feel.)

For her most noticeable piece of art, Ketchmark chose a reproduction of a print from the Jeff and John Winkle Studio in Ludlow. The canvas shows the Roebling Suspension Bridge, with vivid pops of color from purple flowers and a bright blue sky inside a handcrafted frame. It's large enough to make a statement, and she knew it would be the perfect focal point for the living room.

Just off that living room, the open kitchen is a hub for the family and the place her husband makes "a phenomenal meal" each night, she said.

Because the home was new when they moved in, the family made very few updates. One exception was adding molding over the fireplace in the two-story living room, a look Ketchmark saw on Pinterest and had a handyman replicate as a way to fill the large wall space.

Adding beadboard, a shelf and cubbies created a small mudroom in an area off the garage. In the back yard, where a dozen dead ash trees had to come down, the family had pine trees planted and created a shaded mini-playground under the deck.

Although it's definitely fit for her family, the home also works for Ketchmark's less-than-typical schedule. So she can be ready to deliver the morning weather forecast, her alarm goes off at 1 a.m. and she's out the door by 2.

"I have to be careful and quiet because everyone is asleep," she said.

Being prepared is a big part of that. Her favorite thing about the master bathroom is the large walk-in closet that runs its full length. She uses that space to stay organized, moving five outfits to the front each week so she isn't searching for something to wear.

So far, the home has worked well for the family's needs.

"We're three-and-a-half years deep, added another kid, and it still works," she said.

That's how long ago the family moved to the area from Indianapolis, where they had lived for three years, so she could take the job at WCPO. That decision, too, was about family: Ketchmark wanted to get back to a Monday-through-Friday schedule.

"Weekends off with my family is so imperative," she said.

The builder home in Union appealed to her and her husband for practical reasons: They liked the school district and lower property taxes. It also was move-in ready and had a finished basement, adding extra room for the kids to play, and the country club setting gave them access to a pool and other amenities. Proximity to the highway made it easy to get to the places they wanted to go.

But there also were intangible reasons: The area's quiet feel and they know everyone in the close-knit neighborhood.

"I grew up in a small town, graduated with 89 kids, so having that small-town neighborhood experience for my kids was important," Ketchmark said.

As a meteorologist, she also considered things many house hunters wouldn't, such as where the sun rises and sets. At their Union home, she appreciates that the main living room and the master bedroom, rooms the family uses often, aren't in the sun during the heat of the day. And only someone in her line of work would point out that a basement guest room would make a good tornado shelter.

Ketchmark's meteorological background even came into play when choosing a city to live in.

"I wanted a town with four seasons. That has always been a meteorological necessity for my job," she said.

Even winter, bringing what she describes as the "infectious excitement" of a first snow, has a place in her heart.

After hearing her speak so passionately about her work, it's surprising to know that Ketchmark might not have become a meteorologist at all. She started at Eastern Illinois University as a marketing major, but a meteorology elective completely changed her path.

"I couldn't put the book down," she recalled. "It was enthralling to me."

It's a good thing she loves what she does.

Oh, and those flurries out the window?

Yep, they were in her forecast that morning.