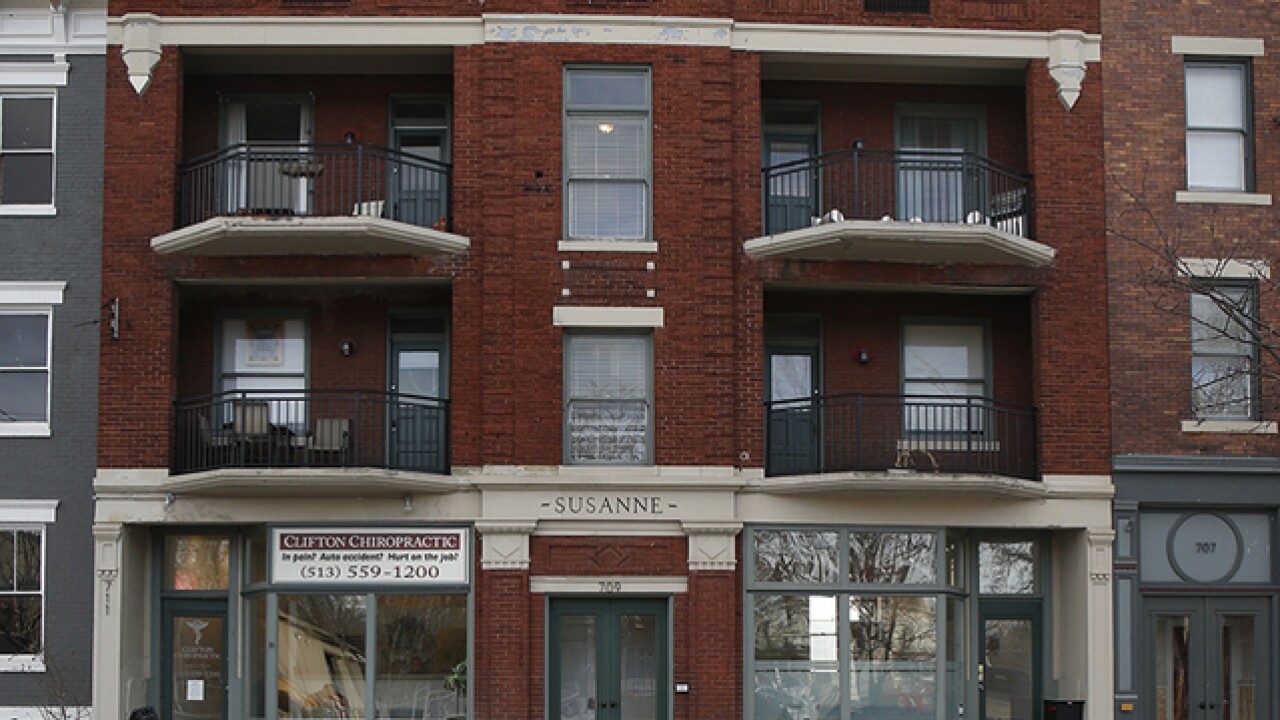 "Out that window," Thomas said, gesturing to her south-facing kitchen window, "there's a great view from Carew to Great American (towers). I'm so connected to Downtown."

That connection is paramount for Thomas, who most recently lived in a modern Mount Auburn home with a skyline view. She said she's also connected to Walnut Hills, where she owns property she plans to develop.

"I really believe Walnut Hills is 'OTR 2' in a lot of ways, but maybe not on the same level," Thomas said. "I just saw potential for its dollar value down the road."

Plus, Susanne Flats builder Ed Horgan and his Agid Properties partner, Marc Gilioli, agreed to strip everything that had been done in the 128-year-old space -- except the floors -- and work with Thomas to customize it.

Their starting point hit the mark for Thomas, who said she had a wish list that included gated parking, a balcony big enough for a gas grill and a couple of chairs, 1,200-1,500 square feet of living space and natural gas cooking.

"This place, I couldn't believe it. It fit all my criteria, but what really sold me was what's going on around here," Thomas said of the accelerated development centered around Peebles Corner, which is just two blocks east of Susanne Flats.

Before talking more about her condo, Thomas described the construction projects and millions of dollars in investments planned for streets near the intersection of East McMillan Street and Gilbert Avenue (Peebles Corner) of which the redevelopment of the old RKO Paramount Theater "is the real linchpin."

She said she's excited for what's to come in Walnut Hills: a microbrewery, bakery-coffee cafe, high-end bar and numerous apartments and condominiums. She would be even more excited if a grocery store were to become part of the redevelopment of the neighborhood's shuttered Kroger store.

There's a tiny lobby at the bottom of tunnel-like stairs leading to Thomas' second-floor unit, which is above a street-level retail/office space. The inside of the condo feels plenty big, especially for one person and a dog.

Thomas' 16-foot-wide condominium has three substantial rooms and two full bathrooms. The decor is modern with a little throwback in the form of her Hollywood-themed bedroom.

"This is supposed to look like Marilyn Monroe's bedroom," Thomas said. "It's so cozy. I sleep so well in here. It's just like my old room, but it's more compact."

Her walk-in closet by Closets by Design is compact, too, but it works for Thomas because it's so organized.

"I took pictures of my old closet and told them, 'I need this and this.' They did a beautiful job."

The two bathrooms share the color palette Thomas and interior designer friend Patti Marshall carried out throughout the condominium: black, white and gray. They used standing mirrors to expand the narrow space and gold touches for bling.

The one room that doesn't look like it's staged for a magazine photo shoot is the central bedroom suite, which Thomas uses as an office and gym. Always at her side, Rusty has his own bed next to Thomas' work desk.

Thomas, who hails from Florida and has been a Realtor in Cincinnati for 15 years, looks forward to sitting on her rounded patio hovering over East McMillan. Neighbors should be prepared to get a "howdy" from her as they walk up the street toward nearby Fireside Pizza or, in coming years, the brewery at Peebles Corner.

"I love it here," Thomas said. "All my neighbors are young married couples in their late twenties or early thirties."

She said she expects many more urbanites who desire the lifestyle of Over-the-Rhine will discover Walnut Hills in coming years.

"OTR's already gotten too expensive for certain people, and that's why (residential development) has extended to Walnut Hills," Thomas said.