Home Tour: Vivian Lofts in Over-the-Rhine give off an inviting rustic-urban vibe

Distressed property now a blend of old and new 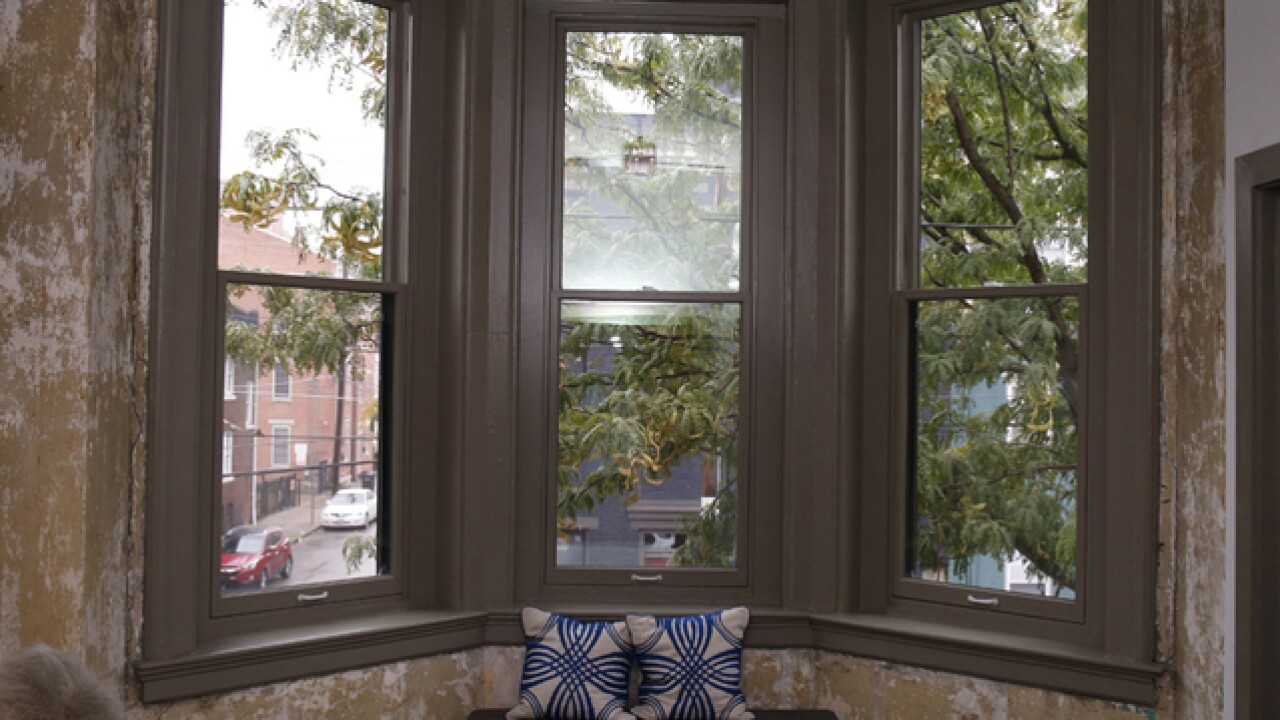 Copyright 2017 Scripps Media, Inc. All rights reserved. This material may not be published, broadcast, rewritten, or redistributed.
Gary Landers | WCPO contributor
<p>A bay window in a bedroom, photographed in a condo at Vivian Lofts in Over-the-Rhine, shows the combination of old and new that makes these lofts so special.</p><p> </p>

The four-story, 1890 tenement house in Over-the-Rhine that his ES Properties company bought from 3CDC (Cincinnati City Center Development Corp.) two years ago is a case in point.

So does the old-meets-new beauty he added to an abandoned tenement house that many would have considered an ugly duckling.

"When we started, this place was so deteriorated it was almost cool-looking in my mind," said Siemer, who named it Vivian Lofts after his daughter. "It has this gorgeous Empire architecture, and I love the staircase. I loved everything about it when we saw it" in March 2016.

"Ean had this vision, but me being less experienced, it was very scary walking into this building," she said.

Darkness dominated her memory of that day. Many of the building's windows were boarded up and there was residual soot on some walls from a past fire. Paint and plaster were peeling everywhere.

That's not the case anymore. All 74 windows, by Pella, are new and energy-efficient. Siemer made sure they still look old, however. Their wood trim was removed, stored in the basement and then painted gray and put back up.

The eight units, which range from 650 square feet to 900 square feet in size (four are under contract), feature a master-bathroom suite and a powder room in the living area. Their kitchens feature dark wood cabinets, light quartz countertops, stainless-steel appliances and clear, globe pendant lighting.

The building that Siemer said housed about 25 families in its first 40 years had been abandoned for about 15. Its bones, however, were mostly sturdy as 3CDC fortified it structurally.

"We were looking for something that was big enough but not too big we couldn't handle," said Siemer, who estimates he has rehabbed 60-70 old and distressed residences, many in Cincinnati's Uptown neighborhoods surrounding UC. "This building hit the sweet spot for a company like ours that does boutique projects."

The eight units were walkable, and some of the plaster walls were rough but salvageable beneath crumbling and peeling walls, graffiti, missing architectural details and other typical distressed-house damage.

Siemer's overall goal was to save what he could of the building's historical qualities and blend in modern updates to create a cool-chic feel in every room.

"People look at you like you are a little crazy, but I said, 'Yeah, I'm keeping that," he said. The keepers include brick walls where possible, the spindled staircase, the pine hallway floors and the wood trim.

Chic additions include white oak floors treated in a light gray vegetable-oil wash that holds up to heavy traffic and blown-up "before" images of details in the building that hang in the hallways.

Siemer estimated it took about 100 workers -- carpenters, plumbers, electricians, fabricators and other vendors -- to complete the project over a year-plus period. Demolishing the space to the "sticks and bricks" stage lasted 90 days, Siemer said.

"It's fun, but it's a lot of work. You have to have a special kind of sickness to enjoy this kind of work," Siemer said.

Siemer, who is a central Ohioan with a degree in marketing and real estate from the University of Cincinnati, and Catalanatto, who grew up in Miami Heights and graduated from Northern Kentucky University, have worked together for four years.

They combed the internet and Craig's List for special historical touches and drew inspiration from buildings around Cincinnati as well as places they have frequented, such as the heavy brick-and-iron Blind Lemon bar in Mount Adams and Wooden Nickel Antiques a block away on Central Parkway.

"There's inspiration all around Cincinnati that is manifested in these units," Siemer said. "You see something and say, 'I want to try that.' And of course, it always ends up costing more than you expect."

The four units on the Elm Street side of Vivian Lofts are the smallest. The largest of the four back-side units is on the top floor and features sweeping views of about 10 church steeples, old Over-the-Rhine rooftops, Music Hall and the downtown skyline.

The bedroom alone, which has a new vaulted ceiling where there had been a low one typical of 19th-century buildings, has 10 windows, one diamond-shaped with an idyllic view of Mount Auburn. The unit's natural lighting also is maximized by three clerestory windows above the kitchen area.

In contrast, the kitchen across from the fireplace is modern to the max. The lower-ceiling kitchen's focal point is a quartz-topped, pentagonal island that is large enough for food preparation and dining for two on stools. Hidden around the corner are 4B's laundry and powder rooms.

There are no barn doors leading to the back units' bedrooms, just standard solid ones with period hardware. A surprise, however, awaits beyond the door in 4B: a large loft enclosed with a bronzed steel bar and wood-topped railing. The catch is, the only way to get up to the loft is to climb a pivoting ladder at the far end.

Siemer said the loft would make a great office or art studio. Or it's possible that natural-born ladder climbers might choose to put their bed up there and use the main floor for that purpose.