Home Tour: This Tiny Row House, like its history, is colorful and full of surprises 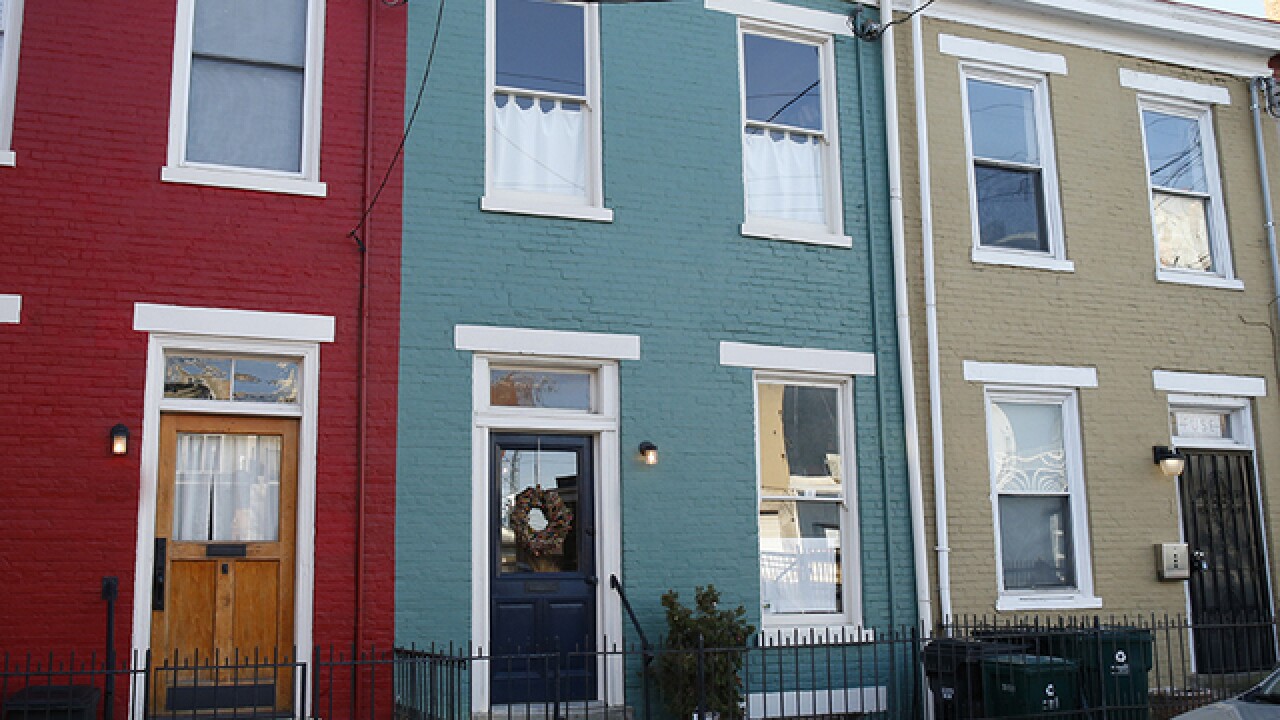 CINCINNATI -- On Magnolia Street, between Central Parkway and Elm Street, you'll find a colorful collection of pre-Civil War row houses that have been recently renovated and revived.

One belongs to Margy Waller, who always refers to her home by its proper name: the Tiny Row House.

The 1,400-square-foot home, which comprises two light-filled floors and an airy attic "sleeping cave," is the project she didn't know she wanted and a celebration of Cincinnati.

Waller, like so many people who grew up in the Queen City, moved away but returned. A senior fellow at Topos Partnership, Waller has been actively involved in Over-the-Rhine and other creative place-making projects around the city.

In 2013, she was renting in Over-the-Rhine, thinking about buying in the neighborhood, when the first Lumenocity happened.

"Right after Lumenocity, we saw people walking down here with clipboards. It really opened people's eyes to what was down here," Waller said. Her dad, Dick Waller, advised her to buy before she was priced out.

Waller had been looking for a turnkey place in Over-the-Rhine, but she loved her street's diverse families and was interested in the Tiny Row Houses just across from the place she was renting on Magnolia. She sent postcards to all the owners, asking if they would consider selling, and plied the mail carrier for details about the occupants. Finally, one was willing.

The row house had been empty for years because of minor water damage, and a 2005 renovation wasn't great aesthetically but had added an HVAC system and updated electricity. Waller decided to take on the restoration of the Tiny Row House.

She laid out rules: Save the history; reuse and salvage; employ local artists and makers (or U.S. artists and makers, if local wasn't an option); buy local and national; and, finally, no IKEA. Then she hired 8K Construction , a local company that specializes in historic renovations.

"They taught me a lot about what was possible when it comes to salvaging," Waller said.

She points out the wooden knob on the basement door. When they found the knob, it was covered in layers of paint. Someone from 8K spent an entire day stripping and polishing it, and now the knob looks like something you would find at Elm & Iron.

Once the Tiny Row House was gutted, work began with the floors. Waller wanted the original wood floors, but getting to them meant ripping up carpet and pulling up the thousands of nails holding down a leveling layer of luan.

Finally, wide pine boards were revealed -- the attic boards are nearly 18 inches wide. They're pock-marked with nail holes and a few spots had to be patched, but the warm wood grounds the house, with its airy white walls and bright furniture and artwork.

"I like the history of them," Waller said. "I like looking at them and thinking about who walked there."

One of those people was union advocate and activist Betty Reeves. According to local historian Anne Senefeld, Reeves lived in the Tiny Row House when she was charged with accessory to robbery during the Garment Workers' Strike of 1919. Reeves and another picketer tried to persuade a nonunion worker not to deliver coats; another picketer stole the coats, and Reeves was charged and convicted. In a 1920 appeal, famous attorney Clarence Darrow represented her.

The Tiny Row House, like its history, is colorful and full of surprises.

Tucked on the floor between the toilet and sink, colored tiles spell out "Hi!" All the tile in the house was done by Rick Wolf. The kitchen backsplash includes a map of Cincinnati circa 1842 and marked with modern landmarks important to Waller. Vintage wallpaper salvaged from the attic ended up in the bathroom, too.

From the dormer window added in the attic, you can see the back of Music Hall.

"You know my parents played in the Symphony? I basically grew up there, so this view means a lot to me," Waller said.

The new window also floods the room with light, which filters down to the second floor, thanks to an open staircase made of wood salvaged from a Northside building and a wrought-iron railing custom-made by Joe DeLuco.

"Opening up the attic really changed the feel of the whole house," Waller said.

The attic stairs land in a room Waller uses as a walk-in closet. A drawback to a home nearing 200 years old is its lack of closets -- there's one in the whole space -- but standing in the dressing room, complete with a working, salon-style hairdryer, this feels like a feature, not a bug.

Still, moving into the Tiny Row House meant downsizing and giving away furniture and clothes, Waller said. It became another project.

She replaced her furniture with vintage pieces, including a massive old dining table from her father and a couch and chairs sized appropriately for the Tiny Row House and custom-upholstered in rich, vibrant fabrics.

Waller said this is the first house that has really reflected her love of color -- partly because of the things she found for it. The mantel, for instance, was discovered at Building Value, already painted turquoise, and the multicolored collection of vintage knobs that brighten the kitchen began with a green glass knob saved by Waller's great-aunt.

Open shelves in the living room of the Tiny Row House serve as a museum of sorts of art Waller has found in Cincinnati and on her travels around the country. There are vintage phones, and flowers commemorating one of President Obama's inaugurations. Above the mantel hangs a picture of people painting the streets in Over-the-Rhine, a creative place-making event she organized years ago.

"It's good to be grounded in a place," Waller said.