Home Tour: This sweet Westwood cottage was ready for the wrecking ball when the Crosses bought it

Loving devotion -- and sweat -- turned it around 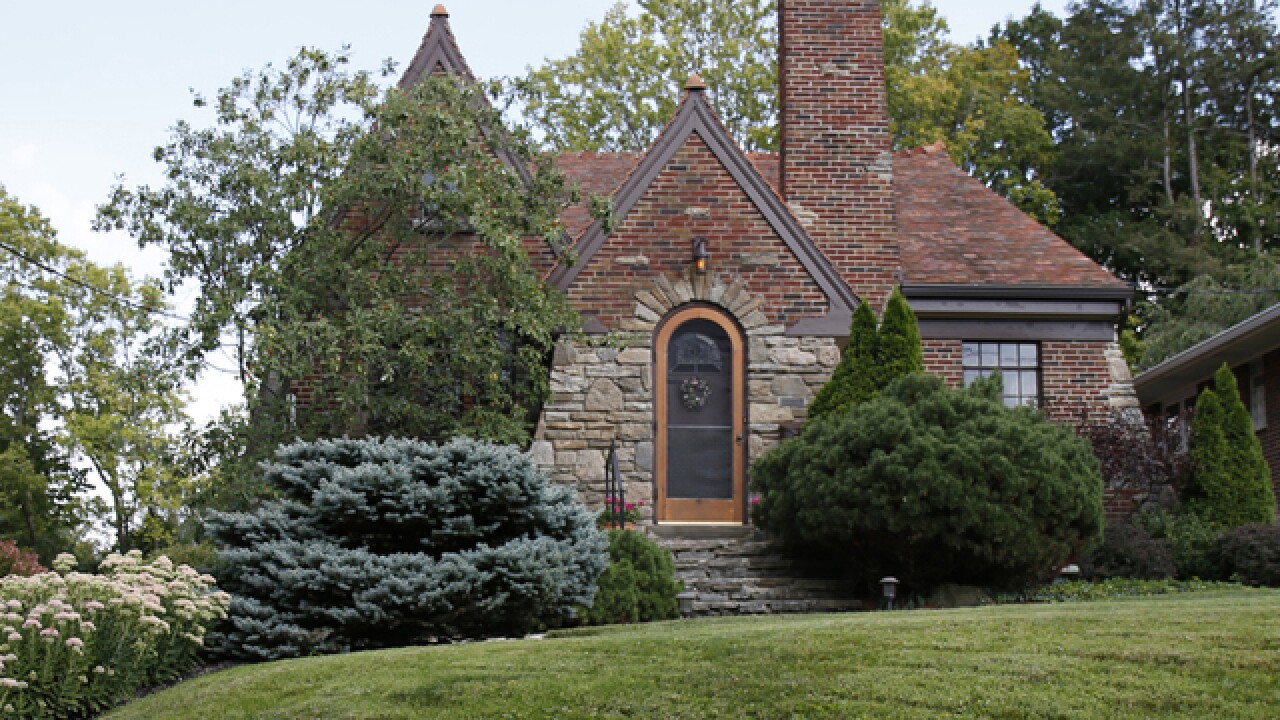 Copyright 2017 Scripps Media, Inc. All rights reserved. This material may not be published, broadcast, rewritten, or redistributed.
Gary Landers | WCPO contributor
<p>The front facade of the Westwood home of Ginny and Skip Cross.</p>

CINCINNATI -- Ginny Cross made two of the biggest decisions of her life in a snap.

She had to wait 27 years to carry out the first one: a vow she would marry Skip Cross that she made at age 18 when she met him at the Old E Tavern in Elizabethtown.

That was 1969. The American-born Canadian kept in touch with West Sider Skip and became stepmother to his twin daughters in 1996.

The second decision she made -- this time in 2006 -- bore fruit more quickly: She had an "Oh my God" moment when she laid eyes on a sorry-looking 1919 house while walking in their Westwood neighborhood. Right there she vowed to buy it.

Today, the now-98-year-old, sneaky-large English cottage is the Crosses' home sweet home, thanks to the retired teachers' devotion to a simple division of labor.

Skip summed it up this way: "I make sawdust, and she sets things on flat spots."

The 4-bedroom, 3-bathroom home was "calling out to the wrecking ball" when the Crosses bought it in 2006, Skip said. "We had ceilings on the floor and walls on the floor."

Every valley in the roof required new flashing. The driveway was too high and had to be lowered 30 inches. There was no central air conditioning, and the kitchen, which featured bright blue cabinets that Skip now uses in his tidy basement workshop, was a floor-to-ceiling gut job.

Most of the light fixtures were either missing or inappropriate, but the original casement windows and their retractable interior screens were in good, working shape.

Restoring the home was a big job, but Skip had been a house painter and had flipped a couple of houses before. He was up for the DIY job, which culminated when the former Diamond Oaks drafting teacher finished converting their neglected basement into a well-equipped workshop and a cozy pub room with full bathroom. Skip also redid the under-house garage, which is where he stores his 1962 Studebaker Lark convertible.

"There isn't a wall or a floor my husband hasn't touched -- even the driveway," Ginny said.

The brick and stone house's gables, terra-cotta tile roof and round-top and stained-glass front door give it what folks in the real estate world call a "storybook" look.

It appears to be average-sized from the front, but it has 3,800 square feet of living space beyond its short entry hall. First there's the spacious 16-foot-high vaulted and beamed living room in the front, then a large dining room and a modern kitchen in the middle and finally a vaulted family room addition in the back.

"This is where we live, basically," Skip said of the sunny room, which features about a dozen high, wood-trimmed Pella windows.

French doors in the sunny tile-and-carpet family room lead to a raised deck that Skip reconfigured. The neatly landscaped backyard the couple created includes mature trees that block the view of the neighbors behind their property.

Unlike a lot of similar homes in Cincinnati, the Crosses' has two bedrooms and a full bathroom on the first floor, making it ideal for stair-free living. The bathroom tiles, which were crafted in a subtle snail motif in shades of rose by Ernest Batchelder of Los Angeles, is Ginny's favorite original architectural detail in the house.

The shower and tub stall's fixtures, however, were old and oddly placed, so Ginny scoured the internet to find vintage porcelain replacements, and Skip found reproduction tiles that matched those that had to be removed during the installation.

The couple also reconfigured the closets in an adjacent bedroom, converting one to a double-doored, walk-through pantry to the bathroom, effectively creating an en suite for guests.

The changes the Crosses made in the bathroom were tricky, but they were nowhere near as laborious as the kitchen remodel. That's because it and the connected breakfast nook and hallway had to be refloored -- twice.

With the help of Ginny's brothers, Skip laid hardwood teak wall-to-wall and covered it with protective craft paper while installing new cherry cabinets. But the floorboards were cracked -- and ruined -- when the paper came up, apparently because their supplier hadn't let them dry fully.

"It was an absolute nightmare," Skip said.

With little time to replace the flooring before movers arrived, Skip had the floor inspected by a professional to prove he had done nothing wrong, which he hadn't. He then negotiated with his supplier to remove the teak and install cherry boards, ironically during a snowstorm.

The installers didn't want to drive through the snow, but Ginny made them, Skip said. He finished installing the cabinets at 2 a.m. on move-in day.

Through one of the house's many original poplar doors off the central hall is a narrow staircase that opens up to a wrap-around landing. The Crosses equipped the unusual space with multiple cabinets in which they store small items such as Ginny's dozens of photo albums.

The two second-floor bedrooms serve as the master and an office/yoga room for Ginny. They share a full bathroom.

Ginny credits Skip for making a miracle in their basement.

"Oh, my God. It was so ugly," she said. "There were pipes and wires everywhere. I could show you pictures. You'd die."

Skip's construction skills, however, came in handy again. He managed to hide the mechanical infrastructure and built new ceilings that are an impressive 7 feet high. And, he added a full bathroom in the pub room.

The star of that room is its bar top, which comes with a history lesson. Skip was outfitting his second tropical plant shop in Cincinnati 40 years ago when he bought the contents of the Kon Tiki Room in the old Sheraton Gibson Hotel at Fifth and Walnut streets. It was demolished in 1977.

Part of the two-piece bar top became a countertop in Skip's new shop. Half of the bar top moved around from family member to family member over the years.

"When we moved here, I said, 'I'm going to build this room around that bar,' " Skip recalled. He had to cut it down, but it's long enough to seat five friends and is a popular gathering spot when the couple entertains.

At gatherings such as Skip's surprise 70th birthday party in July 2016, the pub room, deck, family room, kitchen, dining room and living room are large enough to accommodate up to 90 people.

Maybe more than that, Ginny said, it's a charming house.

"It just looks like a little cottage," said Ginny, who lived for years in Toronto high rises. "That's why I love it. It's so cozy."