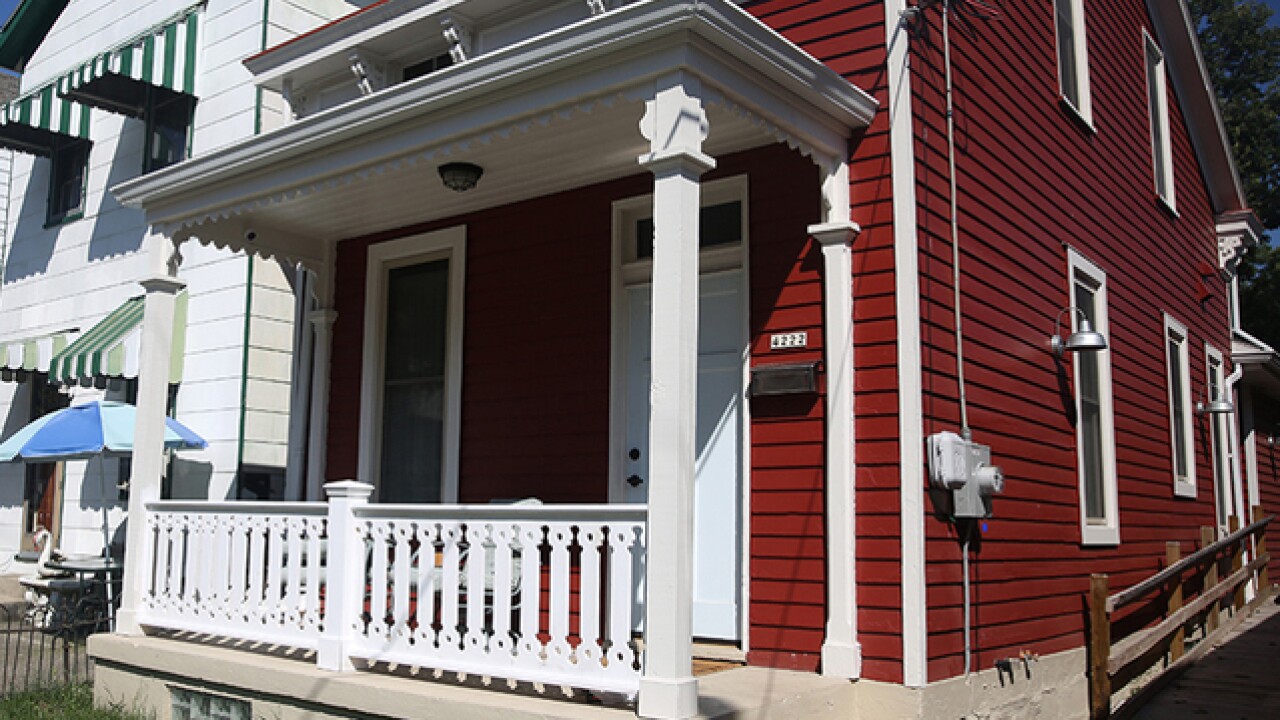 Copyright 2018 Scripps Media, Inc. All rights reserved. This material may not be published, broadcast, rewritten, or redistributed.
Leigh Taylor | WCPO contributor
<p>The exterior of Jon Pischl's home in Northside. The home has about 900 square feet and was built in the late 1800s.</p>

CINCINNATI -- Almost as soon as he stepped through the door of the 1893 Italianate shotgun-style house, Jon Pischl was ready to make an offer.

After all, the house had a lot to recommend it. It's small -- only about 900 square feet -- but still squeezes in plenty of storage space, including in its dry, high-ceilinged basement.

It also ticked a box on Pischl's checklist when it came to vertical space.

"One of my requirements in any house is high ceilings," he said. "Here, I have 10 feet, so I can fill the walls with pictures and paintings."

And though it had the character you'd expect to find in an old house, it was also newly remodeled. Northsiders Engaged in Sustainable Transformation (NEST), a nonprofit that develops vacant and blighted properties in the neighborhood, renovated the home as part of its "kinda tiny" house initiative, targeting historic homes under 1,000 square feet.

Pischl and his cat, Ace, moved into the house in December.

Their home is one of nine that will be part of the biennial Northside House Tour, set for Sunday, Sept. 30. Now in its 17th edition, this year's tour will also feature a church.

Tour goers who stop by Pischl's home will note that he made good on his goal of filling up the wall space. In the living room, he built striking shelves from galvanized pipe and reclaimed wood from Building Value that "probably came from the neighborhood," he said.

"In a small space, it's all about drawing the eye up," he said of his reasoning for building them from floor to ceiling.

The shelves are filled with everything from pottery Pischl made himself to items he's found on his weekend outings to antique malls and flea markets. The room's remaining walls are full of paintings and prints.

"I like finding things," he said. "None of these really have any particular meaning, other than I've found them."

"I like to buy things that have context to me," he said.

When pieces don't relate to his own life, he likes to think of how they once fit into someone else's. He imagines the former owner of the mantle clock taking the time to wind it. Thinks about his mom typing her college papers on the vintage typewriter. Wonders if the original recipient of the old sewing machine was thrilled because she'd no longer have to sew by hand.

"Every person has a story, and I like to think that all of the things I have have stories, too," he said. "I like to put them in places where they can tell their stories."

How does he make it all work so well together?

"You start with what you have, you make a change, and then you either keep the change or change it again," he said. "It's about experimenting, just having fun and enjoying it."

A friend who works in interior design recommended the peacock blue that highlights one wall for his color palette. Pischl kept the rest of the paint more neutral.

"The floor's really red, so you can play with a lot of color," he said.

Beyond the living room and the kitchen that opens into it, Pischl converted what would have been the second bedroom into a dining room for entertaining friends.

His own bedroom and a bathroom are upstairs. Otherwise, the home is mostly first-floor living. That's intentional: It was renovated with accessibility in mind, as were three other homes on this year's Northside House Tour. At Pischl's house, visitors will notice touches such as an outdoor ramp to access the house and a roll-in shower in the first-floor "gentlemen's room" (complete with portraits of "dapper gentlemen" and a tuxedo jacket).

Despite all the things Pischl loves about the house, the neighborhood might have been its biggest selling point. The Hebron, Kentucky native relocated from downtown Dayton, Ohio, for a job in digital product management in Kroger's Cincinnati office. He was drawn to Northside's diversity and the way its residents work together to make the neighborhood better, he said.

"It's a place where people are comfortable sharing ideas and learning and growing," he said. "It's full of people who really care about each other.

"Northside has something really special that I can't put my finger on," he added. "Tthat has to be the people."

Tickets: $15 in advance; $18 day of the tour. Available online and at select Northside locations.