Home Tour: This $1M makeover of an Indian Hill home reads like a Hollywood script

But you'll have to wait for the ending 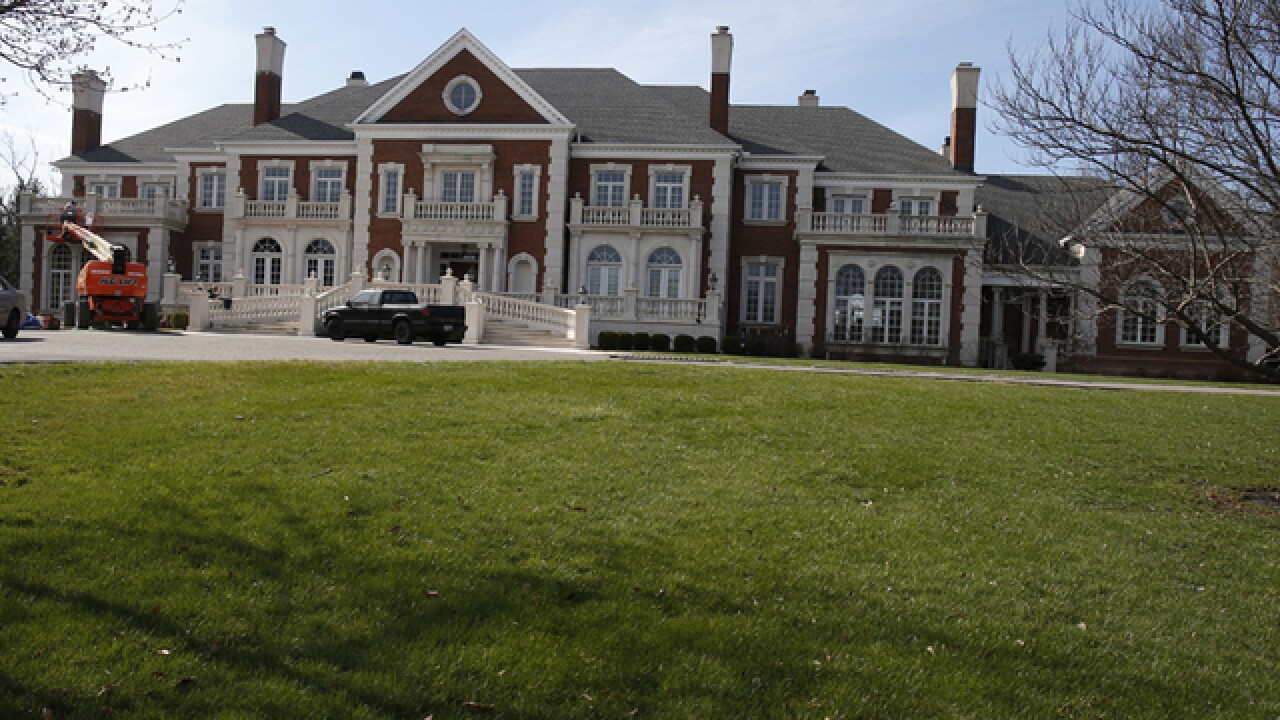 INDIAN HILL, Ohio -- Welcome to our first episode of "Home Tour: The Before."

By that we mean before perennial Best of Houzz interior design winner Doni Flanigan and his 20 "cream of the crop" workers complete a $1 million makeover of an 18,000-square-foot Indian Hill mansion in three months.

The flashy Flanigan -- son of a charismatic and artsy Indiana pastor, horseman, country western singer-songwriter and self-proclaimed "the guy in Bel Air for 20 years" -- is "rockin' every single room" and "spending L.A. kind of money" to create "the most spectacular display of wealth Cincinnati's ever seen."

Despite the presence of floor-to-ceiling scaffolding in the main rooms, rough surfaces and missing flooring in others, Flanigan's vision for the massive mansion was taking impressive shape when we visited during his fifth week on the job.

We will return to see the finished project around its May 20 deadline.

A local, anonymous entrepreneur purchased the 18-year-old European-style mansion in February for a reported $3.32 million and hired Flanigan to turn the outdated interior design and landscaping of what Flanigan calls "the fortress" into a haven for a family of six.

Flanigan immediately called in four carpenters, four masons -- he calls them "stoners" -- and 12 plaster and mural artists, many of them he employed during the 25 years he worked for millionaires in Los Angeles.

He signed up regional suppliers and craftsmen to fill in the blanks, including Mees Distributors of Northside, Take it for Granite of Withamsville, McClure Electric of Lawrenceburg, Nieman Plumbing of Forest Park, Bluegrass Custom Pools and Spas of Walton and Reading Rock and Hansen Scaffolding of West Chester.

During our visit, Flanigan's "orchestra" was in full symphony mode, and the maestro was manning the baton and his cellphone at a non-stop pace.

We ducked beneath scaffolding that straddled a $70,000 Schonbek chandelier and obscured the double staircase in the grand entry hall to get upstairs and find Flanigan. He was in the master bedroom, a humongous space that fills the east end of the two-story house. It features two walk-in closet/dressing rooms and a two-person shower -- all the dimensions of a good-sized bathroom -- and a raised tub with wrap-around decking nestled into a large, bay-windowed side room.

"The owner is not afraid to spend money. We've got $40,000 in tile going into the master bath," Flanigan said. "Kitchens and baths sell homes, so for the gentleman's sake, we're going to smack it out of the park."

A phone call later, the marble tile had arrived, and Flanigan had to dash down to move his Corvette -- his Ohio license plate reads "Doni 1" -- so the delivery truck could access the four-car garage. Within minutes, Flanigan's "stoners" were cutting it to shape in the garage workshop.

Flanigan's specialty is making once flat-painted walls look like glimmering stone. He learned his Venetian plaster skills from masters in the south of France and employs equally skilled artists to coat the walls in the main living areas with four layers of finely crushed, gray plaster. Silver leaf and stains also are part of the painstaking process that results in the desired polished-granite appearance.

Flanigan pointed out the hallway from the center of the first floor to the knotty-pine lodge room at the east end as an example of the effect. The walls -- which were a flat, light green five weeks ago -- reflect the little light coming in from the lodge, creating a lush glow.

"We want the stone plaster to flow through the main areas like in the castles of England, France and Italy," Flanigan said. "Everything will be museum-quality. Man, you look at the outside of this place, and it looks so authentic. I'm gonna try to make the inside look as good as the outside."

All of the home's six full bathrooms and three powder rooms will be remodeled, as will the kitchen. But, Flanigan emphasized, the house is not a gut job. No walls are being taken down, and he saves and reuses what he can, such as the chandeliers, lodge room bar, and kitchen cabinetry, which will be resurfaced and topped with new stone.

Flanigan said it is a blessing that the mansion's interior woodwork was created by a master and requires very little updating. That savings allowed him to spend more money on giving the house a completely new identity.

"I've had millionaire on my fingertips," said Flanigan, who said his long, blond hair is always topped by "my helmet," a Silver Spur Cattleman model made of Guatemalan palm by SunBody Hats of Houston. "I'm spending their money, but I have to spend it wisely."

Flanigan said he learned about art, vision, charisma and thrift from his father, the Indiana pastor who salvaged and refinished architectural pieces from farmhouses to decorate his own homes.

"Everybody'd come into our house and think we had money," he recalled. That's the impact he hopes to have on the Indian Hill mansion.

A former dancer at Disney World and a country singer with a presence on YouTube, Flanigan likens his work to being a showman, and he has fond recollections of singing gospel on tour with his father and parishioners of the First Christian Church while growing up in small-town Indiana and Illinois.

The $1 million makeover that's under way -- it includes exterior limestone and brick restoration as well -- will allow the homeowners to move in by late May. More changes will be made in a second phase after that, Flanigan said. In the end, all six bedrooms will have been refinished to some degree. The living room ceiling will feature a sweeping cloud-storm mural. There will be a new swimming pool off the back terrace -- excavation began this week --  and a homework room off the kitchen. A bowling lane or two and theater room will supplement the recreation room and wine cellar in the basement.

Flanigan's interior design is more than wall and floor finishes. He will have refurnished the house by May 20 with purchases made during a trip to his old haunting ground in Los Angeles.

For a 60-year-old man -- who started his business in Beverly Hills at age 37 by knocking on doors and announcing "I'm Doni Flanigan. Give me a room and I'll change your life" -- the Indian Hill project is one of the most gratifying because it affects "a really nice family" instead of an L.A. millionaire.

Yet he's still proud of the two-story library he created in a new Turkeyfoot Road mansion that garnered so much attention four years ago during the Northern Kentucky Home Builders' Cavalcade of Homes. The 1,000 business cards he handed out during the three-weekend show rooted his business in his wife's hometown -- they've lived in her childhood home in Western Hills since returning to the Midwest four years ago -- and he's been booked solid ever since.

The Indian Hill mansion is one of four jobs Flanigan is working on, but he said he's confident he'll beat the odds some say aren't in his favor.

Stay tuned for "Home Tour: The After."