Home Tour: This 1935 Clifton standout was the first of its kind in Cincinnati

It was even the site of a Folgers commercial 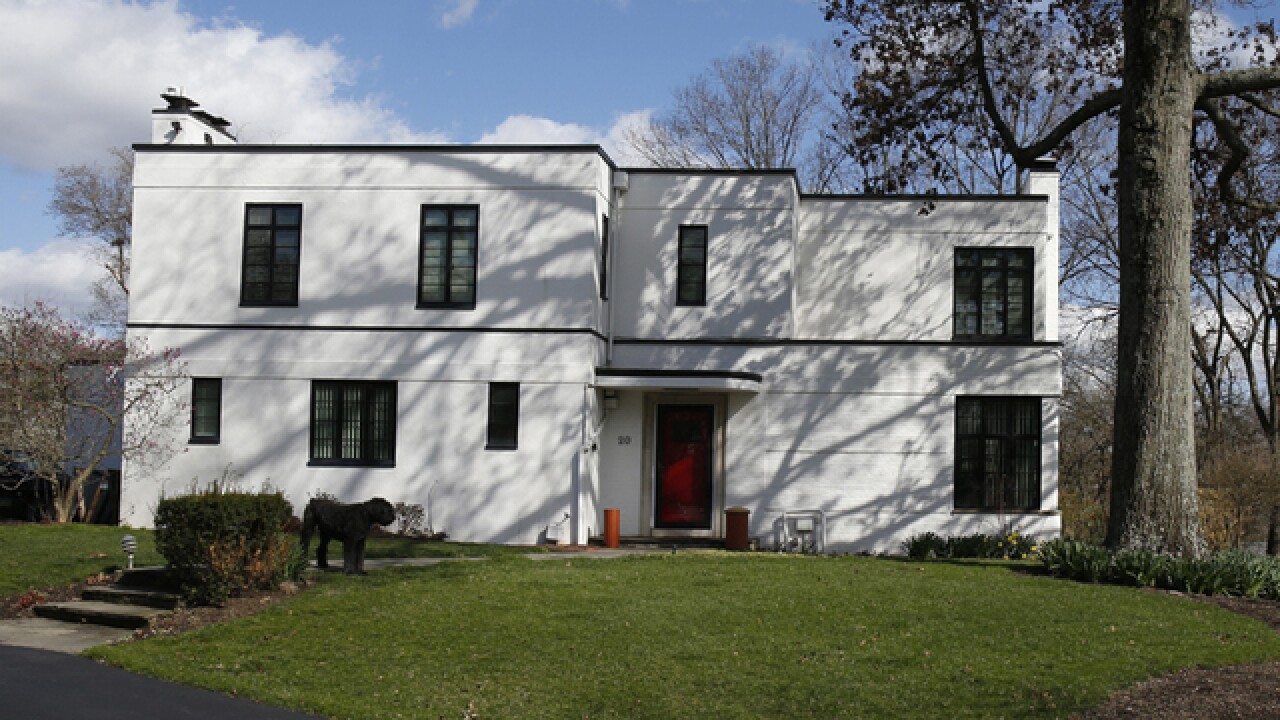 CINCINNATI -- Jay and Janet Chatterjee's 1935 Clifton home is a standout in more ways than one. Moderately sized, boxy and bright white, it literally stands out among its larger, neighboring Tudor and traditional homes.

Now, a month after earning a coveted place on the National Register of Historic Places, it stands out among homes across the nation as one of the finest early Modernist residences.

The house is more than just early. It was the first modern residence in Cincinnati, a fact that Chatterjee, as dean of the University of Cincinnati's College of Design, Architecture, Art and Planning from 1981 to 2001, discovered after he and Janet bought it in 1983.

"All the research by the people in my department shows this was the first modern home in Cincinnati," Jay said, while straddling a living room ottoman that is part of his four-piece set called Barcelona, designed by Mies van der Rohe in 1929.

Living in the house for 34 years has been an honor for the Chatterjees, who met in Cambridge, Massachusetts, married in 1968 and have two adult children.

Folgers once shot a coffee commercial through an upstairs window in the house, and the house almost got into the 1994 film "Milk Money," which starred Melanie Griffith and Ed Harris and was directed by Richard Benjamin.

Janet Chatterjee recalled the day Benjamin's wife, actress Paula Prentiss, came to their front door and asked if they could scout the house.

"But our boy wouldn't clean his room," Janet said, "and that's the one they wanted in the movie."

It has been the perfect home for a couple whose collection of furniture was made by some of the 20th century's most famous industrial designers, such as van der Rohe, UC graduate Michael Graves, and UC's Vontz Center architect Frank Gehry, as well as George Nelson, Charles and Ray Eames, Harry Bertoia and Marcel Breuer.

Oddly, the house was intended to be designed by Cincinnati architect G. Marshall Martin in the more neighborly Tudor Revival style. Martin had been hired by UC political science department head S. Dale Lowrie and his artist-wife, Agnes Pottery Lowrie. The childless couple wanted a two-bedroom Tudor with a library for him and a studio for her.

Martin, however, had studied German Bauhaus architecture and was a fan of its spinoff: International Style. He was able to convince the Lowries to keep most of the Tudor floor plan but give the house a modern look and feel with a design that Glendale-based architectural history consultant Beth Sullebarger describes as "transitional," falling between residential Bauhaus and more-commercial International.

Black and white all over

The result is the starkly modern house Jay Chatterjee said he always wanted for his furniture and extensive collection of colorful artwork. Hanging on almost every white wall are pieces from his native India and numerous ones created by people he befriended through his work and worldwide travels.

I don't like colored walls," Jay said. "I like black and white. My wife says I'm color blind, but it's not true."

In addition to all the smooth, white walls, the Chatterjees' house features many large corner windows with black steel frames they had custom-made by Wassau Window of Wisconsin.

The house was a forest of honeysuckle on the outside and wet and windy on the inside when the Chatterjees took ownership.

"It literally was a jungle," Jay said. "You couldn't see anything out the windows because the honeysuckle took over everything all the way up to the house. The steel-case windows were bent, and there was cold wind whistling in."

The couple's gradual remodeling took care of those issues, and today they have a tastefully landscaped yard with an expansive hillside back patio that's accessible through three French doors in the dining room and one in the living room.

They have made other changes to the house, as well. They gutted and remodeled the kitchen in the mid 1980s, using the black-and-white color palette that dominates the home. They converted a closet to a cubby for their oven and stovetop, microwave oven, hanging pots and pull-out spice drawers. Shelves between the white kitchen cabinets and black granite countertops and perched above their four-seat table are lined with more than 50 jars of spices that Jay uses in his Indian cooking.

The Chatterjees also returned their butler's pantry to its 1935 state, removing solid cabinet doors and replacing them with original framed glass doors they found boxed up in the basement.

"Janet and I, we restored all these doors. I really like them, but actually restoring them was a lot of work," Jay said.

Having a door from the butler's pantry to the two-car-garage and a swinging door opposite that opens into the dining room has made entertaining logistically smooth for the Chatterjees. During his DAAP dean days, Jay said, they threw a lot of parties and appreciated the easy access to the house the pantry provided caterers as well as the French doors between the dining room and the back patio.

Sit-down affairs center on a 10-foot-long table and matching credenza Jay designed for the room. He chose to make it out of swirling burl olive wood and hired craftsmen at a furniture company in High Point, North Carolina, to make it.

Up to 12 vintage, caned chairs by designer Breuer can fit around the unique table, and two bent, blonde plywood chairs called Cross Check designed by Gehry front the wall of the French doors. The dining room also features a long, floating marble shelf -- one of three the Chatterjees added in strategic places on the first floor of their home -- that runs nearly the length of the dining room's interior wall, giving them extra service space during meals.

A wide opening connects the dining room to the living room, where a black, white and chrome scheme is carried out by the fireplace, five vintage lounge chairs -- one by the Eameses, and two each by Le Corbusier and van der Rohe -- and broad shelving units by Nelson. Area rugs and artwork add splashes of color as do a reddish-orange upholstered Bertoia Bird Chair and a deep blue upholstered three-person sofa Jay designed out of rosewood.

There are two other rooms on the first floor: a maid's room with full, modern bathroom and the entry hall. Observant guests might notice that the pattern in the leaded-glass front-door window is picked up by the hall's etched-glass light fixture. Certainly they'll notice the sharp modern staircase made of chrome and brass.

Up the stairs branching off a central hallway are Jay's office, a library with three seven-level bookshelves, a guest room with a full bathroom that has a second door to the hall, and the master suite. Everything but the reproduction sink is original in the suite's bathroom.

Will they stay or go?

Janet, who makes Martin-style guitars in her basement studio, said she can't fathom leaving the house for a condominium lifestyle. Her customized space also holds a lot of memories, like the day Folgers shot the commercial.

"There was a tornado that day and I went down in the basement with all the kids. We had to wait it out down there for an hour," she recalled.

The Chatterjees' 1935 house is one of more than a dozen in Clifton that are on the National Register of Historic Places and the second one on Rawson Woods Circle to make the list. The other -- The Cedric G. and Patricia Neils Boulter House -- was designed by Frank Lloyd Wright and built in 1956. It made the register in 1999.

Making the national register will help preserve the historic significance of structures for years and potentially provide owners a federal tax credit. But for the Chatterjees, it's "largely honorary," said Sullebarger, the Glendale-based consultant who drafted the NRHP nomination report required by the National Park Service, which governs the register.