Home Tour: This 1815 Madeira home's kitchen has 500K Pinterest views; the rest is pretty cool, too 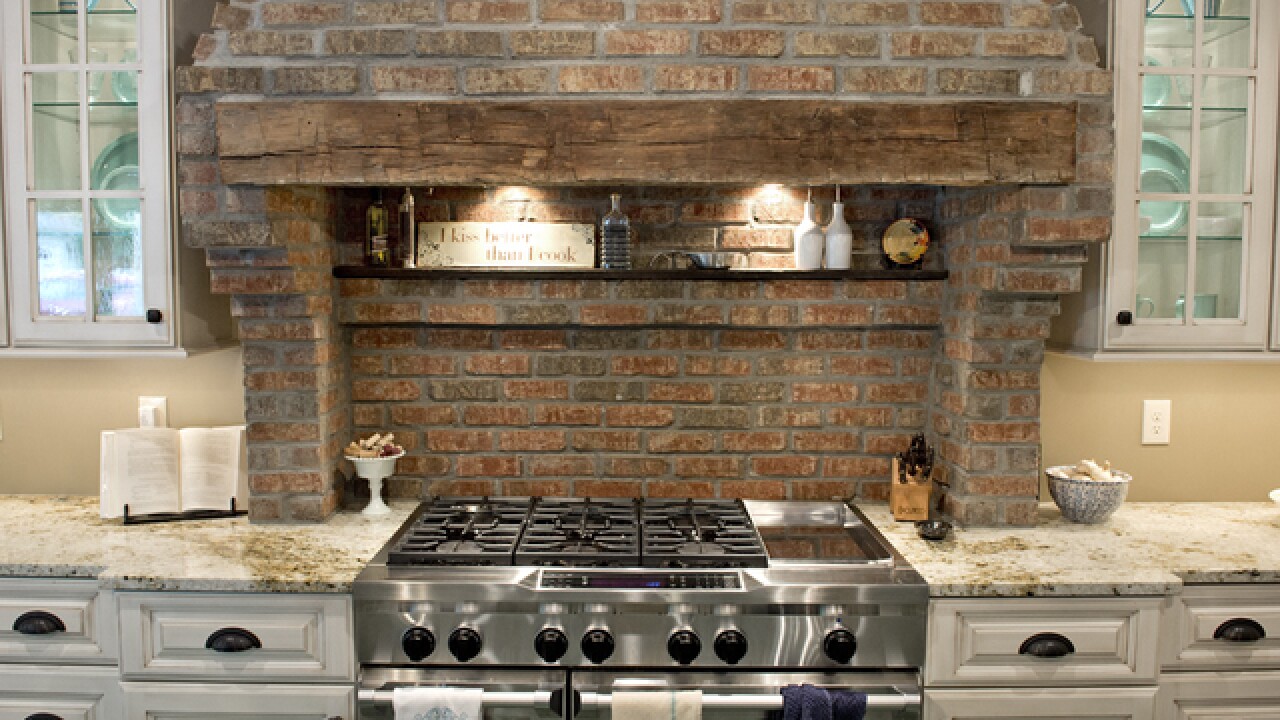 Copyright 2017 Scripps Media, Inc. All rights reserved. This material may not be published, broadcast, rewritten, or redistributed.
David Sorcher | WCPO contributor
<p>Dominic Rizzo and Elizabeth Brown's 1815 Madeira home features original, rough-hewn beams left in place in the old part of the house and reused in their recent addition. Its furnishings are a blend of old Asian, European and American pieces and modern ones from shops such as Arhaus and Restoration Hardware.</p>

The "point of Pinterest" in the Madeira home of Blue Ash podiatrists Dominic Rizzo and Elizabeth Brown has to be their new kitchen.

The 3-year-old room, which is part of an ambitious addition that doubled the size of the married couple's 1815 house to more than 5,000 square feet, has attracted more than 500,000 views on the popular social-media lifestyle site.

For sure the kitchen is a point of pride. But, Rizzo said, the handsome space is more a tribute to the teamwork he and Brown established with project manager Aaron Hoober of Justin Doyle Homes and interior designer Kimberly Fox.

"We knew it was going to be a journey," said Rizzo, who bought the historical house 17 years ago in part to show he was "a big boy."

Modern and classic materials, such as 200-year-old beams reclaimed from an upstairs bedroom, blend seamlessly in the Pinterest-popular design that flows throughout the ground level of the house and past a set of French doors to the back patio, where a 19th-century brick water well serves as an elevated fire pit.

Old barn wood and rough, ax-hewn beams from the original house, which pioneer farmer John Todd built from his own felled trees and bricks made on the property, pop up inside and outside the added space. The 2014 remodel required demolition of a 1920s addition and includes a side entry hall, a butler's pantry, the kitchen that flows into the breakfast nook and the family room, an office, a powder room on the first floor and a house-wide master bedroom suite with a large balcony on the second floor.

It all started, the couple said, when they were enjoying a little wine while seated in the house's original kitchen (now the living room). They had often wondered what was hidden above what appeared to be a drop ceiling in the room, Rizzo said.

"And then all of a sudden (Brown) brings out this bat stick and literally punches a hole in the ceiling, and we saw the original beams were still there," he said. They fell in love with the rustic look and used it as inspiration for the remodel that resulted.

Dominic Rizzo's family and history are important to him. The Oak Hills High School and Thomas More College graduate's interest in old things developed into a collecting bug when he was young. Along with it came an interest in historical homes.

While driving toward Indian Hill back when he was 28, Rizzo spotted a "For Sale" sign just off the road. Two trees -- a large magnolia and a variegated beech -- blocked his view of the house, but he got enough of a glimpse to be intrigued. It turned out, he said, that the house's owners were in the midst of a remodel.

Rizzo bought the house, fixed it up and took occupancy in 2002. His furnishings, which he said make up about 80 percent of what's in the house today, made the place a great single man's home until he met and married Brown. They welcomed a third resident, son Luca Salvatore Rizzo, 11 months ago.

Brown, who grew up outside Louisville and is an Indiana University graduate, is visibly proud of the home she and Rizzo have created for their son in the old Madeira farmhouse.

"I feel like we have something different, something unique that's unlike anything else," Brown said. "Learning about the house's history makes it so much more meaningful."

Speaking of history: The house came with a book compiled by Frederick and Ruth Becker, who lived in it for 60 years, Rizzo said. The hard-bound book includes documents and stories about the Todds, who reportedly were related to Abraham Lincoln's wife, Mary Todd.

"The story has gone from 'Lincoln was here' to 'It was one of his houses,' " joked Rizzo, who said he has no proof there is a presidential tie to his 4-bedroom, 4 1/2-bathroom home.

The kitchen, which features a stovetop vent that resembles a brick pizza oven, might be the showcase room, but at least three others deserve description.

The original ground level of the home is now one big room floored with new hand-scraped, engineered hickory and divided -- not by walls but by added beams -- into three areas. The first area guests experience is the living room. The original firebox holds vented-gas logs and is topped by a rustic slab of salvaged barn wood. The room's original beams divide the wood ceiling and support one of several crystal chandeliers scattered throughout the house.

In the middle is what Rizzo calls a "transition space." In actuality, it's a bar room that spans the depth of the original house. For the front side, Rizzo and Doyle Homes designed glass shelving and wood cabinets in a cubby that's backed by exposed brick with remnants of original plaster. Across the room and also in a new cubby are lower cabinets for liquor and wine racks crafted of salvaged wood by Brandon Schlechtinger of Ohio Valley Rustics.

The bar area transitions to the dining room where the Rizzos can sit up to 14 people. Its signature pieces are a gilded mirror that hangs on a closed-in fireplace and four lights -- iron circles with candle-style bulbs -- that hover over the table.

A butler's pantry with a sliding barn door designed and made by Rizzo links the dining room and kitchen.

A second unique space in the house is Luca's room on the second floor. It's vaulted with an exposed chimney and beams at ceiling height and at the apex. Half the beams, Rizzo said, were removed and used in rooms such as the kitchen. Loft space above a next-door bathroom, which divides the two bedrooms on the front side of the original house, is empty for now.

Rizzo said that when Luca can climb a ladder safely, the loft will become his hangout. Hopefully, Rizzo said, the boy won't use the loft to swing on the beams.

"Him being a boy, we'll have to pull splinters out of his hands when he's older," Rizzo said.

A third special place, one that's not completely finished to Rizzo and Brown's standards, is their master suite. It's on the back side of the house and features a walk-around, tile-sheathed shower, separate vanities and a free-standing oval soaking tub Brown calls her "sanctuary."

Next door is a walk-in closet, and outside French doors like those off the family room directly below is the couple's iron-railed, gently-arched balcony that mirrors the patio beneath it.

Along with the balcony, the back patio is Rizzo and Brown's go-to place for evening relaxation. The stamped-concrete space features a gas grill, a table for eight, a ventless fireplace, a flat-screen television and built-in stereo speakers.

"We're out here almost every night having a drink, and it's great for parties and events," Rizzo said.