Home Tour: They're leaving Clifton, but they're taking fond memories of this mid-century modern

Its vintage state made it a quick sell 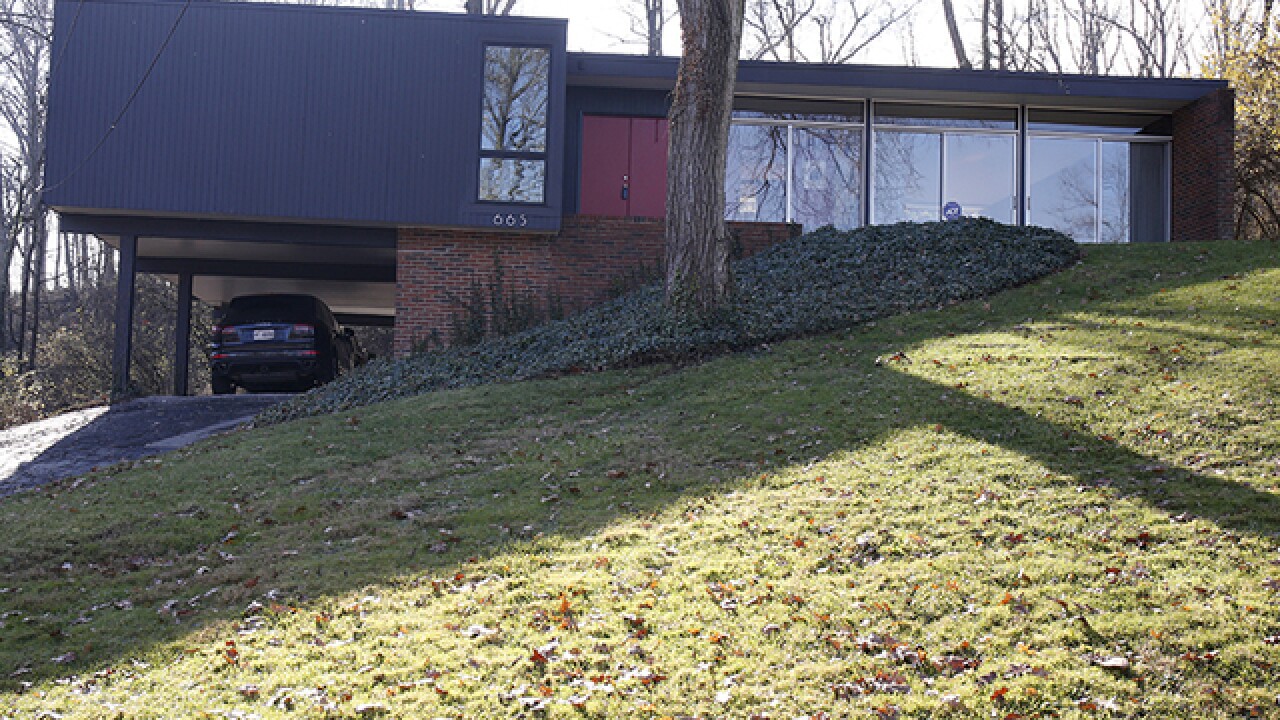 Copyright 2017 Scripps Media, Inc. All rights reserved. This material may not be published, broadcast, rewritten, or redistributed.
Gary Landers | WCPO contributor
<p>The front elevation of the Clifton home of Jenny and Adam Noderer.</p>

CINCINNATI -- Upstate New Yorker Adam Noderer and his West Side Cincinnati wife, Jenny, will hold Clifton close to their hearts when they follow his job with Porsche Cars North America to Chicago in early 2018. It's where they met, where they married and where they and their 2-year-old daughter, Vivian, and their dog, Brutus, have shared a one-of-a-kind, mid-century modern home during their two years of marriage.

The move has happened somewhat suddenly. Adam, who is a regional sales manager and graduate of Appalachian State University, and Jenny, who has an associate's degree in marketing from Cincinnati State, received seven quick offers when they put their 1,986-square-foot, 3-bedroom, 2-bathroom home up for sale in mid-fall.

Through Adam's go-to realtor, Susan Rissover, the couple negotiated a cash sale for thousands of dollars more than their $350,000 asking price. A buyer from San Francisco bid on the house despite not having seen it in person. A Face Time tour was all it took.

"He didn't come see it until it was under contract last week," Adam said. "That's kind of a cool story. Like me, he saw it and put a full offer on it immediately."

Adam, with mid-century specialist Rissover as his agent, bought the 1963-designed house in early 2009 after having lived for a short time in a much larger modern home she helped him buy and sell in Amberley Village.

Adam was looking for a house in Oakley and Hyde Park. Then his agent described to him one on Berkshire Lane off Ludlow Avenue that had just come onto the market.

"I was, like, 'I want to see this house,' " he said. Even though it needed a thorough cleaning and aesthetic makeover, the house's original state won over this fan of mid-century modern homes.

"The more I lived with it, the more I loved that it is vintage," Adam said.

Adam met Jenny at a restaurant in the Clifton Gaslight District around Halloween of 2011, and they married in Mount Storm Park in 2015. Both adore the Berkshire Lane house for its open feel, natural light, views, frequent wildlife visits and community spirit.

"This street in Clifton can't be beat," Adam said. "It's on the hill and kind of fortified. The hill prevents a lot of traffic from coming up here, and the neighbors are fantastic. That's what we'll miss the most."

Amherst College graduate David Heuer designed the house in April 1963, possibly as his master's of architecture project at the University of Cincinnati. By 1967, Heuer had sold the house -- a 1966 newspaper advertisement listed it at $43,000 -- and left Cincinnati to join an architecture firm in New York. UC history professor Herbert Curry was the house's second owner, and Noderer bought the house from Curry's estate.

"Dr. Curry kept it original, probably to a fault," Adam said. "It had this dirty beige carpet with a dry, rotten pad under it in the living room and original, crazy wallpaper everywhere."

However, Adam was glad Curry kept the house in original shape and could see its great potential. Immediately, he began making it look youthful again, hiring professional help as needed.

"Give me a sledgehammer and a crowbar, and I can do it," he said. "I can paint and take things apart, but not so much put them back together. "

The house's tall windows and curtains in the living and dining rooms, the solid teak cabinets with piano hinges and stainless-steel pulls, turquoise push-button electric range, laminate countertops and domed skylight in the kitchen, the colorful tile and Formica-topped vanities in the bathrooms, the parquet floor in the master bedroom, and the yellow and gray speckled linoleum floor in the laundry room all remain as they were in the '60s.

"It's cool to me that it's from the 1960s and it's still kicking; it still presents itself well," Adam said.

The house is situated a dozen or so feet above Berkshire Lane and faces north, providing a sliver view of Clifton's Mount Storm Park temple, where the Noderers married.

The double front door is centered between sidelights and a transom. To its left is a wing with an office, three bedrooms and two full bathrooms. Straight ahead is the kitchen and dining room. The sunken, 28-foot by 17-foot carpeted living room is to the right. There is no garage, just a covered carport beneath the bedrooms and a basement workshop and storage room.

Condition issues convinced Adam to replace all the flooring in the central rooms: Brazilian cherry replaced oak parquet in the dining room; cork replaced linoleum in the kitchen; and flame granite set in a Versailles pattern now covers the entry hall.

Adam said a lot of people would have done more, but he just couldn't. He chose, for example, to restore and not to replace the kitchen countertops.

"I toyed with putting quartz on the countertops and pulling this (pass-through) shelf out and putting a couple barstools at it ... but that's not how it was made," Adam said.

Other than swapping out the old carpet, he left the large living room intact. It is situated two steps down floating oak treads in the entry hall and dining room. Dominating the room is a 28-foot by 9-foot brick wall with fireplace and floating hearth. Both walls of windows -- which still have their '60s curtains -- are fronted by built-in benches that double as HVAC ducts.

The Noderers use the space as a family room when Vivian is up and playing. They move her toys out of the way when it's time to entertain.

"This house checks all our boxes," Adam said. "It has this big, open living room and no family room, which I think is an antiquated concept."

Jenny agreed, saying that the naturally lighted living room warms what has been a great first home for the young family.

Adam and Jenny are confident they will find a great home in their chosen destination of Oak Park, Illinois, but it won't overshadow Clifton.

"I've loved Clifton ever since I was a little kid at Walnut," said Jenny, who grew up in Cheviot. "I'll always remember hopping on a bus with friends and coming over here after school and hanging out."