Home Tour: These twin Pendleton row houses look identical -- until you step inside

See what two couples did with their interiors 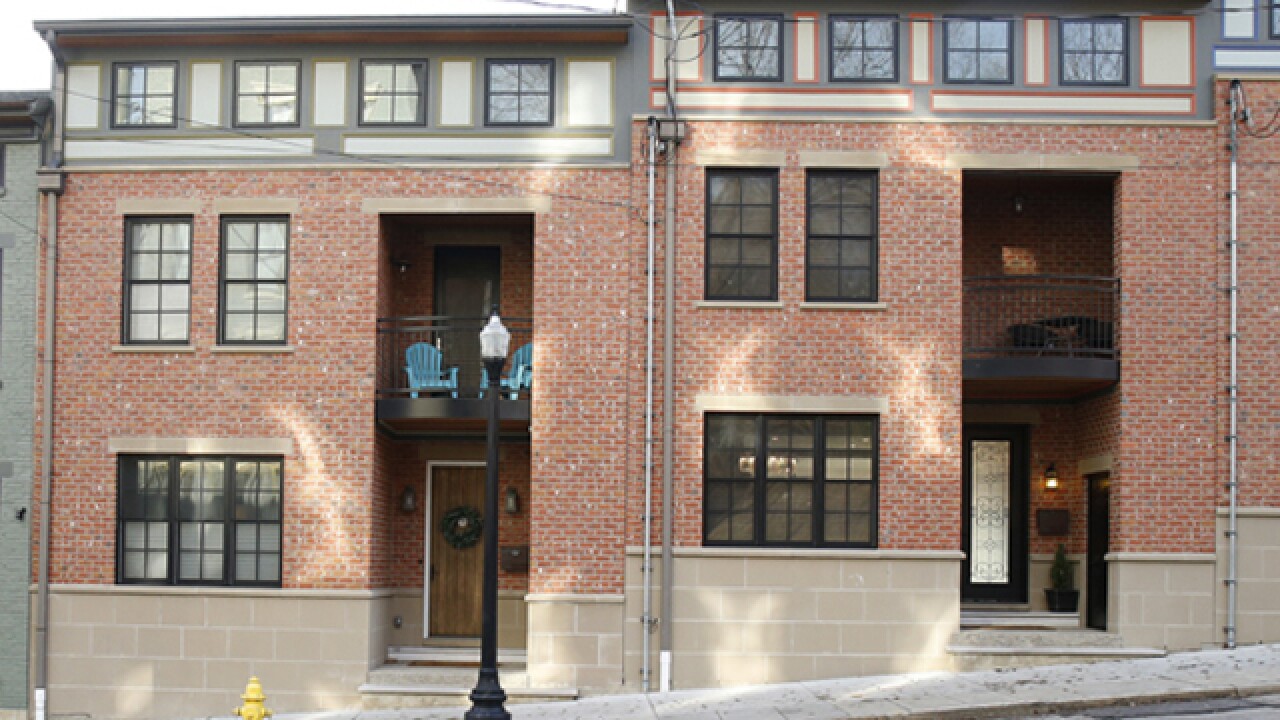 Copyright 2018 Scripps Media, Inc. All rights reserved. This material may not be published, broadcast, rewritten, or redistributed.
Gary Landers | WCPO contributor
<p>Twin Pendleton homes, owned by Jack and Anna Weston, left, and Cydney Rabe and Mike Forte, right, are identical only on the outside.</p>

Built along with two others by Chris Lacey on either side of an 1800s Italianate where the street ends at the south side of Liberty Street, the three-story homes were blank slates when their owners bought into Lacey's project in the fall of 2014.

The homes look the same from the street and rear alley, but are completely different inside. That's because Lacey created solid shells and let the couples make interior design choices that meet their needs. Both went with open first-floor plans, but where they placed their staircases makes them wildly different.

The Westons placed their floating staircase in the middle of the house and vaulted the living room ceiling, losing what could have been a fifth bedroom in the process. Longtime Over-the-Rhine resident Rabe and her boyfriend, Forte, positioned their sawtooth staircase on the north wall of their house in order to have one open room on the ground level and enough space upstairs for five bedrooms.

Lacey said he tried to remain as flexible as possible with the first-time home planners.

"It was great to see them start the process with one idea and watch the lights go on in their heads. It was all good," said Lacey, who has rehabilitated seven old homes and built 15 new ones within a three-square-block pocket of Pendleton.

Here are the two couples' stories:

Although a suburban boy at heart, Jack has embraced urban living in prototypical style. He rides a Genuine Stella scooter around town, using their car only on days he golfs at Maketewah Country Club in Bond Hill.

He and Anna had been married a short while and were living in an OTR home owned by his parents in 2014 when a friend turned them on to a house on Spring Street, one block west of Pendleton. They were outbid, but the Westons met Lacey in the process and bought into his ground-up project.

"We designed it to grow a family here," said Weston, seated in his vaulted living room while his 6-month-old son, Bobby, napped upstairs.

To that point, they designed a second floor that places their master-bedroom suite right next to the laundry room and nursery suite -- a perfect setup for rearing a child. When baby No. 2 comes along, Jack said, Bobby will move into one of two third-floor bedrooms that are adjacent to a large family room. As their children grow and move away, this rotation will free up one room and eventually two more for guests.

It's a long-term plan that will allow the couple to live the city lifestyle they enjoy so much.

Not only do the Westons have an open floor plan, a suburban-style master-bedroom suite with built-in coffee maker, a small east-facing deck and two large west-facing decks and more than 2,500 square feet of living space, their 3 1/2-bathroom home is LEED Gold certified, which qualifies them for a 15-year tax abatement.

For now, they spend most of their time on the first floor, which includes a vaulted living room with a stone fireplace and a small dining room beside an all-modern kitchen that's dominated by a 14-foot-long island and wall of gray cabinets with a bar space at the end. The floors are bamboo, and large, super-efficient glass doors swing open to a 25-by-12-foot deck over the alley-entry garage.

The switch-back staircase in the middle of the house is its signature architectural detail. It is open and rises to the third floor and is made of iron and white oak. The design allowed for the living room ceiling to be vaulted and natural light to brighten the Westons' lives.

Another plus for the couple are the views from the third-floor deck, which is 300 square feet like the one on the first floor. From their lookout, the Westons can see several church steeples and the tops of the Macy's building, Carew Tower, Union Terminal and Music Hall.

"If we weren't living here, we'd be in Chicago or New York," Jack said. "This is as close as you can get to that and not be in a big city."

Cydney Rabe is expecting her first child in late March. The Cincinnati Country Day School and University of Tennessee hospitality graduate is co-owner of 12th Street Pilates. Her longtime boyfriend, Forte, works there as well, and could not make our home tour.

A client told them about Chris Lacey's Pendleton Street project "and we jumped on it right away," Rabe said. "We came over one day, met with Chris, and he took us to his house (in Pendleton, of course). He told us what he was going to do, and we signed a contract that week.

"He gave us the shell and let us pick things like changing the stairs orientation to create this open space," said Rabe, seated in the one room that is similar to the Westons': the dining space.

Rabe's house diverges from the Westons' design at the front door. Hers is leaded glass. Theirs is solid. Both couples can see out the back of their houses from the front door and went with massive kitchen islands, but beyond that, their designs are dissimilar.

Rabe and Forte's only cabinets are in their island, which are a matte Navy blue. All the walls are white and awaiting artwork. Roughly hewn beams that span the open space were salvaged from an old barn in Harrison and purchased at High Street design studio a few blocks away on Reading Road.

Rabe said their style is black and white and minimalism-meets-rustic. In addition to the old beams, the couple bought beveled and frosted doors from Wooden Nickel on Central Parkway. They sanded and painted them black, then hung them barn-style on the second floor.

"We felt it was really important to incorporate some history into the house," Rabe said.

Rustic but trendy is a live-edge, walnut countertop for their third-floor bathroom's vanity. Atop it sits a single circular sink made of white porcelain. Another one of the home's three bathrooms features an old-school, double-spout, porcelain sink that hangs on the wall.

The couple uses the vaulted third-floor family room for watching television and listening to music. One of their few pieces of art -- a large montage of album covers by musicians ranging from Michael Jackson to Willie Nelson -- adds color to the room as do the light oak floors and door frames.

Life will change for Rabe and Forte when they have their child, but always there will be plenty of space in their 3,100-square-foot home for her and their Doberman Pinscher, Bella.

And there's a quiet cul-de-sac outside the front doors of these fraternal twin homes, where perhaps their children will play and grow up together.