Home Tour: Home was a palace for 'King' 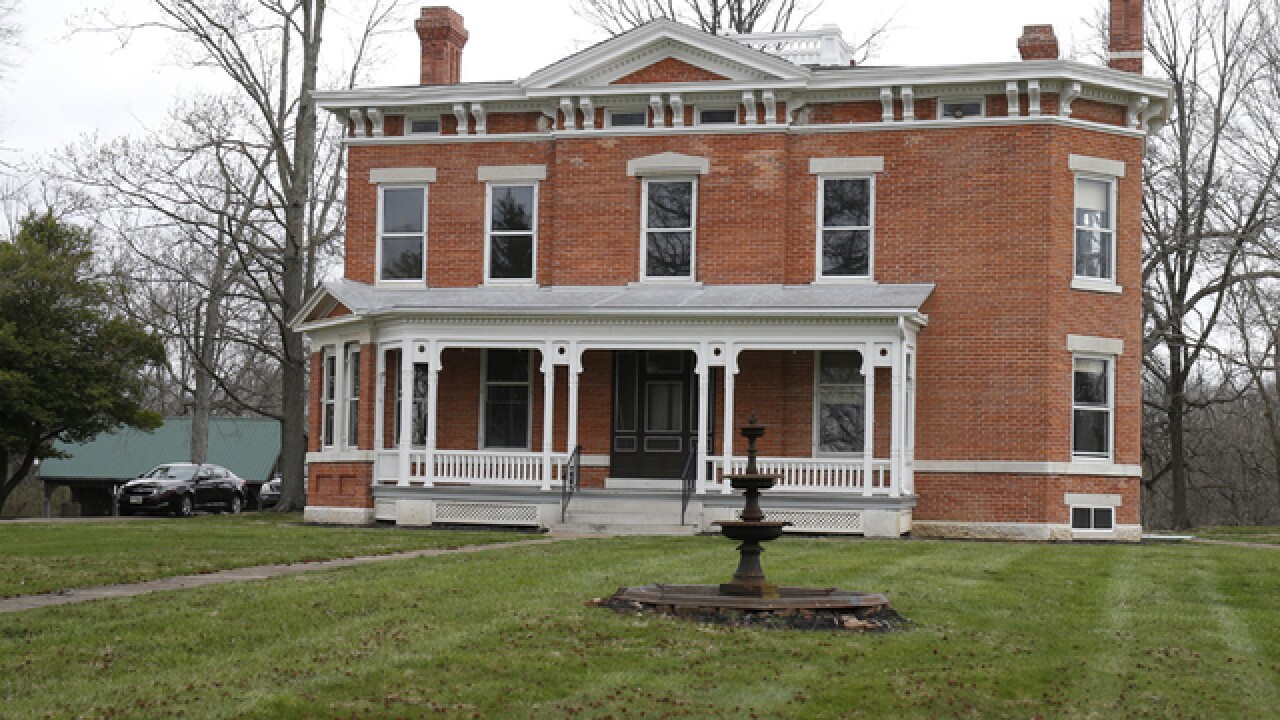 DEERFIELD TOWNSHIP, Ohio -- Matt Redder plans to live like the Kings -- three generations of them whose last name graces the region’s largest amusement park, Kings Island, as well as a community, Kings Mills, that was built by their patriarch, empire maker Ahimaaz King (1839-1909).

Maineville resident Redder and his wife, Terrie, are on the brink of buying one of the most historic buildings in Warren County, the 4,600-square-foot brick and limestone King Mansion. Since 1885, the late Italianate-style house has reigned supreme on a bluff a rifle shot or two away from where King ruled over his gunpowder and cartridge manufacturing plants on the Little Miami River.

The six-bedroom, four-bathroom home and its 6,000-square-foot carriage house has been owned since 2002 by Deerfield Township, which over the course of a decade restored its exterior while considering whether to turn it into an events center and museum or sell it.

“My wife and I both appreciate historical property,” said Redder, who grew up around stately homes in Pleasant Ridge. “We’d come out here and drive by the powder factory and pass the house. It’s very special and unique. When we saw that it came up for sale, we were surprised and replied quickly.”

Now they’re but a formality or two away from taking ownership of the King Mansion and its 1.79 acres of park-like land. Will they perhaps convert it to a bed and breakfast inn?

“We’re not ruling it out, but it’s not part of our plan,” Redder said. “We want to maintain it and honor the memory of King and its heritage.”

Buggies and Other Relics

To that, Redder said, he dreams of restoring one of the two antique buggies in the carriage house, and parking it on the street in front of the mansion, where the Kings High School homecoming king and queen will board it and ride to the annual parade.

Over the years, he said, high school students have had their graduation photos taken at the mansion, and he wants that tradition to continue.

“We want to make it available for township functions so it is part of the community. And we plan to have a big coming-out party.”

To be sure, the Redders have restorative work to do, but the man who wrote on his LinkedIn page that he “can fix anything” appears to be undaunted by the home’s outdated kitchen and abundant wallpaper. Matt Redder, a machine tool salesman whose career spans more than three decades with three companies, knows from reading Deerfield Township’s 2008 “Historic Structure Report” on the house that was compiled by Sullebarger Associates that it is structurally sound and in amazingly good shape for its age.

He said he is confidant he can bring the home and carriage house back to their original glory. There are many relics from the olden days stashed in the house -- furniture, light fixtures, wood trim, hardware, the library’s original slate mantel, two buggies and a sled, even horse bridles in the attic tack room and a fur coat in a cedar-lined closet -- for the Redders to cull, but can they furnish the mansion to the standards of a King? In a word, yes, said Matt.

“My wife is a garage sale pack rat, so if we don’t have it, we’ll get it, and she’ll have a great time doing it,” he said.

Months, perhaps years from now when the restoration is complete, Redder said they will have something that can’t be replicated.

“The details, the locks, the hinges, even the doors themselves and the door casings … If you were to have a house like this built, it would cost you $5 million new, and it wouldn’t be as good,” said the Lakota High School and Miami University graduate.

He said he draws some inspiration from the conversion project Schon/Bloomfield developers of Cincinnati have undertaken at the 100-year-old Peters Cartridge Co. plant the King family built and owned after the death of Ahimaaz in 1909 at age 70.

“I want to live in those condos when I get older. But while I have a fire in my belly, I want to tackle this property,” he said of the King Mansion.

History of The Home

History is everywhere on the grounds of the King estate, which is bordered on three sides by 65-acre Carter Park, named for owners who remodeled the house in the 1990s, Bobby and Betty Lou Carter. The windmill and two-story water tower that once stood on the mansion’s east side is gone, but passersby on King Avenue easily can get a glimpse into the property’s past.

Two weathered stone hitching posts with their original iron rings flank the walkway that leads from the street to the front door. On the lawn to the right of the path is a triple-tiered, hexagonal water fountain made of iron that the township’s report says shows in photographs dating to the 1890s when the estate was known as “Fountain Square.”

The sturdy brick home is two stories high with a broad, covered front porch. Italianate brackets support a hip roof on which there is a centered pediment and an 8-by-16-foot widow’s walk. Each 6-foot-tall sash window -- some are grouped in bays -- is topped with a sandstone lintel. Several original shutters are stored in the carriage house.

The front door, protected by a screen dating to 1910, features original stained glass sidelights and a transom. Their design reflects the desire people in the Aesthetic Era had to bring the outdoors in via images of plants and animals.

Guests enter a wide, central hall. Ahead and to the left is a grand pine staircase with a walnut newel post that features ball and starburst design elements. The grand parlor -- two rooms divided by a 15-foot-wide, wood-paneled opening -- to the right features an inlaid oak floor that was installed on top of the original pine boards about 100 years ago as part of a remodel completed by one of Ahimaaz King’s 10 children, Robert.

The men’s parlor also has one of the house’s eight original coal-burning fireplaces, all made of marbleized slate decorated to reflect the function of the rooms. The mantel in the ladies’ parlor on the other side of the hall, for example, features a carved and painted geometrical design that’s feminine in comparison to the other mantels.

Eight-foot-high pocket doors made of pine -- which was more commonly used in the 1880s to trim out the interior of country homes than it was in homes to come -- separate the ladies' room from the library. In the center of the house is the formal dining room and one of just a few vintage light fixtures remaining: a Tiffany-style, bowl-shaped chandelier with six milk-glass shades. The room has four doors, one of which leads to a solarium likely enclosed during the Great Depression.

Remodeled in The ‘90s

Moving further toward the back of the house, guests come upon the part of the house the Carters reconfigured in the 1990s. They linked what was a separate kitchen building in the backyard with a new breezeway into the main house. The old kitchen became a spa bathroom. What might have been a food preparation room -- there is a stairwell behind a door that leads up to servants’ quarters at the back of the second level -- became a galley kitchen with a door to the side yard.

Like the walls in the mansion’s main first-floor rooms, the stairwell features wainscoting made of a washable, tooled, leather-like material called lincrusta that was invented in the 1870s. Its excellent condition attests to the water-tightness of the walls, which actually are two walls surrounding an air pocket.

Three bedrooms for family members -- including a master that features a half-bathroom, inlaid floor and view of the front yard -- link to a wide hall, as does the house’s only original bathroom. It features a standalone, claw-foot tub and the original pinkish gray marble floor and wainscoting.

A curious find lurks in an unusually large closet off the hall: an open iron safe made by Hall’s Safe & Lock Company of Cincinnati in 1867. A hand-made sign hanging from it by a string reads: “No Money In This Safe.”

The carriage house features a striking front overhang with sections of grapevine gingerbread surrounding the letters “A KING.”

Made of brick and built into the bank of a slope, the carriage house had three active levels back in the Kings’ days. A pulley hoisted buggies and hay up to a second floor barn door. The first level featured a large, wide-wood planked area for working on equipment and stalls for up to six horses, which were fed through three chutes that come down from the hayloft. The lower level, which is bridged by a plank wide enough for a buggy, was accessed from the back and used as a milking station, according to the structure report by Sullebarger Associates.

“We’re going to bring the carriage house back to its glory … but it takes time,” Redder said.

They Called Him King

In the bible, Ahimaaz was the son of Zadok, a high priest of King Solomon. Given that Kings were devout Baptists, it is probable that’s where the Powder King got his first name, which means “My Brother is Counselor” in Hebrew. What did his family call him? Ahi? Aazy? Joel Smiddy, who has handled the sale of the King estate as director of Deerfield Township’s parks and recreation department, had this to say about that: “I think they pretty much called him King.”

King, a native of Connecticut who lost his father at age 10 and bet his future on Ohio by moving there at 18, entered the gunpowder business through his uncle, Joseph King, who bought up large parcels of land in southern Warren County. Those included acreage purchased from the owners of the Golden Lamb restaurant, which has been in business in Lebanon since 1803.

King Powder made the first semi-smokeless gunpowder and was a major competitor of one of the world’s largest chemical companies, DuPont, which started as a gunpowder maker in 1802.

Robert A. King had Cincinnati’s famous architectural firm, Hannaford & Sons, draft plans in August 1917 to add a sleeping room and sunroom off the back of the house. They were never built.

Ahimaaz King died at age 70 at his family’s winter home in St. Augustine, Fla. His three sons ran the company after that.