Home Tour: The elephants are gone, but Terrace Park's Robinson Circus House still reflects its past 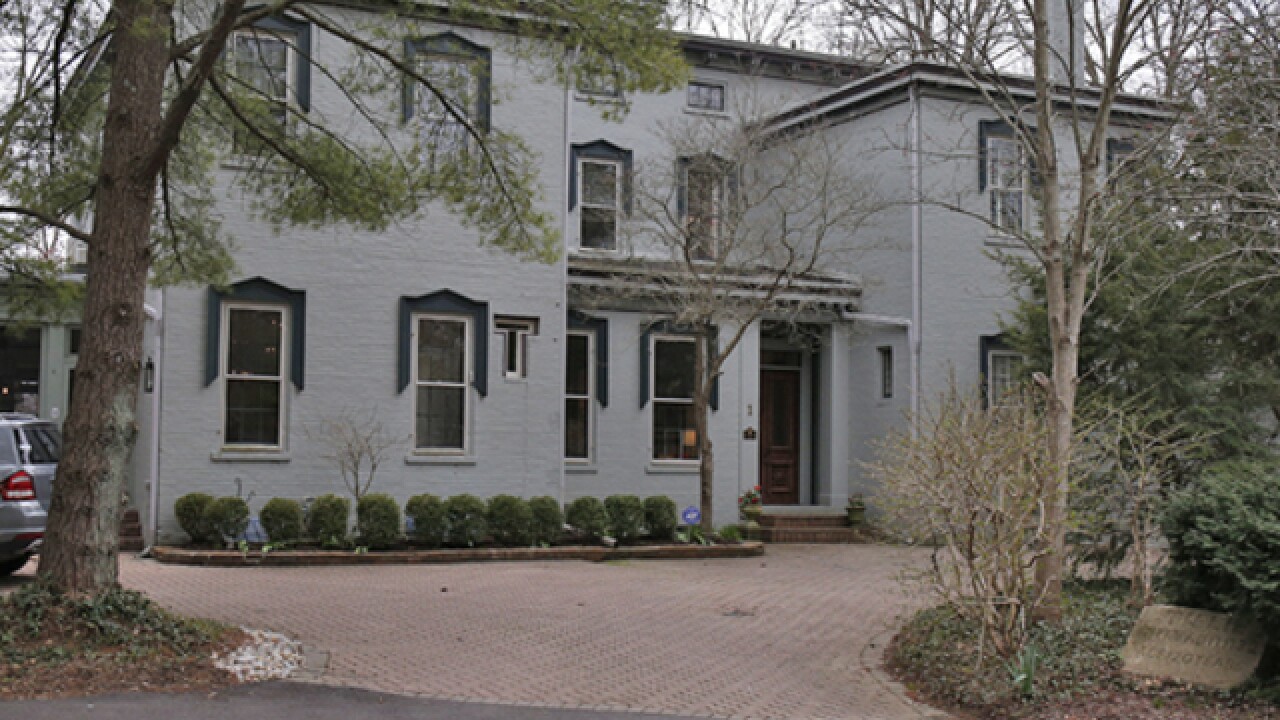 Copyright 2018 Scripps Media, Inc. All rights reserved. This material may not be published, broadcast, rewritten, or redistributed.
Gary Landers | WCPO contributor
<p>The gravestone of Tillie the elephant, bottom right, sits at the entrance to the Terrace Park home of Becca and Doug Worple.</p>

TERRACE PARK, Ohio -- Looking out the towering, arched window of the Italianate mansion to the Little Miami River valley below, you can almost see Tillie and the other John Robinson Circus elephants putting on a show in the "Elephant Hole" as the train whistles down the nearby tracks.

Like the circus, the train tracks and the outbuildings are gone now, the tracks replaced by a walking and biking path, the buildings by regular homes.

But the grand Terrace Park manor, known as the Robinson Circus House, still stands on the hilltop.

It almost didn't happen that way. In the 1960s, the house was in disrepair and a developer came close to tearing it down, according to Sibcy Cline realtor Steven Early.

Early has the home listed for sale at $1.189 million and has done extensive research on its history, scouring old newspapers and the Terrace Park Historical Society's files for information.

And what a history it is.

T.R. Biggs built the home on his family's farm in 1855. During the Civil War, he made a fortune selling beef to Union Army troops at nearby Camp Dennison. Some of that money went toward enlarging the house.

John F. Robinson, whose circus was famous at the time, bought the home after Biggs' death in 1870. Early credits the first Robinson to own the home -- it stayed in the family for three generations -- with transforming it through additions such as marble fireplace surrounds from Europe and wrought-iron porch railings from New Orleans (though the latter have since been removed).

"Robinson was really influenced by the antebellum homes he saw when the circus went through New Orleans," Early said. "It was much more like an ornate house that you'd see in the city than out here, which was really the country."

From spring through fall, the family's circus traveled to 15 states, filling as many as 35 train cars, according to WCPO archives. In winter, the family brought the animals to their Terrace Park estate. The nearby train tracks made for easy unloading.

But the whole circus didn't leave Terrace Park. The family kept a few elephants, including their beloved Tillie, at the estate. (A "T"-shaped window in the home is likely an homage to her.)

During all those years, the stories and legends piled up in village lore. One story goes that Robinson took a zebra-pulled chariot to the tavern to buy his newspaper. Another is that "Wild Bill" Hickok honeymooned at the house in 1876. There are stories of animal stampedes and elephants plowing local gardens.

Tillie herself is the biggest legend. Her 1932 funeral -- yes, the family's prized elephant had a funeral -- was a spectacle, complete with performing elephants and a plane dropping carnations from the sky.

Her headstone stands in front of the house, but where she is actually buried is a mystery.

"They moved the stone (to its current spot) when the property was developed, but where they moved it from was lost," Early said.

One story is that the Robinsons threw Tillie down a well but had to cut her into pieces to make her fit. Some say her legs were made into umbrella stands or tables.

We may never know for sure. What we do know is that the Robinsons sold the house in 1941, Early said. Its story continued with years of abandonment that preceded the escape from potential demolition in the 1960s. Current owners Becca and Doug Worple bought the home in 2005.

Its history seemed a perfect fit with their own: One of their first dates was to the circus. A framed invitation to their 1996 engagement party testifies to its circus theme. Becca's aunt took the behind-the-scenes circus photos that now decorate the home's walls.

When they moved in, the Worples embraced the John Robinson Circus history. They searched eBay for memorabilia. The posters and letters and other items they found became a major part of the home's decor. They hosted yearly parties and asked attendees to dress as sideshow acts. When they knocked out a wall and added pocket doors, they mimicked "JFR" initials from the floorboards in the glass.

And in 2007, they brought the circus back. Becca contacted Ringling Bros., which was scheduled to come to town. They sent clowns, jugglers and dancers to perform for local children under the big tent she'd set up.

"The clowns arrived and they all came jam-packed in a car, like you'd expect," she recalled.

Along the way, they've also done some major renovations to the home. They turned half of the second floor into a large master suite with a bedroom, bathroom and closet.

When finishing the third floor, they added a cupola -- old accounts said the house used to have one. In the space itself, they created a living room/game room, bathroom and extra room that could be a small bedroom or office.

Most recently, they remodeled the kitchen, painting the exposed brick white and added new appliances and cabinetry. Also new is a porch with a fireplace and projection screen.

Now the Worples, like the Robinsons before them, are moving on. With a daughter in college, a son who's a year from high school graduation and Doug's busy travel schedule, they just don't have the people to fill the more than 5,000-square-foot home anymore.

As they say, the show must go on. New owners will add to the home's history.

"We are just caretakers of this amazing place," Becca said. "It's been such a joy to be a part of this story."