Home Tour: Terrace Park Tudor with river views has a fairytale feel -- and a story to match

Come Halloween, though, the story turns to horror
Posted: 5:00 AM, Oct 26, 2018
By: Shauna Steigerwald | WCPO contributor 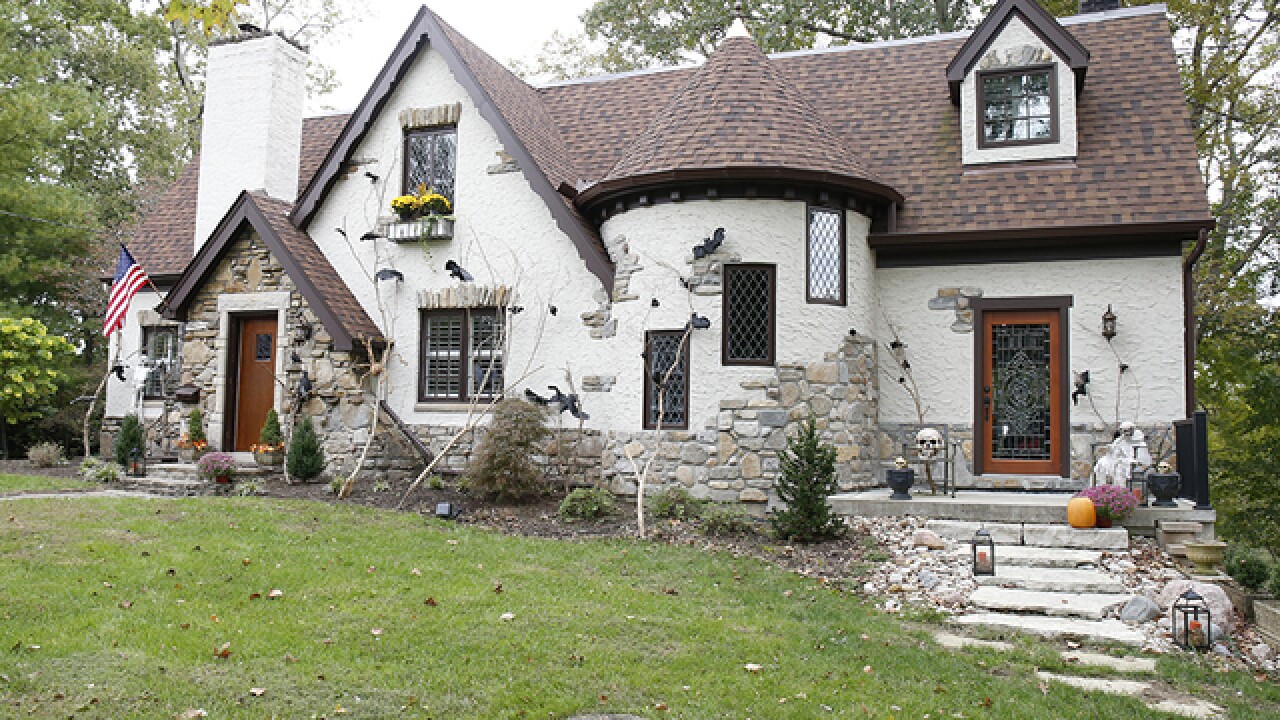 Copyright 2018 Scripps Media, Inc. All rights reserved. This material may not be published, broadcast, rewritten, or redistributed.
Gary Landers | WCPO contributor
<p>The front of the Terrace Park home of Bo and Tina Hesser.</p>

TERRACE PARK, Ohio -- With its Tudor style and beautiful views of the woods and Little Miami River, Tina and Bo Hesser's Terrace Park home has a fairytale feel. It has the story to match.

Many years ago, the place where the home sits belonged to an artist named Charles Meurer. He was known throughout the land for his trompe l'oeil paintings. Even today, eagles, herons, beaver, deer and coyotes roam the place he called home.

Meurer had a daughter, Caroline. A man named Anton Burger fell in love with her.

One day, Burger went to Charles Meurer with a little model of a house.

"He said, 'If I can have your daughter's hand in marriage, this is the house I will build for her,'" Tina Hesser said.

Meurer must have given his blessing. Burger built the house, and it's astonishingly similar to his little model. In such a beautiful setting, it seems likely that the couple lived happily ever after.

That wasn't the end.

The Hessers moved across the street in 1984. When the Burger house went up for sale in 1998, Tina went over to check it out -- and was immediately struck by the setting.

"I walked down the driveway and saw the back yard and I said, 'We'll take it,'" she said. "Then I thought, 'I guess I'd better call my husband and tell him I just bought a house.'"

Tap here or tap the image below to view more photos.

Since then, the Hessers have added to the home's story. In 2005, they expanded the kitchen, adding huge windows to let in the jaw-dropping view.

Then, in 2016, they built an addition with a deck, screened-in porch, great room and a bar nestled into the new turret. Upstairs, the addition created a large master suite, with big windows to let the view into the bedroom and an elegant master bath.

From the outside, the addition looks surprisingly seamless. Tina credits the work of architects Wentz Design and contractor Michaelson Homes with how well things blend.

With the changes they've made, the couple has added touches that reflect their lives. A cedar mantle in the great room and stones from Michigan covering the fireplace and bathroom floor remind them of Cedarville, Michigan, one of their favorite places. A "quasi-nautical" theme in the great room reflects their love of sailing.

Their biggest loves -- their three children and two grandchildren -- were the biggest reason they wanted more space.

"We entertain a lot, and our family is growing," Tina said. "We love nothing more than having our kids and grandkids over. They're the loves of our lives."

They'll be having many of those family members over on Halloween night. It's a big deal at the Hesser house: Tina estimates they get between 200 and 250 trick-or-treaters and give out 15 bags of candy each year.

They also give those trick-or-treaters one heck of a show. Bo and as many of their children and other relatives who can make it dress up in scary masks; they even have a coffin for someone to lie in. A fog machine, torches and fire pits help set the spooky mood.

In recent years, they showed "Thriller" on a big screen so it looked like the zombies were coming out of the woods.

"It's the haunted house of Terrace Park," said Tina, whose role is to intercept groups with little kids and keep them from going into the scary area. "Every year it gets bigger and better."

Bo used to take at least a half day off work to set things up. Now that he's retired, he has that much more time to work on it.

While they're busy building their own story in the home, the Hessers still value the history that happened before they came. A Meurer painting hanging in the original dining room shows his perspective of the house. Tina likes telling stories about the Burgers, like how Tony brought stones up from the river and hand-built the seven stone retaining walls going down the hillside. (It must be even more spectacular in the spring, when the hundreds of daffodil bulbs Tina has planted are in bloom.)

She also likes to talk about the huge train display the Burgers had in the basement and to show Caroline's murals, which still adorn the basement walls today.

She really gets excited when she flips through a journal written in Caroline Burger's lovely cursive about the building of the home, from 1938-1939. It's full of little details, like Caroline's reflections of haggling with contractors over prices that sound miniscule today. Tina paid $25 dollars for the journal -- but to her, it's worth 100 times that amount.

The Hessers also still have Anton Burger's little model of the house. It's fitting that the thing that began the home's story remains with people who cherish retelling it -- and who are taking great care to preserve that legacy with each new chapter that they write.