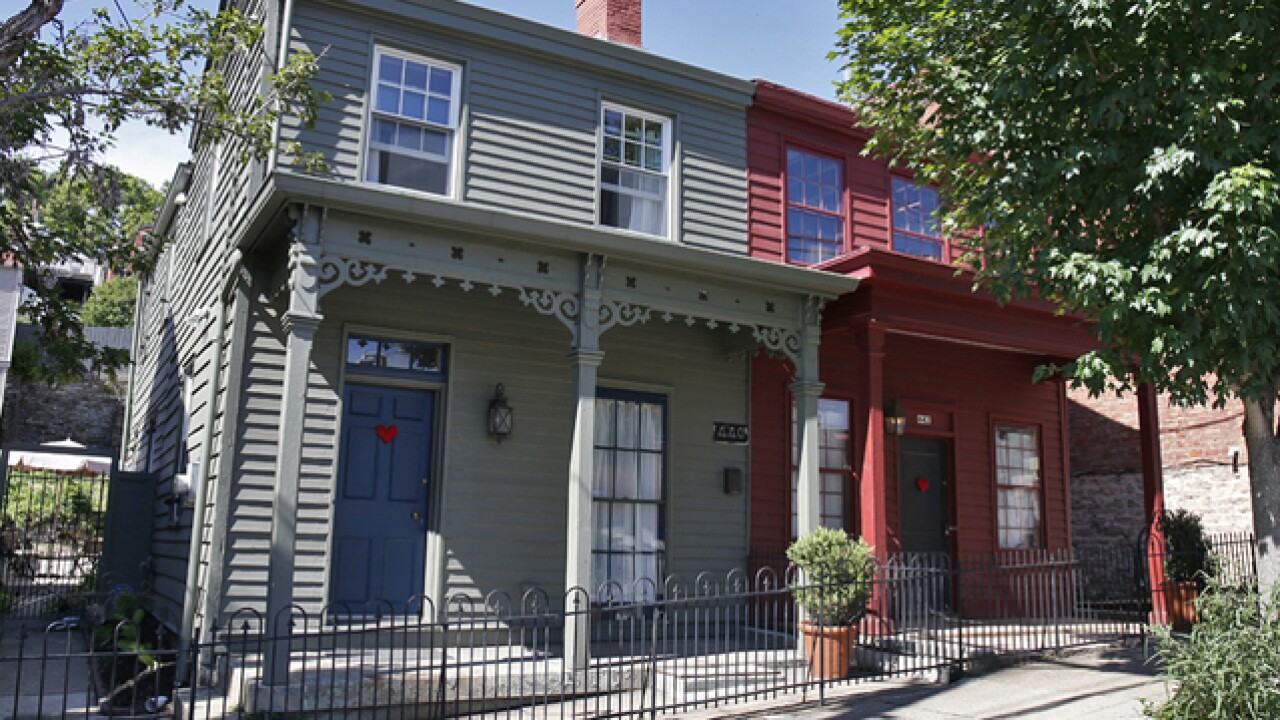 CINCINNATI -- Before he went into buying up and rehabilitating old homes as a general contractor, Kansas-reared Ron Tisue served four years as a U.S. Navy weatherman in Antarctica and earned a bachelor's degree at a small college in Missouri and a master's in fine arts from the University of Hawaii. For 12 years, he taught and administered art programs in the old Forest Park City School District.

Somehow, all of that education and work experience -- as well as his marriage to wife Cynthia and the birth of daughters Susannah and Diana -- is culminating at one of the oldest residences in Cincinnati, a once-neglected pair of 1830s houses on Prospect Hill.

Tisue, who will be 82 on his next birthday, was living on a farm in Loveland and had been helping a fellow Forest Park teacher salvage artifacts from condemned Cincinnati residential and commercial buildings -- including the Albee Theater -- when he experienced an epiphany. His barn was overflowing with "stuff," and selling it wasn't reducing his stockpile a whole lot.

"I started thinking, 'Why save all these artifacts when you can save the houses?' " Tisue recalled. So he started buying in Prospect Hill, where he had been doing a lot of "junking." His construction skills blossomed to the contractor level.

All told, Tisue has owned 23 Victorian houses in Prospect Hill, where he lives nearby at his current projects at 440 and 442 Liberty Hill. He has seen property values rise dramatically in the little neighborhood, which he said at one time was "such a trashed area no one wanted to live there.

"When I first came to this hill, which was in '74, I had my choice of properties," Tisue said. "No one cared for this real estate. ... But these are such treasures. There's so much history in them. I just love doing this."

The first house started life as a single cabin-like structure built in the early 1830s for a man Tisue said city directories show was a welldigger and furniture-deliverer. It was expanded over the years and eventually became two houses that shared walls, support beams and rooflines. By the time Tisue bought the houses in 2010 and 2012, they were rotting, smelly and a big, big mess, he said.

The first change Tisue made to the homes was cosmetic.

"I made them look good on the outside for the neighbors and the city," he said.

Then, employing the blood, sweat and tears of friends and family, Tisue worked steadily for three years to complete the makeover in 2016. Major projects included installing new mechanical and electrical systems, gutting the kitchen ceiling, vaulting its ceiling and adding a bathroom. Tisue designed and built with his daughter Diana's boyfriend, Charles Marxon, a period-perfect steel and iron fence along the sidewalk, replaced the roof and installed patio pavers upside down so they resemble bricks.

The interior work, all done with preservation in mind, was extensive and described by Tisue in detail as he led a tour of the two houses. (Our photo gallery provides a good sense of the "before" and "after.")

Tisue's other daughter, Susannah, a commercial potter, with her husband-furniture maker Michael Miretello and their 4-year-old son, Theo, moved from a small, pre-World War II apartment in Brooklyn into the 1,700-square-foot, 2-bedroom, 2-bathroom house in December.

"We know we'll outgrow it eventually," Susannah said, "but for us, it's a nice size. I like the idea of small houses because there's less to take care of, less to clean, and you can be in separate rooms but not far from your family."

She said they love living so close to the amenities of downtown, as they did in Brooklyn. And, Susannah said with a nod to her father, "It's really nice to live in a house that's constructed in a way that does justice to the building."

It will be at least another two years before 442 Liberty Hill will be ready for occupancy. Several rooms have been cleared, walls have been exposed and repaired, but the place is filled with stacks of salvaged doors, old windows and carpentry tools. Up until now, Tisue said, 442 mostly has been used for storage and as a workshop for him and Miretello, who fashioned the cabinets in his family's kitchen.

The comfortable small-family home at 440 with all modern features and cozy outdoor spaces might have been hard for most people to envision when Tisue bought it. The house was covered with wild vines, and its side and back yards were totally overgrown. The porch was collapsing and some of its gingerbread was long gone. Sunlight streamed in through holes in the roof. Among its interior issues, the ceiling kitchen in 440 was just 7 feet high.

But there were many discoveries that fascinated both Tisue and his family, especially his daughter, Diana, a former Cincinnati real estate agent now working as a project manager for the National Trust in Washington. The history of her father's houses fascinated her and inspired the type of makeover he envisioned.

Clearing out the house and then peeling back the rot uncovered clues to 440's past. Tisue found original doors intact, original shake shingle in the attic, ghost lines where the staircase had been, pig hide in the walls that was used for reinforcement, wide timbers that were sawn in a pit by a team of two men and a horse, custom-hewn wall boards that were wider at one end than the other, and more.

A natural salvager, Tisue said he saved everything he possibly could during the three-year rehab of 440 and is doing the same in 442, which is larger and will feature three bedrooms and two bathrooms.

Next up for Team Tisue will be to convert a historic building in Walnut Hills into street-level retail shops and a second-floor studio for Susannah's SKT ceramics company and a woodshop for her husband.