Home Tour: Pink painted lady was 'meant to be' for Columbia Tusculum couple

'Can't believe I'm going to live in a pink house' 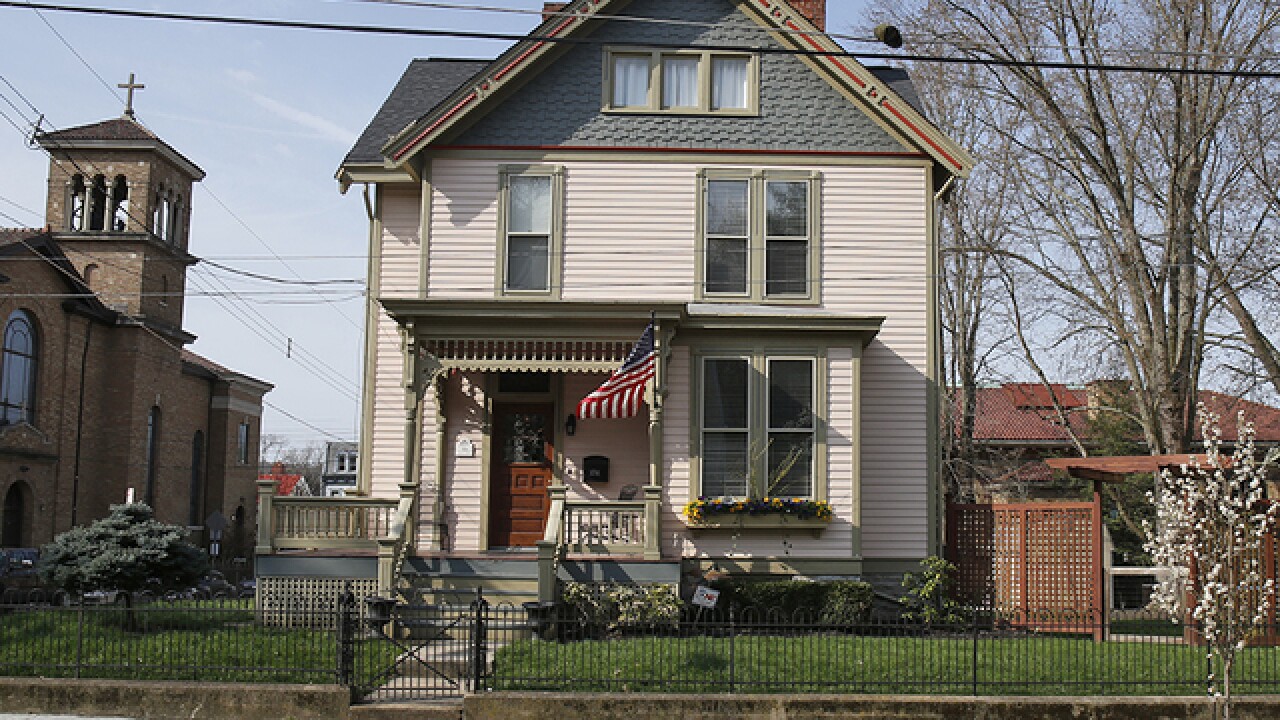 CINCINNATI -- While preparing to move, Janette Yauch saw a Victorian home in the real estate listings she liked to peruse.

The 1884 pink painted lady in Columbia Tusculum had original features, such as a staircase and wood floors with mahogany inlay, alongside updates including a new kitchen and finished third floor. It sat on a double lot with a large driveway and was within walking distance of restaurants, bars, even a church.

There was one big problem: The move she was planning was to Minneapolis for her marketing job with Procter & Gamble.

Remarkably, when it was time to return to Cincinnati two years later, the house was back on the market. This time, she and her husband, Matt -- they married at St. Stephen, just across the street, the same year they moved back -- bought it.

That was seven years ago. They now share the home with their 5-month-old daughter, Mackenzie, and Wheaten terrier, Tre. Their pet's name reflects the fact that in Minneapolis, the couple lived in separate residences on 33rd Street. That was the second time they lived on the same street, but not together -- they met while living on the Parkside in Mount Adams.

When they first went from neighbors to housemates, they didn't have to do much work on the new-to-them Victorian home because previous owners had already completed the modern updates. The couple decorated their space in a traditional style with pops of color and items that reflect their life together.

For example, to create a central focus of the living room, Yauch cut up and collaged a historic map of Cincinnati. Amish-built furniture, including dining and end tables and a dog crate, peppers the first floor. An older piano in the dining room was Janette's 30th-birthday gift from Matt, who works as director of data science at E.W. Scripps, WCPO's parent company.

Upstairs, the office has another gallery wall of maps, framed pages from an old atlas. Those represent places they have been or hope to go.

Their daughter's nursery, outfitted in blues, blacks and grays, has a nautical theme.

"We didn't know her gender before she was born, so we went with a gender-neutral, nautical theme," Yauch said. "We love boating. We have a boat that we take on the Ohio River."

The finished third floor has been especially valuable since they became parents: It serves as an "apartment" for Janette's mom when she comes to help out with the baby.

More recently, and in time for their home to be part of that tour, the couple made some bigger changes to it. Last year, what started as a project to replace the small landing on the back of the house with a large deck, a way to expand their living space outdoors, grew into both an indoor and outdoor remodel. Besides adding the large deck, with ample space for an eight-person dining table plus a large couch under a pergola, they transformed an unusable screened-in porch into a second full bathroom and a mudroom. The latter allowed them to bring the laundry appliances up from the basement.

While they were at it, they moved the back door so it opens into the new mudroom rather than the kitchen. (The door, by the way, has leaded glass in a similar pattern to the front door's original panel.) With that change, they had space for a table to create an eat-in kitchen.

After adding the full bath, they converted the tiny coat-closet-turned-half-bath, awkwardly situated in the entry area, back into a closet.

The changes haven't impacted the home's historic character. With the deck addition, they chose rails that look Victorian so they wouldn't seem out of place. Indoors, eye-catching, original details such as exposed brick, stained glass, woodwork and two original, functional fireplaces on the first floor stand as a reminder of the home's history.

Yauch said she wishes they knew more about that history. Despite her husband's trips to the library, they haven't been able to learn much about the home's past or even find an old photo.

She guesses it probably didn't always have the blush-colored exterior that it does today. When they moved in, Matt wished it didn't.

Yauch liked the color. After all, she's a fan of John Mellencamp's "Pink Houses."

They repainted the house a while back. It's still pink.