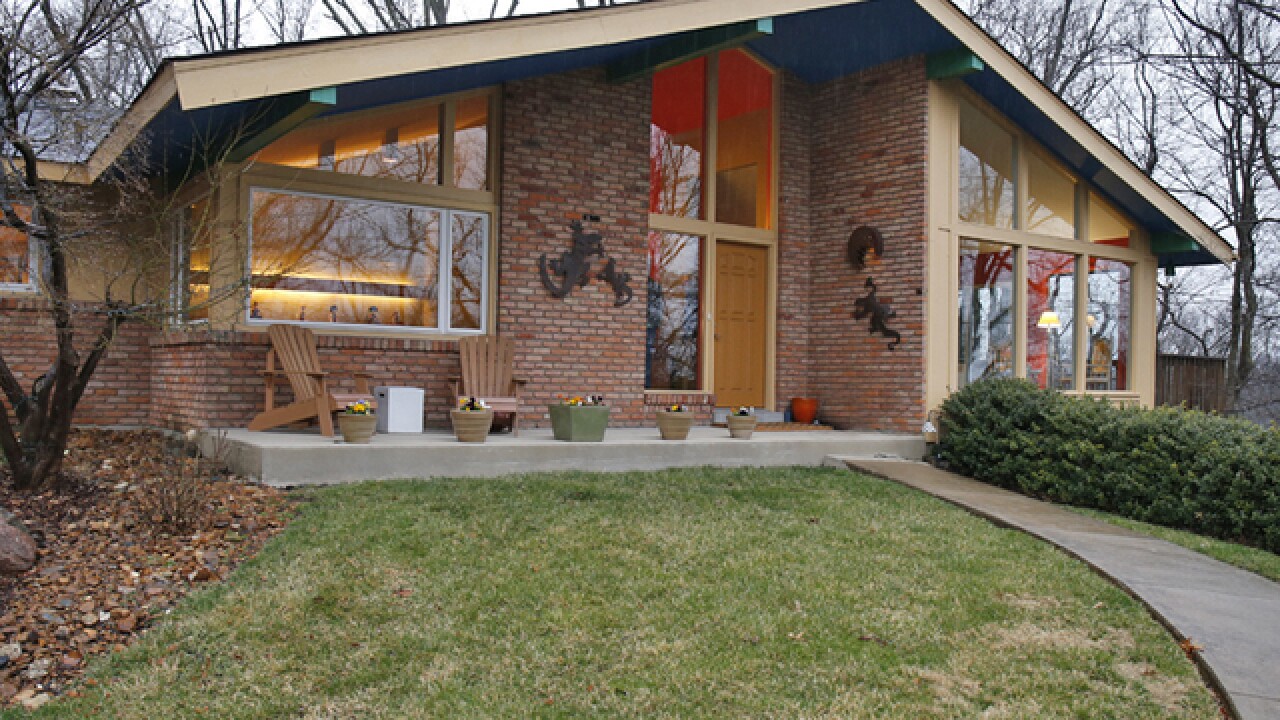 Copyright 2018 Scripps Media, Inc. All rights reserved. This material may not be published, broadcast, rewritten, or redistributed.
Gary Landers
The front elevation and entrance of the mid-century modern home of Michael and Sylvia Leal in Wyoming photographed Wednesday, March 9, 2016. (Photo by Gary Landers/WCPO)

It’s where they fell in love over beer and tamales in the wee hours one night when their two youngest daughters from previous marriages — schoolmates at Wyoming High School where Michael taught Spanish — schemed to make them a match.

It’s where she met his family for the first time, where they blended their five children into one family and where they had 100 people over for his 50th birthday party.

But it’s time for the couple to move on and find a buyer for the 1962-built house the couple transformed from a place decorated in a style that Michael said had “no rhyme or reason” into an open, brightly colored showcase of mid-century design that’s fit for modern living.

The Leal’s 4,200-square-foot, four-bedroom house on Compton Road went on the market earlier this month for $600,000, and they’re already designing the details of a courtyard condominium they are having built in West Chester Township’s Villas of Park Place development.

“It has been an ideal place for us, and our girls have felt connected to the house. They’re sad that we’re selling,” said Michael, now retired from his teaching job.

But with Sylvia — a native of Mexico City and a career Procter & Gamble research and development chemist — approaching retirement age and their five children out of the house, they’ve decided to downsize, to give up gardening and shoveling snow and to inject more “freedom” into their retirement years, Michael said.

“With the patio home in West Chester, we can close it up and leave the country from January to March. We can go to our favorite places like St. John (U.S. Virgin Islands),” he said.

Behind them they will leave places in the house that have become their favorites, since 2004 for Sylvia when she moved to the United States and since 2008 for Michael when he married Sylvia in the Pacific Coast resort town of Zihuatanejo, Mexico.

“I love the front room, especially those two chairs around the round table,” Sylvia said. “The morning sun is just gorgeous.”

Michael said he’ll miss spending mornings with a cup of coffee and a book in one of the Adirondack chairs on the front porch. “And the back deck is an amazing place in the summer,” he said.

Sylvia learned she was going to be transferred to Cincinnati by Procter & Gamble and began researching the area, hunting for a home. She read in Newsweek that the schools in Wyoming were ranked No. 12 nationally.

Not knowing she would meet and marry a Wyoming High school teacher, a Mexican-American originally from Findlay, Ohio, Sylvia remembers saying, “That’s where I want my daughters to go to high school.”

She bought the house on Compton Road with the soaring ceilings and huge windows, attracted by its private setting and flag-shaped lot (a long driveway on a narrow strip of the property connects the 0.9-acre lot to the road).

Sylvia, by then divorced, considered selling the house in 2007, the year she became engaged to Michael. But the real estate prices were in a tailspin that had created a buyer’s market.

“In the end, we decided it was a bad idea to sell the house because the market wasn’t good,” Sylvia said. “When we decided to stay, we thought we had to do something to make it our own.”

They began the process of transforming the house by tearing down walls and space-dividing cabinetry in what is now the 345-square-foot great room. They stole space from a large first-floor laundry room to create a large master bathroom oasis. They punched out a small window in the master bedroom and turned it into 12 feet of windows that brought the backyard inside.

And, oh yeah, they did something about the colors on the walls, colors that Michael said included deep sky blue in the living room, “super red” in the dining room, light blue in the bedroom and whites and pale yellows here and there.

To their rescue came their friend, Tracy Dean of Peppercorn Interiors. She studied the couple’s color palette, pulling bright orange and yellow from Sylvia’s playful “La Luna” and “Sol” sculptures by Sergio Bustamante, which greet visitors in the foyer, and contrasting them with more muted green, gray and a little black. Dean showed the couple an Anthropologie furnishings store catalog and suggested they draw inspiration from it.

A circular driveway fronts the house. Attached to its left side is a two-car garage and ample carport. The front of the house, with its vaulted entry and high, angular windows, strikes a pretty pose during the day and is even more dramatic at dusk when the interior lights are on.

Three openings — to the formal living room, the central dining room and a hallway that leads to the laundry room, a powder room, the master suite and the great room — branch off a vaulted, 10-by-10-foot foyer painted in olive green and orange.

Michael showed how, standing under the high living room opening and looking all the way through the dining room and into the kitchen/great room, Dean’s color scheme pulls the house together.

The wide-open great room Sylvia envisioned and achieved is the heart of the house where she whips up original Mexican food and the couple hangs out with a glass of wine on a gray leather sectional. The room includes two bright yellow skylight boxes, a three-sided corner fireplace, a free-standing bar and kitchen with all the modern bells and whistles, such as a 3½-by-10-foot granite-topped island and a professional Blue Star stove.

The Leals will be downsizing their furniture collection featured in the great room and elsewhere in the house — much of it inspired by great mid-century designers such as Isamu Naguchi and George Nelson — but they will leave behind the house’s ceiling lights, including the orb fixture suspended above their glass breakfast table in the kitchen.

Sliding glass doors open to a large backyard deck off the great room, and there is a guest room between it and the garage. Shrubs and trees surround the yard, providing near-total privacy.

“There are no neighbors looking in,” Sylvia said, so the Leals took down drapes and blinds in many places in the house, including those in the great room.

Two major changes the couple made stand out in their master suite. After living with just one small window on the back bedroom wall that their bed faces, they decided they wanted to bring in the same degree of sunlight the rest of the house gets. So they replaced it with a 12-foot opening that consists of one big picture window and two others flanking it.

And the bathroom simply had to go — and grow. They chopped off the back of the hallway laundry room and turned it into a unique shower that features a half-glass wall and pebble-stone floor. It was Michael’s idea, Sylvia said, to copy the pebble-stone look in the rectangular mats, if you will, in front of their new his and hers vanities.

The lower level, its two large, carpeted bedrooms, family lounge and 29-by-25-foot recreation room are reached via a classic mid-century floating staircase, beneath which is the couple’s neatly stacked wine collection.

The star of the basement is the rec room and its three tables: billiards, air hockey and foosball. But mid-century modern fans will be drawn to its fireplace: a dome-shaped, white-enameled model made by Majestic in the late 1950s that sits on a simple hearth of crushed rocks.

One of the few hints as to what the house must have looked like when Sylvia and her daughters first set eyes on it is found in the basement family lounge. Look closely at the room’s walls and you can see knots in the wood paneling.

Yes, back in the day it was a classic knotty pine room fit for a country cabin. Today it’s a sunny bright, modern beauty ready to make memories for another family.