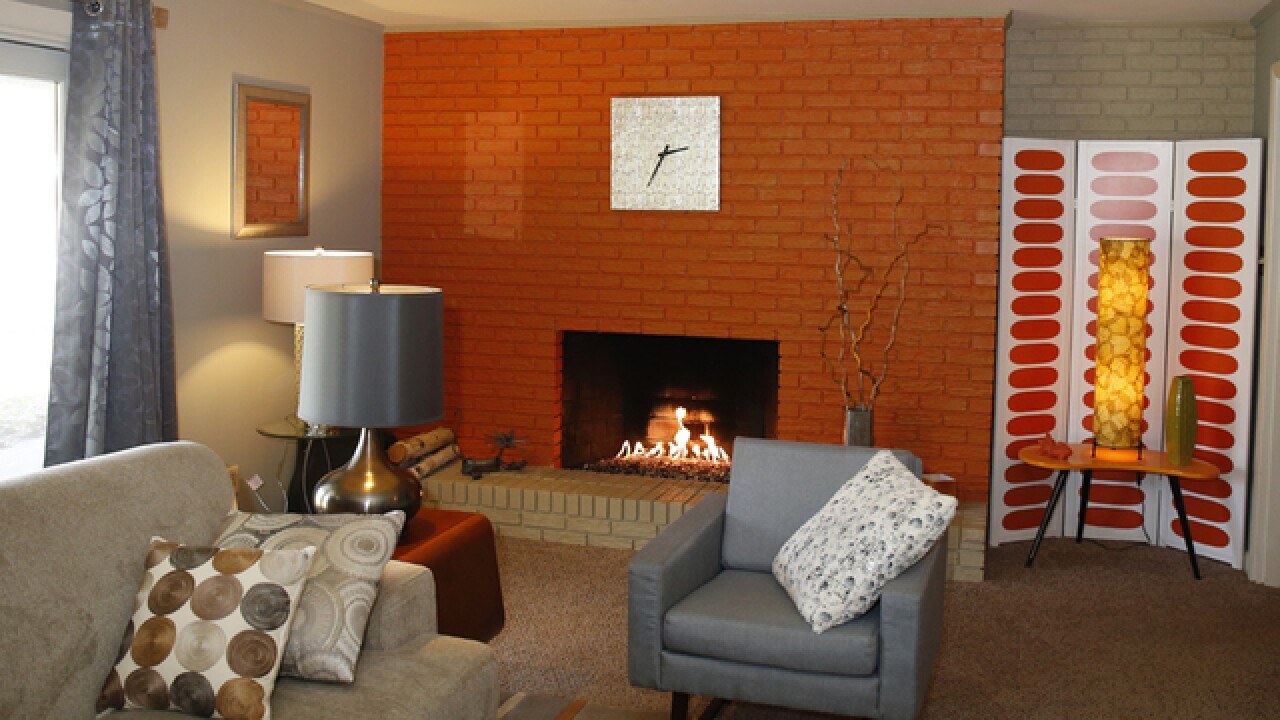 Copyright 2018 Scripps Media, Inc. All rights reserved. This material may not be published, broadcast, rewritten, or redistributed.
Gary Landers
The lower level fireplace, photographed in the Westwood home of Rafe Jones and Kelly Hale Tuesday, March 29, 2016. The home will be featured on the Westwood Home Tour April 24, 2016. (Photo by Gary Landers/WCPO)

They like that the house’s 21st-century kitchen isn’t open to their mid-century motif dining and living rooms. The fact that previous owners resisted the popular trend of knocking down walls allowed them to decorate each room in individual styles. It’s a mix of vintage and new art and furnishings.

The decorating they’ve done since buying the three-bedroom, three-bathroom house in November 2014 will be on public display during the Westwood Home Tour, which runs from 1 to 4 p.m. on April 24.

Both men like color, and luckily for them Jones’ favored gray and orange go well with Hale’s favored teal.

“The cool thing is that orange and teal work together. (The combination) sold a billion milkshakes for Howard Johnson,” Hale joked.

Luckily for the color lovers the house has two substantial brick fireplaces. Kelly claimed the upstairs one and painted it teal. Jones painted the lower-level fireplace orange, keeping a little of the previous buff color for balance.

Both men brought to their relationship an admiration for mid-century style. Jones, a Hamilton High and Miami University graduate, picked up his flair from his grandmother. Hale, a Lakota High and University of Cincinnati graduate, is a classic car aficionado as well as an avid collector of things from the ’50s and ’60s.

The two house-hunted in Northern Kentucky and were “saved by the bell,” Jones said, when Kelly agreed not to buy a fixer-upper there. Homes in Park Hills and Fort Wright, they said, weren’t in their budget, but one in Westwood that a house-flipper friend of theirs knew about had potential.

“When we went to see, there was a Realtor there with two women, so we literally started walking around the outside peering into windows and just fell in love with it immediately. This was it,” Jones said.

“I got back in the car and called the Realtor and said ‘We want this house and are willing to make an offer today,” said Hale, who learned the ways of real estate by watching his dad buy and sell at lot of houses. “The two women had put in an offer, but for some reason, we got it.”

The $150,000 house had been updated some, but there were original touches in many of the rooms, such as tile, cabinets and countertops in the bathrooms and a louvered doors and window shades throughout. Several original pocket doors had survived.

Jones picked the color -- bright orange -- but Hale painted the front door and trimmed out the dusty blue shutters on the front of the house with white so they would pop. Inside is an ample entry hall with newer slate flooring. To the left, the dining room sparkles with glittery décor, a toned down look from what was there when Jones and Hale bought the place: It’s largest wall was one big mirror.

“That was the first thing to go,” Jones said.

Beyond the dining room through a door is the kitchen. It is contemporary, but its layout is original as are the cabinet bodies (the doors have been refaced). Hale said he wishes past owners had not removed a peninsula that closed in the cooking area of the kitchen, but he is glad that the cabinets, counters and appliances weren’t reconfigured.

One funny thing about the cabinets, Jones pointed out, is that there is a laundry chute hidden in one of them.

“You have to lie down to put anything in it,” he said. “I kept losing all my coffee cups because they’d fall into the laundry.”

The living room sits off the back of the house, running the length of the kitchen and dining room. It has a door to a long balcony that overlooks the grassy back yard, a new tool shed and a number of mature trees. Among the eclectic artwork in the room is an image of a Boston Terrier, the spitting image of the couple’s beloved pet, Claire, atop a Vespa scooter that’s just like the one Kelly stores in their two-car attached garage.

On the opposite side of the house, down a hallway accessed through a pocket door in the entry hall is the bedroom wing. The green room in the back corner is for guests. It features artwork displayed in pairs: dreamy watercolors of a South Pacific man and woman that Hale found at a thrift shop in the 1980s; matching art nouveau ballerinas made of china that were his grandmother’s; and comedy and tragedy masks with instrument bodies (Hale is an actor and a singer). A mid-1940s, flip-top Zenith Cobra record player made of Bakelite plastic that he got from his sister sits atop one dresser.

Artwork in the master suite, the gunmetal blue and white-trimmed room that faces the cul-de-sac, includes a painting of a boy done by Kelly’s mother. The room’s windows have white marble sills and there are double closets with louvered doors.

The couple uses the third room as an office.

Guests get to the lower level down a carpeted stairwell off the kitchen. The family room features the orange gas fireplace in which Jones and Hall “burn” glass beads, just like they do in the teal fireplace upstairs. The room’s back wall is almost all glass, with a double sliding door in the center that opens to a concrete patio and much of the V-shaped, half-acre property.

Around the corner of the family room before reaching a door into the garage is the couple’s wet bar. It features a shiny black bar top, three stools, a small mid-century style couch, a refrigerator, six floating glass shelves for liquor and a reproduction brass propeller airplane model.

“We call it our Atomic Rocket Lounge,” Hale said.

The star of the room, however, might be the life-size plastic sheep model that stands in the corner, around whose neck hangs a sign that reads, “Do not remove under penalty.” Hale said he found the sheep while getting some “retail therapy” in Richmond, Kentucky.

“The sales woman said ‘That’s not for sale. It’s our mascot for Serta Perfect Sleeper,’ ” Hale said, but she sold it to him anyway for $200. “We call him Sir Sergio Serta III, Esq.”

To some, Jones and Hale’s house might look common from the street. But the interior is just what they wanted and the place is “built like a fort,” Hale said.

“It’s an incredibly-built house as far as the materials and engineering go. It doesn’t leak a drop of anything and as far as I know, it’s a one-off. There’s nothing like it on our street.”