Home Tour: Living in this Anderson Twp. mid-century modern is like being on permanent 'vacation' 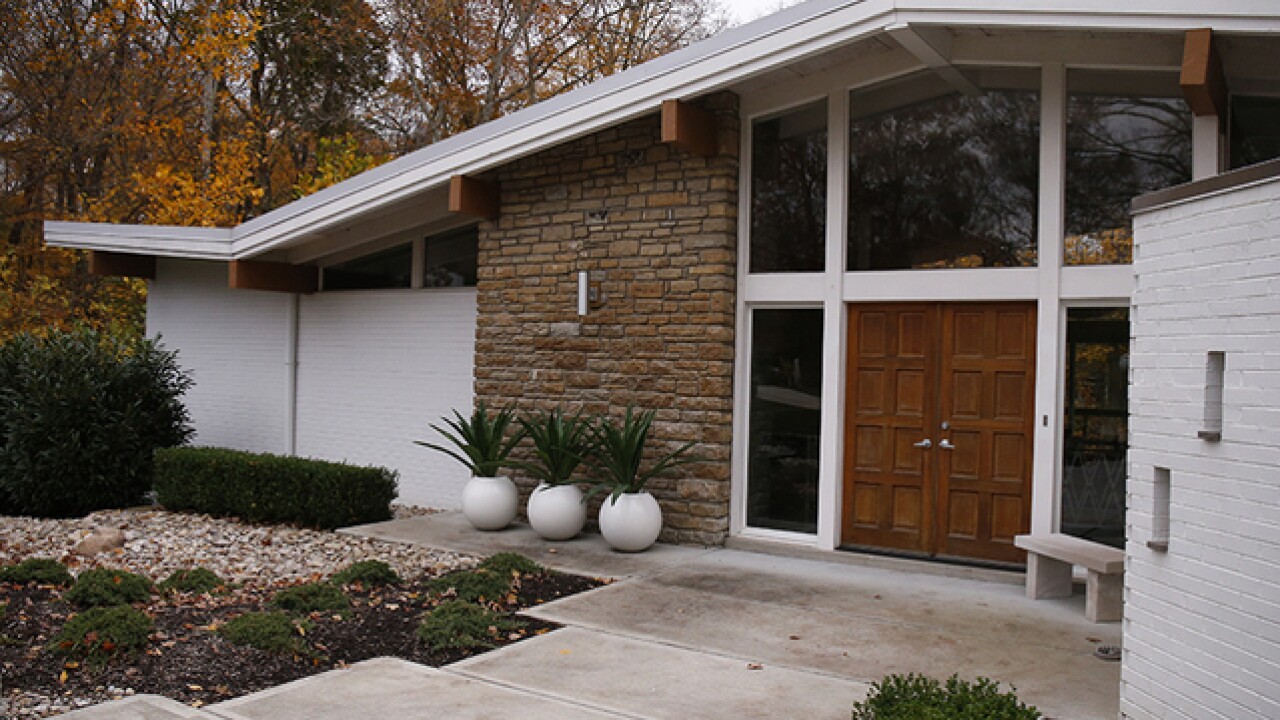 Editor's note: An earlier version of this article incorrectly identified the local mid-century modern group. It is Cincinnati Form Follows Function, or CF3.

ANDERSON TOWNSHIP, Ohio -- To all of us, a house is shelter. A home, on the other hand, is what we make of our house -- the family and friends with whom we share it, the furnishings, the landscaping.

On rare occasions, a house profoundly changes its owners as they make it their home. Such is the case of a 1961 modern house designed by Cincinnati architect Harry Bothwell at the dead end of a woodsy street in Anderson Township.

Six years into their marriage, Illinoisian Guy Wolf and Californian Jane Misiewicz moved to Cincinnati from San Francisco in 2006 to be closer to their aging parents in Illinois and Pennsylvania.

Both had lived in traditional homes most of their lives. They spent their first month in a Residence Inn and the second in corporate housing. People they met suggested they buy a house in Hyde Park. They viewed about 40 of them.

"I finally said, 'I want more privacy and more property. Let's go look over the (Beechmont) Levee,' " said Misiewicz, a UCLA graduate in design who became a legal secretary. To Turpin Hills they went -- and stayed.

The house they fell for resembles the California mid-century modern tract homes built by prolific real estate developer Joseph Eichler (1900-74). Its nearly flat roof peaks in the middle and is supported by heavy, exposed redwood beams. The backside is almost all windows spanning a 46-foot-wide living and dining space that's divided by a two-sided, beige brick fireplace.

"We were really impressed with the beauty of the place and Cincinnati in general," said Wolf, a West Point graduate and career information technology specialist.

"The most impressive thing is that you come in the front door and see this wall of windows and the trees. It was jaw-dropping," Misiewicz said. "It was like, 'Wow, we can breathe.' You don't feel like there are people staring at you."

But the house was far from perfect. Most of the original natural wood paneling had been painted white. The kitchen walls were an odd brown-green color -- the couple came to call this "Bothwell Green" as they discovered it elsewhere in the house -- and the kitchen cabinets were pink.

The light fixtures were all wrong for a mid-century home, the plumbing was backed up and the roof leaked.

"At first, I said, 'It's built well, but I think we made a mistake.' It smelled like a basement," Misiewicz said.

And the place was huge at 3,900 square feet, 4 bedrooms and 3 1/2 bathrooms. Wolf has two grown children, so it was just going to be the two of them, and they had sold off most of their large furniture except for a piano, master bed and large craftsman desk.

The early '60s vibe of the house, however, won him over in a strong way.

Looking out the wall of windows to their wooded lot, he became philosophical about the house's architecture.

"When this was built, we were young and the future was a popular subject. It's what we talked about. And there was this sense of optimism," he said. The house "rekindles in us, at least it does in me, hope for the future."

The future the couple faced when they got their house keys on Halloween of 2006 held a lot of work and a lot of personal change for Wolf and Misiewicz.

"I never thought of a house would have me change the way I think," Wolf said.

But it did. They became nature lovers, preservationists and fans of the "Mad Men" style. Today they are Cincinnati Nature Center members and are active in a mid-mod group called Form Follows Function Cincinnati (3fc), the Hillside Trust preservation organization and Taking Root, a community-based collaborative that protects, promotes and plants healthy trees.

In concert with general contractor Damon Long, cabinet maker Mike Evans and woodworker Mark Dejong, the couple has finished putting their personal touch on every room except for two lower-level bathrooms and the once "Bothwell Green" kitchen.

They plan to use their master bathroom makeover as an inspiration for a new kitchen, which was last remodeled in the 1990s. They will keep its basic layout but put a modern spin on it, using materials similar to those in the bathroom.

A long, concrete driveway leads to the low-lying house and its double wooden door under an angled, overhanging roof. A wide, floating staircase to the lower level splits the terrazzo-tiled entry hall and living room, which is dominated by a restored wall of windows and sliding glass doors, a massive, central fireplace and a plantlike wall sculpture Misiewicz fashioned out of plastic Vitra algue.

A unique feature in the 46-foot by 28-foot space is the wall just inside and to the left of the front door. Made of uncommon pecky cypress, the tongue-and-groove wall was white, but because of its texture, it could be stripped and restored. Dejong tracked down new boards and expertly brought the old wall back to its 1961 condition.

To the right of the front door is another slider that opens to a patio, also restored, that features a tall, white brick wall with peekaboo holes and a floating shelf from which to serve food or drinks.

There's a second door to the patio in the kitchen.

The other wing of the ground levels houses a powder room with an original onyx countertop and new cork floor, faucets, light and frosted-glass door. Further down a hall is the master bedroom suite, which features an attached walk-in closet and remodeled bathroom.

Wolf and Misiewicz upgraded to a king bed years ago and created a cozy nook whose wall paneling extends over the bed to create a canopy effect.

The large, carpeted media room at the bottom of the steps was another major project for Wolf and Misiewicz. Originally, it had a central sliding-glass door to the back patio and two flanking half-wall windows. They had those walls knocked down and filled both spaces with floor-to-ceiling glass to mimic the look of the living room and bring in more light.

The lower level features a second gas fireplace and has three carpeted bedrooms, one that Wolf uses as his office and another that has its own bathroom and door to the patio. The lower-level space includes rooms for mechanicals and laundry, and the couple converted a small storage room into a wine cellar.

The great Finnish architect Eero Saarinen captured the essence Wolf senses in his home of 11 years when he wrote that architecture's purpose is "to shelter and enhance man's life on earth and to fulfill his belief in the nobility of his existence."

That belief, Wolf said, "was not something I was conscience of before moving into our home here."

Misiewicz describes her connection to their home differently.

"You do feel something. ... It makes you feel good. I look around and I see that this is my vacation. People usually have to go places to get a view like this."