Home Tour: Little by little, this Indian Hill home has reduced its energy bills to near-zero

Next up: A wood-pellet stove 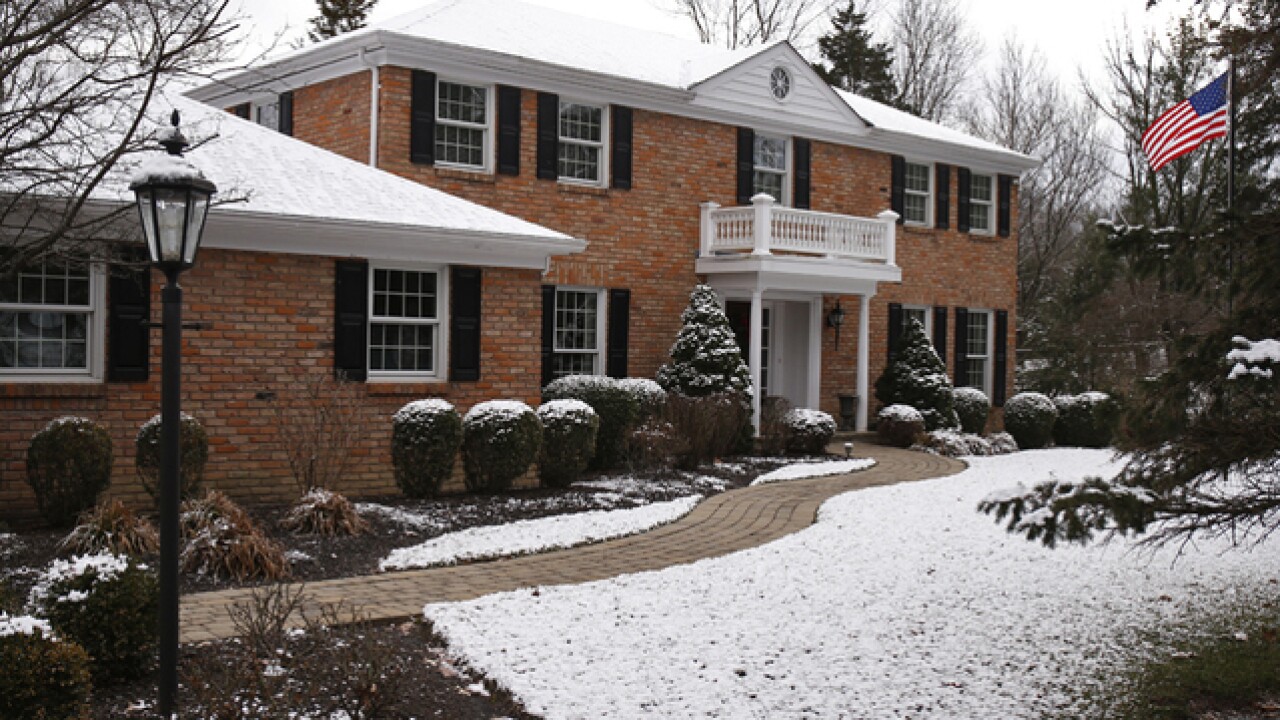 INDIAN HILL, Ohio -- You have to peek out a window in the sunroom or walk around to the south side of Steve and Mary Frances Melink's Indian Hill house to get away from its traditional American ambiance. There, a few feet from the orange-brick building stands a slanted wall of 20 photovoltaic cells that absorb energy from the sun and power the house.

The Melinks' solar panels aren't the only energy-saving system the couple added to their 1974 house over the 20 years they've owned it, but they are the only visible ones. Hidden but essential to the couple's near-zero energy bills are a geothermal heating and cooling system, extra high R-value attic and wall insulation, a heat-pump water system, low-e glass windows and long-lasting LED lights in the most-used fixtures.

Further earning the Melink family all-star "green" status are the one electric and two hybrid cars they drive. Throw in the fact that Steve's Melink Corp. headquarters in Milford is certified platinum by the U.S. Green Building Council's Leadership in Energy and Environmental Design (LEED) program and you could call them superstars.

But when it comes to the style of their 3,192-square-foot, 4-bedroom, 3½-bathroom home, the Melinks are All-Americans.

Steve grew up in Loveland, the middle child of nine and a standout wrestler at Moeller High School. He holds a chemical engineering degree from Vanderbilt University and an MBA from Duke, where he met Mary Frances, a Greensboro, North Carolina native with a master's degree in nursing from the University of Cincinnati. They have a son and three daughters, the youngest of whom is in high school.

The Melinks married in 1984 and moved around until 1987. That's when Steve led them home to Cincinnati, where he scratched his entrepreneurial itch and launched his own small business, which provides clean-energy solutions to commercial enterprises. They settled in Madeira and added on to a small two-bedroom house there before making the move to Indian Hill in 1997.

Steve already had established a commitment to clean energy at his company, where he gives his employees a $5,000 incentive to buy an electric car and leases 25 Toyota Priuses for them to drive.

"I transferred that process over to my home," he said. "It has sort of become an ethic to save energy and reduce our carbon imprint. If I have a brand, that's what it would be: promoting a clean-energy future."

"It's infectious," Mary Frances said of her husband's ethic. "I appreciate the fact that it's good for the earth, and I like that we've been able to integrate it into a very traditional home."

The foundation of Mary Frances' love of classic furniture, she said, was laid in North Carolina, where she grew up a 20-minute drive from the furniture mecca of High Point. In fact, she said, many of their pieces were purchased at furniture outlets there during visits to her parents' home in Greensboro.

"I am from North Carolina," she said, "so I did a lot of shopping when I was down there."

Adding to the classic feel of the Melinks' home are displays of family portraits and groupings of candid shots of their children taken over the years. Then there's the basement they had finished. With its pool and ping-pong tables, big-screen TV and comfortable couches, it quickly became a hangout for the four Melink children and their friends.

The Melinks nearly doubled the size of their kitchen, added an adjacent sunroom off an existing two-car garage and built a master bedroom suite upstairs. Convenient for them was the fact that Steve's sister, Janine, and her husband, Dan Hueber, own and operate Innerwood & Co. of Milford, high-end makers of cabinets and wood trim. The Huebers led the Melinks through a design process in 2004 that resulted in a layout with a timeless look and plenty of space for family parties during the holidays.

A three-sided island with a central sink dominates the room and features 15 feet of granite-topped counter space. Glass windows and doors that open to a wrap-around, concrete-paved patio fill the kitchen's east-facing wall and let in so much light that few switches are flicked on most days.

The room's design reflects three elements Steve said should be part of everything built with sustainability in mind: natural light, fresh air and views to the outside.

"A lot of people are addicted to unnatural lighting," he said. "It's a culture of waste."

Being able to step out of their kitchen onto a totally private patio, feel the breeze and hear the birds is about as good as it gets at the Melink house, the couple agreed.

Steve Melink lives and works in clean- and energy-efficient space. Although his business is to help other businesses meet those tenets, he said, he believes they easily can be carried over to homes.

He recommends homeowners who want to reduce their energy bills begin with a programmable thermostat and minimize energy use by setting it at no higher than 69 degrees in the winter and no lower than 75 degrees in the summer.

Another early project is to add insulation, especially in the attic, where 20 inches of insulation is a good benchmark. "The cost benefits of insulation have the simplest and quickest payback," he said. "It requires no maintenance and lasts forever, and when you sell your house, you get it back in increased value. To me, it's a no-brainer."

Switching to LED bulbs is next on his list. Then comes installing a geothermal heating and cooling system, which can be expensive but will pay for itself in about seven years through energy bill savings of 20-25 percent, Steve said. Last on his list is adding a solar-power system, which has netted substantial tax rebates for many homeowners over the years.

"On sunny days, especially in the summer and fall, our meter runs backwards and we get credit on our energy bill," he said.

"We're not at zero energy here at this house, but we're near zero net energy." Steve said. "All we did was done a little at a time as our budget could afford it -- $1,000 here, $2,000 the next year to do something else. Give yourself five years to make it happen, or even 10 years."

Steve would like to install a wood-pellet stove in the family room's fireplace, because it's carbon-neutral.

Steve and Mary Frances Melink's home is part of the Southwest Ohio chapter of the U.S. Green Building Council's Green Home Tour series. It can be viewed Sept. 16 from 10 a.m. to noon. Find out more at lohre.com/green-cincinnati-education-advocacy/green-home-tours.