A quiet place to retire on the Ludlow riverfront 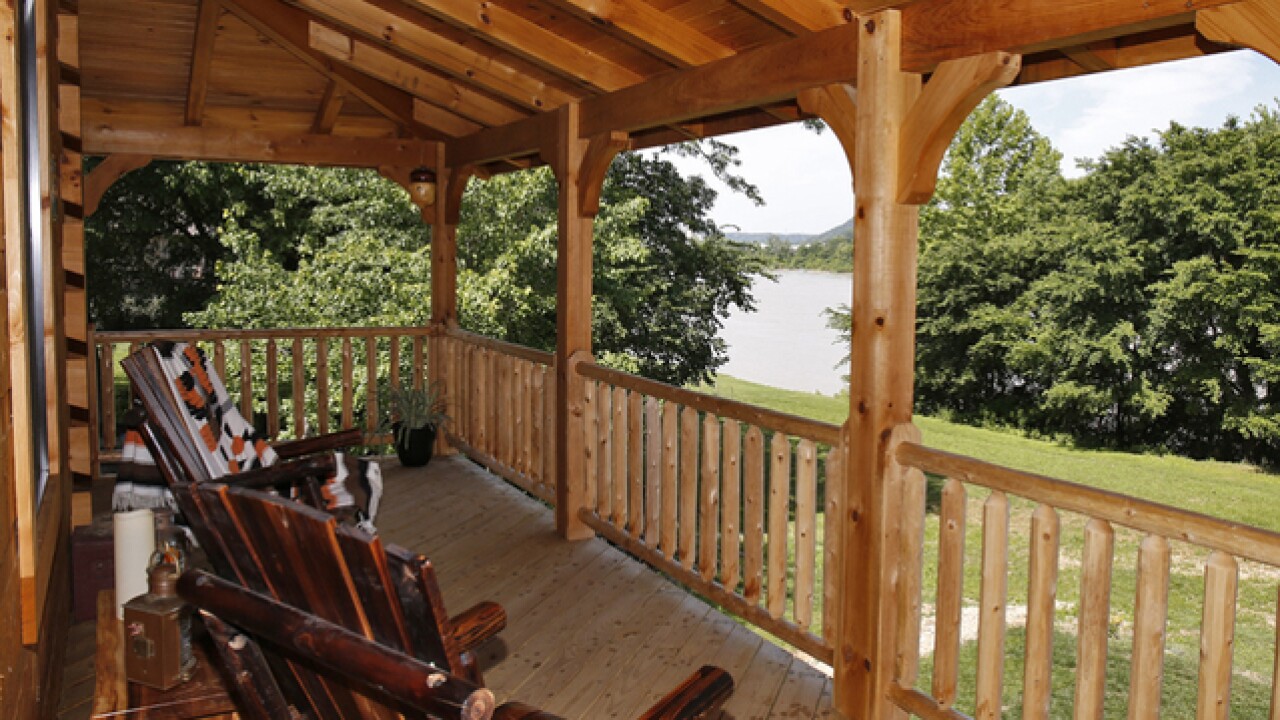 That's the type of home Steve and Paula Chapman built in 2016 on a half-acre Ohio River lot a few blocks from downtown Ludlow.

The Chapmans' two-bedroom, two-bathroom, 1,200-square-foot home has no drywall, no painted surfaces, no curtains and no hallways. Its concrete foundation/garage is 12 feet high, and its interior and exterior walls and floors are made of knotty pine.

The house's all-wood rooms and 15-foot beamed and vaulted ceiling make it feel like a log cabin, but it's actually a "hybrid log home" in that it's framed like a traditional house but sheathed in inch-thick, rough-hewn boards that look similar to whole logs from a distance.

GALLERY: Take a walk through the home this husband-wife team designed together

There's nothing like it in Ludlow, and it's nothing like the 172-year-old Kenner-Closson House the couple owned for 18 years. But it's just what the Chapmans -- who recently welcomed their seventh grandchild -- wanted for Steve's retirement, which he plans to enter a year from now.

"I wanted to retire, and we started in 2015 planning that we will do it in summer 2018," said Steve, who works in marketing for Sprint.

The couple began implementing their plan by downsizing, giving their three children furnishings they each wanted from the Kenner-Closson home and auctioning the rest through the Everything But the House website. The Chapmans considered selling their old house, which had been a Masonic Lodge for years.

In the meantime, their daughter and son-in-law, Laura and Wes Dorger, were talking about building on a wooded Ohio River lot they owned off Ludlow's main street, Elm, that borders the west end of North Attleboro Park. Steve and Paula were dreaming of living in a log cabin at the same time.

"They came up with the idea that we should build here," Steve said, while seated in his new house's great room, off of which all the other rooms in the house branch. "I wasn't sure because it's in the flood plain."

To make a long story short, the Chapmans and Dorgers worked out a property swap -- the Dorgers and their two children got the Kenner-Closson House -- and after nine months of getting their building ducks in a row with city of Ludlow and state authorities, the Chapmans' log-like house was under way.

Steve said they selected the hybrid style of home over a typical log home because it allows for traditional wiring and insulation and the wood doesn't settle, which makes construction faster and easier. The Ludlow natives visited the model log home of Countrymark Log Homes in Vevay, Indiana, and found a compatriot in its president, Ed Demaree, who modified house plans that Paula had drawn.

"I do the building, and she does the designing," said Steve, whose woodworking skills and contacts with all-Ludlow craftsmen allowed him to do the interior work in the home, including construction of a secret office door camouflaged as a bookshelf and sliding barn doors made out of the pine boxes in which Countrymark's log kit arrived.

They exceeded by several feet the flood-plain height requirement for their two-bay garage. With water-flow doors on both the back and front of the house -- which faces the river -- the garage is high enough to accommodate their 2015 reproduction of a classic 1961 Shasta camper they plan to park at south Florida beaches during their retirement years.

The Chapmans kept their backyard design simple -- except for Paula's beloved teepee -- laying turf up to the line of a riverside property whose owner has no plans to develop, Steve said. The twin stairs that lead up to a landing that rises to the high house feature solar lights, and two wooden rockers and a small table sit just outside the front door just off the center of the three-sided, 900-square-foot, covered deck the couple helped build.

"We will add an elevator in the corner of my office for when we're too old to climb these steps," Steve said.

A line of trees partially blocks their view of the Mount Echo Park lookout across the Ohio River in East Price Hill. Steve said he plans to cut the trees back, but only half way.

"What's nice is that on summer nights when the sun is out around 4 or 5, the sun reflects off the water but doesn't bounce back into our faces," Steve said. "And there's always a nice breeze here."

Visitors to the Chapman's home enter off Elm onto a new driveway in an easement that splits two buildings fronting the street. At the end is a house-wide carport and two tall garage doors on either side of the foundation/garage, which is adorned with a large, decorative compass.

The steps leading to the front door are around the back. Guests enter into the great room, which resembles a lodge. Hanging high on the vaulted walls, which are rough-hewn like the exterior ones, are a wild boar head, a bear skin, a set of moose antlers and an Indian headdress.

It smacks of a Western motif, but look around at its design -- all Paula's -- and its eclectic ambience takes shape.

"This is what I call 'wanderlust,' " Paua said of her interior design. "It's almost like going back to how we lived when we were newlyweds (in 1974). Everything is mismatched, but we love it."

All but the kitchen appliances, a "cowboy" kitchen closet that includes a bench and the random-width pine floor from a mill in Maine, is old. One of the barn door handles was Paula's father's trowel. Two antique porcelain sinks had been used by a Ludlow neighbor for planters, and the claw-foot tub in the guest bathroom once served as another Ludlow resident's beverage cooler. All have been reglazed and look new.

About every piece of furniture in the Chapmans' home has a story behind it. Family heirlooms include the sink cabinets, the guest bed that Paula's dad got by bartering, and the couple's carved-wood, canopy bed they bought in their early years together.

The artwork is important to the Chapmans' pasts, as well. In particular is a unique -- there's that word again -- flag featuring the centered red sun on the Japanese flag, writing in an ancient Japanese dialect and a World War II infantryman's helmet. It was made by a Japanese prisoner during the 1944 Battle of Peleliu and brought home by Paula's Marine veteran father as a souvenir.

The flag is displayed in the guest room along with Steve's grandfather's 1811-made, intricately carved walking cane that features a bent-stick handle and an American Indian swastika design.

"We had been living in a historical home, so we kind of stayed historical for walk-throughs and historical events," said Paula, who grew up around collectors. In selecting the pieces for their new home, she said, "We just went room to room and said whatever caught our eyes we were keeping. And we kept the family heirlooms."

"All of this design is pretty much the way we wanted it," Steve said. "And it's all Paula's idea."

"This is a whole lot different place for us, and I like it," Paula said.

So does Steve, especially when they're relaxing on the front porch out back.

"When you're on the porch looking at the river, you don't know that Ludlow even exists. You don't hear anything," he said.