WCPO anchor collects pieces of her past 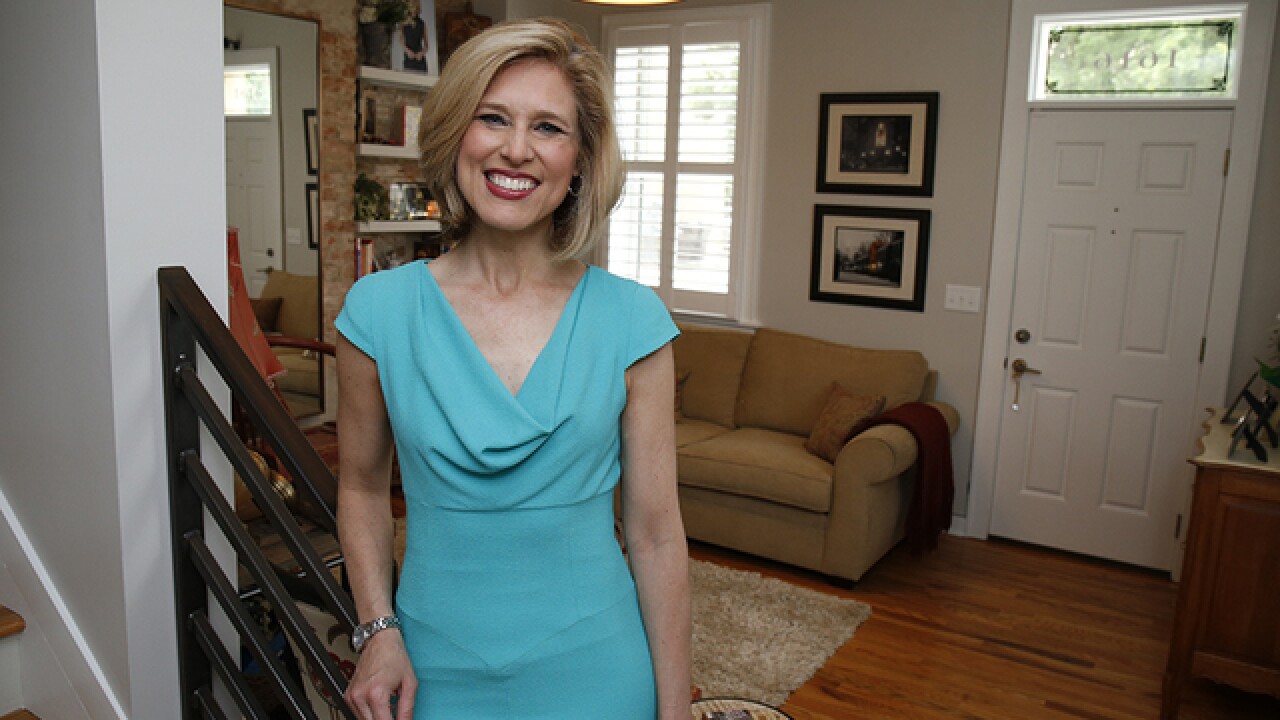 Copyright 2018 Scripps Media, Inc. All rights reserved. This material may not be published, broadcast, rewritten, or redistributed.
Gary Landers
<p>Kristyn Hartman, photographed in her Northside home Thursday, May 31, 2018. (Photo by Gary Landers/WCPO)</p>

CINCINNATI -- In her beautifully rehabbed, 1890 row house in Northside, WCPO anchor Kristyn Hartman surrounds herself with pieces from around the country.

"I think your house should be an expression of where you've been," she said.

She has certainly been a few places during her 25-year career as a TV journalist. Before moving to Cincinnati and WCPO in April 2017, she lived and worked in six other cities: Joplin (Missouri), Peoria (Illinois), Phoenix, Charlotte, Chicago and Columbus.

Her decor includes a little something she picked up in each of those places -- with the exception of Joplin. There's a good reason for that, though.

"I was flat broke," she recalled. "I was eating PB&J and ramen noodles every single day."

There are reminders of the other places she has called home from the moment you step through her front door and into her living room, which boasts the striking exposed brick seen throughout much of the home. (You'll likely be greeted by her "four-legged child," an energetic golden retriever named Ginny Mae.)

A painting of the "L" tracks on Wells Street in Chicago represents both her hometown and her five years in Columbus, as it's by cityscape artist Ryan Orewiler of the Ohio capital. She also will soon have a cityscape of Cincinnati that Orewiler is creating for her.

Black-and-white photographs of Charlotte, each with a pop of color, show a street and her favorite church there. There are reminders of her travels, too, such as a row of bird prints from Charleston and another piece of art from Santa Fe.

Since her move here last year, Hartman said, she has had a lot of fun exploring Cincinnati. She ticked off a long list of things she loves about her new city: its history, hills, river, museums, parks (best explored with Ginny, of course), food scene and buildings.

"I really love walking through neighborhoods and checking out the architecture," she said. "You see those grand old homes and wonder who lived there."

There's something less tangible, too.

"I love the energy here," she said. "I think there's a real vibe in this city. It has a Chicago feel to me. Maybe that's why I feel so at home here."

The Cincinnati home she chose for herself and Ginny was one of many that Hartman toured.

"I looked at about 40 homes, in all different neighborhoods on both sides of the river," she said.

The Northside row house appealed to her for its walkable location and because it had the charm of an old building but was fully updated and move-in ready, thanks to a rehab by developer Michael Berry.

That renovation added the entire back of the house: The kitchen, where Hartman loves to bake, on the first floor; one bedroom each on the second and third floors; and a rooftop deck.

The third-floor bedroom and its attached deck were useful additions for Hartman's lifestyle. She uses the room as her master bedroom and, weather permitting, reads the news while she has her coffee on the deck before going to work each morning. The TV in her bedroom always has the news on, beginning at around 6 a.m.

If she hadn't been "terrible" at chemistry, she might not have ended up working in news. Growing up, she always wanted to be a doctor, but struggling through her high school chemistry class made her second-guess the prospect of a schedule full of college science courses. So she sat down with her guidance counselor and listed things she enjoyed: public speaking, current events, English.

He asked if she had ever considered journalism.

"The rest is history," she said.

Today, that history is subtly reflected within her home. Not all of the reminders are of good times: In one guest bedroom is a print that reads, "Every experience, no matter how bad it seems, holds within it a blessing of some kind. The goal is to find it." Hartman's doctors at the James Cancer Hospital in Columbus gave the print to her when she had breast cancer in 2015, and the sentiment spoke to her.

"It taught me a bunch of very valuable things," she said of her cancer. "It made me stop and evaluate how I was living my life. In a way, I'm grateful for it."

It seems that introspection is now part of her daily routine. Other quotes form a lighthearted "inspiration wall" near her back door, reminders such as, "Try not to suck."

"I put that there so I see it every day when I leave," she said.

If she went out the front door, she would see reminders that she definitely doesn't "suck" at her work. On the bookshelves that hold a Lego model of Frank Lloyd Wright's Robie House she put together and the presidential books and cookbooks she loves, you also will see her RTDNA Regional Edward R. Murrow Award, her four Ohio Valley NATAS Emmy Awards and her two Ohio Associated Press Awards.

In any case, she's happy to be going out the door to a job she's excited about at WCPO, where she anchors the 5 p.m., 5:30 p.m. and 7 p.m. news while also doing the reporting that she loves so much.

"I'm thrilled that they've given me the opportunity to really pursue stories," she said.