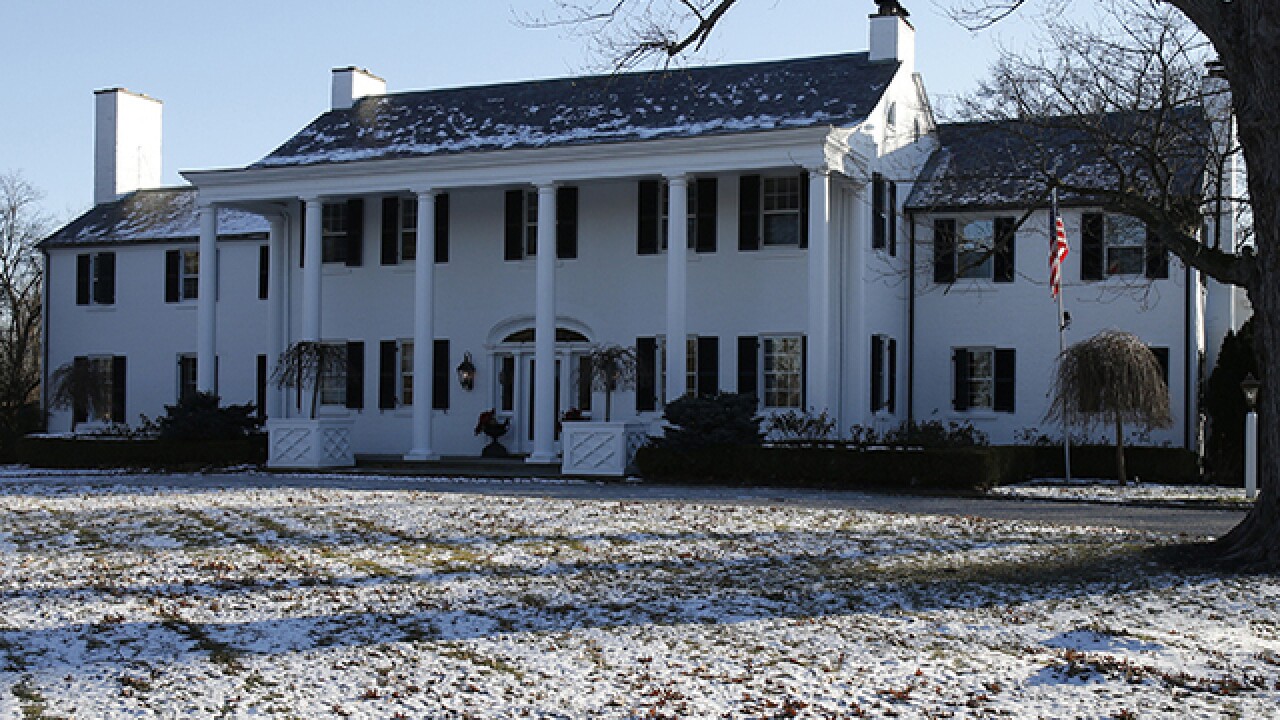 INDIAN HILL, Ohio -- The iconic Fairlea Estate has had numerous brushes with greatness in its 170-odd years. Elizabeth Taylor once slept in its upstairs Pink Room. The mother of pioneer road racer, America's Cup-winning skipper and Cincinnati native Briggs Cunningham II, lived there. Just last year, the 20,434-square-foot mansion was highlighted  in The New York Times.

Not bad for an abode that started as a modest brick farmhouse built way out in the woods in the 1840s.

Today, after several major modifications that started in the 1920s and ended in the '80s, Fairlea is one of the finest remaining examples of country living in Greater Cincinnati. The house retains its 19th-century style and elegance on the inside, and its 10.7-acre grounds are a paradise for large, outdoorsy families, especially those who enjoy swimming, tennis and horseback riding.

Fairlea got its name from Procter & Gamble vice president Stockton Busby in the '30s but started as the Wellridge Estate. James Given, who served as Hamilton County Engineer and is the namesake of a nearby road, began construction of his family house but left it for its second owner -- John Symmes Buckingham -- to finish. Records show the descendants of the pioneer Symmes family likely maintained Fairlea until 1925.

After that, it was owned by wealthy philanthropists, celebrated hostesses, a millionaire energy magnate and Cunningham's socialite mother, according to research done by Sotheby's Realtor Perrin March's staff. It has been under the care of allergist/immunologist Carter Bobbitt and his teacher wife, Jo Ann Bobbitt, since 1986.

The 7-bedroom, 8-bathroom mansion is partially empty now. Its two swimming pools, tennis court and six-stable barn are virtually unused, as is a substantial guest house at the end of the estate's long gravel driveway. Still, there was much to admire during our home tour.

The original entry hall staircase is an 18th-century masterpiece that's March said ranks among the best he has seen. Guests enter through a classic four-panel front door with the leaded sidelights and curved transom that were so popular back in the day (think Taft Museum). The black-and-white parquet floor is set at a dramatic 90-degree angle to the wall, and a careful eye will spot a modern, circular, in-floor HVAC register near the door leading to the west parlor.

You might also spot that a small cap is missing in the center of the newel post top, which indicated in the 19th century that the owners had paid off their mortgage. The intricate ceiling molding in the hall and other original rooms on the first floor are testament to the finest 19th-century craftsmanship available at the time.

The kitchen is an '80s classic that has stood the test of time. Its showcase is a wood-burning, brick fireplace completely surrounded by walnut cabinets and molding made by Flottemesch & Son of Madeira. A sign that reads "Fairlea" sits on the wooden mantel. The countertops are dark-stained butcher block, and the five-sided island with a small sink and built-in electric plate warmer is topped with granite. The eat-in area sits two steps above a side-entry hall that's divided by a half wall and wooden support columns. The view is open from the back of the kitchen to the vaulted conservatory.

The glass-ceilinged conservatory is the first room in a two-bedroom wing and basement space added by the Bobbits in 2006. It offers a breathtaking view of the patio lap pool they installed and a well-manicured garden that separates it from one of the oldest in-ground pools in Cincinnati (1927). Although it was covered when we visited, the pool floor features a colorful painted image of a mermaid commissioned in 1970 by then-owners Jay and Dorrie Thompson, according to March.

Red, white and blue carpeting covers the treads on the steps leading down from the conservatory to the basement where there's a pool room, a game room, a craft room and a large theater room with a wet bar and lighted cabinets still well-stocked with classic candy such as Juicy Fruit, Mike & Ike, Red Hots and Dots. The basement also features a tiled utility room with a dog bath and a large storage room.

The old but well-maintained barn, which includes a second-story apartment that March said some of the Bobbitt children used when it was time to move out of the house, includes a tack room, a hayloft and six stables. Although unused for years, three of the horse stable doors still bear the names of their last occupants: Terra Nova, Right Royal and Iron Curtain.

East and west wings were added to the original, boxy farmhouse in the '20s. The east-side rooms include a library that is all white with deeply carved, plaster molding, shelf upon shelf for books and a black slate fireplace and hearth. The room itself is as classic now as it was 90 years ago, but it's the view through its south-facing windows to the patio, garden, pool, tennis court and barn that awes March the most.

"This, to me, if you own the house, is what it's all about," March said. "You can stand here and look out and survey what is yours.

For more on Fairlea Estate, go online to perrinmarch.com .