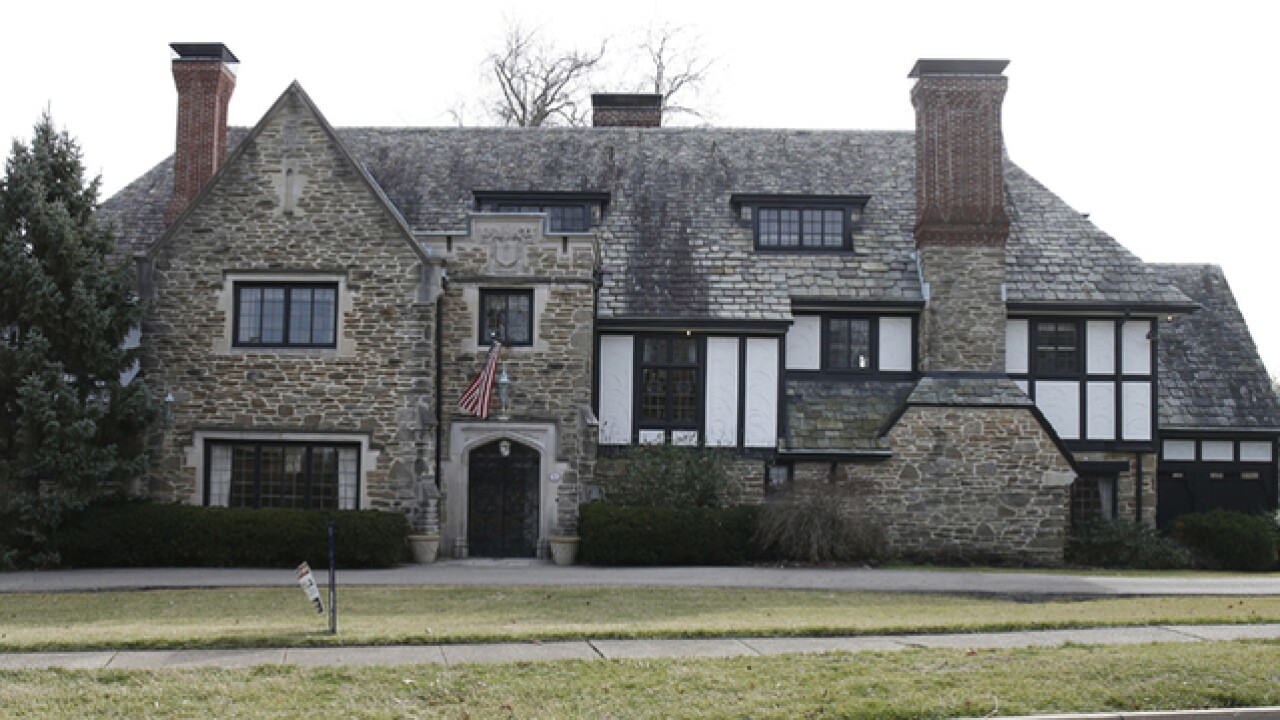 CINCINNATI -- I wish I had rented a tuxedo before touring 2555 Handasyde Ave., because it deserves a sharply dressed man.

My other wish was that I -- and a well-healed benefactor or two -- could pool together $1.89 million and buy the place. More realistic, however, is to describe what we saw during our two-hour tour.

The nearly 8,000-square-foot, 6-bedroom, 6½-bathroom house is located on one of Cincinnati's most prestigious streets, in Hyde Park. Speed bumps slow drivers as they approach its semicircular driveway and get their first look at its impressive stone and stucco facade, multi-colored Vermont slate roof and three steel-topped brick chimneys.

The strength of the architecture designed in 1923 by Cincinnatians G.C. Burroughs and John Henri Deeken (he of Ambleside, the former Indian Hill estate of Marge Schott) also is found in the little details: a hanging, front-door light fixture with a perfect green patina; an organic-themed double door made of swirling iron with a transom sporting a centered family crest; leaded casement windows framed by Tudor-style timbers; and decorated copper downspout boxes.

The details grow in number, but the high standard of materials remains the same inside the house. A builder would be hard-pressed to duplicate such craftsmanship in 2017, said listing Realtor Perrin March.

"Every window pull is polished brass, and look, that twisted handle matches the sconces and chandelier," March said as we entered the home's 250-square-foot foyer. It is, March said, one of the few Cincinnati homes he has seen with a fireplace in the foyer. Also rare is the padded iron bench that frames the hearth.

The vertical handrail March mentioned is in the Tudor-style arch where two steps lead to the living room, to be used, perhaps, by someone with more than one champagne glass in hand. Other foyer details not to miss are the under-staircase powder room and twisted, wooden spindles that serve as grates to an adjacent steam-heat radiator.

Warm wood in geometric shapes is the theme of the living room, which is to the right of the foyer. All original, it covers the paneled ceiling and surrounds the stone fireplace. Flanking the fireplace are two more sconces and narrow bands of darker, hand-carved wood that run across built-in cupboards. The fireplace's screen and intricately shaped Arts & Crafts andirons are original to the 94-year-old house as well, March said.

Just beyond and to the right of the foyer fireplace, a short hall leads through French doors to what March called the card room. Painted blue with white framing on the walls, it has a second set of French doors that lead to the back porch.

"This room kills me. I love this room," March said. "The owner decorated it to look kind of like an Ernest Hemingway-type room."

To the left of the foyer through yet another set of crested French doors is a formal parlor. Its white walls are trimmed with delicate frames painted a dark cream like the double ceiling molding, and a padded bench over heat radiators spans three leaded casement windows. Brass sconces and a central chandelier add traditional touches to the room.

A fourth entertaining space branching off the foyer is the dining room, which features a green, yellow and white color scheme and original wood-trimmed casement windows.

Beyond it in the east wing of the ground level are a butler's pantry, the kitchen, the laundry room, a full bathroom and a large bonus room that March said likely was designed to be an apartment for a chauffeur.

The highlights of the east wing include a terracotta tile floor and in-cabinet vintage, Frigidaire refrigerator-freezer in the pantry, a vaulted skylight in the kitchen, a 160-square-foot laundry room and stairs that lead from the driver's quarters directly into the garage.

The kitchen, which March said was remodeled in the 1970s, likely will require a complete makeover by the home's next owners. The rest of the wing, he said, could be converted into an apartment for grandparents or a renter, or it could be used as a recreation, play or TV room.

The home's six bedrooms are all upstairs. The carpeted master suite is 21 feet by 17 feet with two walk-in closets and a step-down boudoir with white interior shutters over a window. A privacy door closes the suite off from the main second-floor hallway. Built into its wall is the house's defunct but original eight-buzzer call station.