Home Tour: If you don't want a stunning view in every direction, The Ascent is not for you 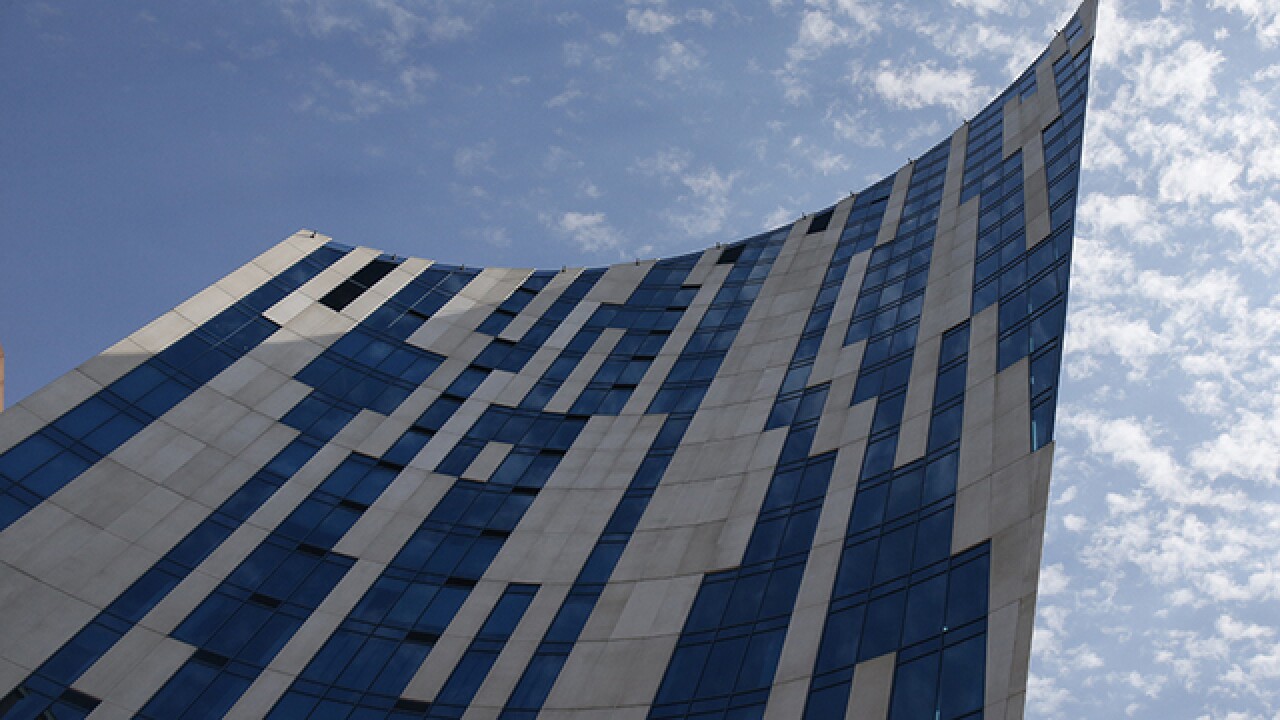 COVINGTON, Ky. -- You can't get away from the view in Brian and Amber Braithwaite's condo on the 16th floor of The Ascent at Roebling's Bridge.

Every room in the three-bedroom, four-bath condo offers a bird's-eye glimpse of Cincinnati and Northern Kentucky. Walking through the front door, your eyes are drawn to floor-length windows leading out to a patio, as well as a bank of glass behind the wide kitchen counters. Two walls of custom shelving in the office seem to exist merely to frame a window in the end wall of the office. The Braithwaites can lie in bed in their master suite and watch fireworks over the Ohio River.

Maximizing sightlines was a major priority for the Braithwaites' complete renovation of the unit, and the condo has a nearly 360-degree view of Cincinnati and Northern Kentucky.

The Braithwaites have lived in The Ascent for 18 months. Nine of those were spent under construction.

Originally two units, the 3,800-square-foot condo felt closed off and a little dated when they moved in, Amber Braithwaite said. Small windows didn't make the most of the its perch above the Roebling, and the decade-old design was too stark for Amber's taste. Brian liked the modern design, but he agreed about the need to update and open up the space.

They hired Jeff Ross of Turnkey Custom Trim to handle the construction and found designer Amy Holt, owner of Designs on Madison, to help them find a happy medium between their visions for the home. Holt landed on a transitional design that blended modern design -- clean lines, an all-white kitchen -- with traditional elements, like a deep, comfortable sofa and coffered ceilings.

"The building leans so contemporary, and he preferred that. She wanted more traditional. This was a style that brought those two things together," Holt said.

This was the first time the Braithwaites had worked with a designer, but Amber said they probably always will use one in the future.

"She brought in things I never would have found or tried. She could see the spaces better than I could," Braithwaite said. "She also was an intermediary between Brian and me."

"That happens on almost every project, especially now with Pinterest and Houzz," Holt said. "People see these ideas -- making it all work together is my job."

The key is figuring out what's most important to each person and making sure they get it, Holt said. Brian wanted state-of-the-art electronics and home entertainment system; Amber wanted a comfortable, beautiful home.

A built-in iPad controls everything in the condo, including the dazzling light fixtures Amber loves and a home entertainment system hidden behind the traditional wainscoting.

Still, not everything was easy. The concrete construction meant some things -- electrical, plumbing and even some walls -- just couldn't change. Many of the Braithwaites' original plans had to be adjusted.

In the end, many of the "problems" feel like features. A concrete wall blocked plans for a walk-in pantry -- but the pantry the Braithwaites got is double-wide and shallow, which means you'll never lose a can in the dark reaches of a shelf, and refrigerated drawers under the kitchen island keep drinks handy.

When the laundry room had to move because of utility locations, they ended up with a full-size washer and dryer and extra storage space tucked behind a hidden door -- it looks like a shelving unit -- in a bathroom.

"This was the most challenging remodel I had ever done," Holt said. "We figured it all out. It took a lot of brainstorming, but we made it work."

The finished condo is a quiet, comfortable home base for the couple, who both work in the medical field. They can walk to Downtown and restaurants in Covington and Newport. They can use all the amenities in The Ascent, including a fitness center, sauna and steam rooms, guest apartments, and private theater and event spaces. Amber Braithwaite loves sitting with a cup of coffee at the massive kitchen island, where she can catch up on the news or enjoy the view of Downtown.

Still, the Braithwaites have decided to sell. Condo living, even with a perfectly designed space and spectacular views, isn't ideal for their two dogs: 4-year-old English black lab Mase and 9-year-old yellow lab Maddux. The condo is listed at $2.62 million.

"I'm not really ready to leave," Amber Braithwaite said, looking out the kitchen windows. "It's just not the right space for us right now."