You can tour it, 11 others, with Beyond the Curb 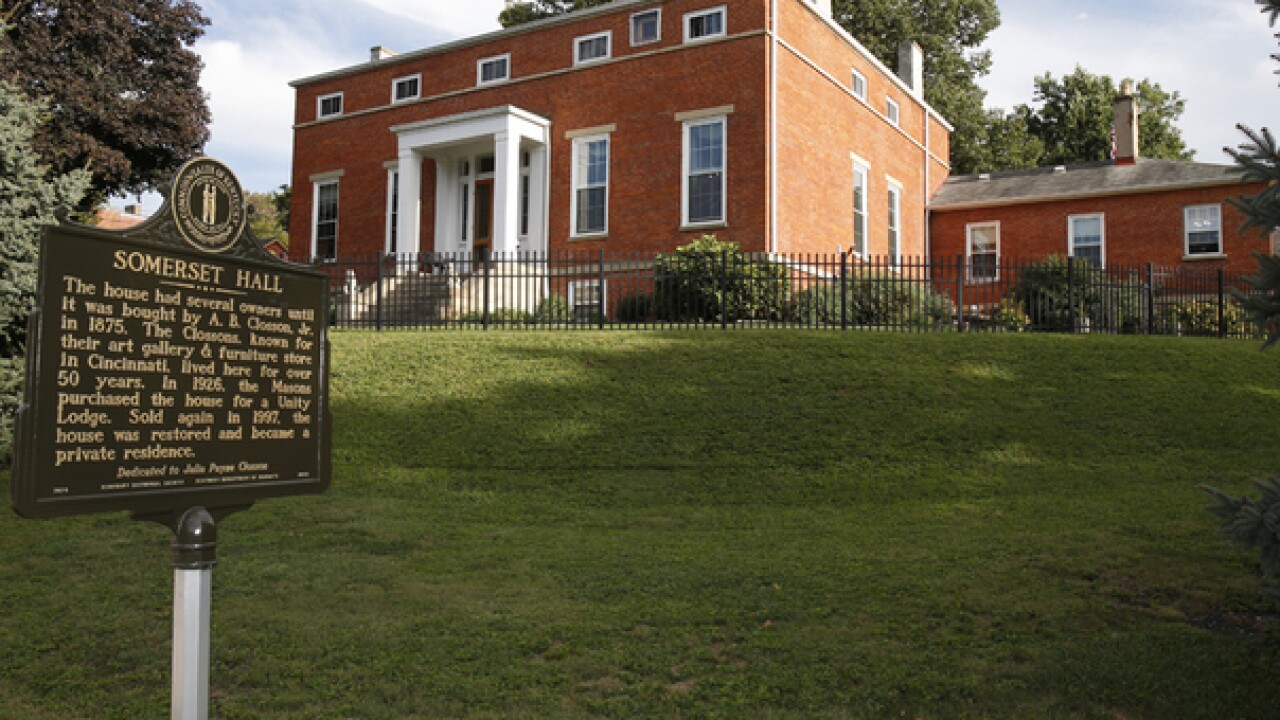 LUDLOW, Ky. -- Wes and Laura Dorger believe they are part of the first phase of a rebirth of their Northern Kentucky river town of Ludlow, and they're opening their historic home to the public on Oct. 9 as proof.

That's the day of Beyond the Curb, a tour of 12 Ludlow homes sponsored by the Catalytic Fund that's designed to show people the housing potential in Northern Kentucky's urban communities. Previous tours featured Covington, Bellevue and Dayton.

The Dorgers agreed to be a part of the tour when its coordinator, Tara Johnson of Catalytic Fund, visited and fell in love with how they've converted the 6,436-square-foot historical house -- known as Somerset Hall, the Kenner-Closson House or the Masonic Lodge -- into a comfortable home for their children: 10-year-old Quinn, 8-year-old Ruby, and 3-year-old Dash.

The Dorgers love their neighborhood as much as their home. (She's a lifelong Ludlow resident, he moved there at age 9, they've known each other since their Ludlow High School days, and they've been married for 11 years.) They are a short walk away from Ludlow's downtown shops and restaurants as well as a public swimming pool and ball fields, where dozens of children chase balls and swing from monkey bars in the summertime until dusk.

With its affordable stock of homes, many more than 100 years old, and its location a seven-minute drive from downtown Cincinnati, Ludlow is beginning to draw younger, artistic residents who have been priced out of other urban hot spots, Wes said.

"I think it's untapped, not like the other river communities that have done their thing: Covington, Newport, Bellevue," he said. "Really, it's crazy. It's such a cheap place to live."

Wes and Laura credit her parents, Stephen and Paula Chapman, for the old brick (the walls are three courses thick) Georgian-style house being what it is today. In 1997, the Chapmans rescued and remodeled what had been a Masonic lodge for more than 70 years. Among other improvements, the Chapmans reconfigured the space to make it a home again, overhauled and restored the interior, and landscaped the yard, creating an Alice in Wonderland garden and erecting a teepee clubhouse for their grandchildren.

Laura, who owns D-Zyns by Laura hair salon a few blocks away and is a champion of modern décor, said they've modified her parents' elegant style by bringing in new and salvaged furnishings as well as brightly colored chairs, artwork and accent pieces. Wes, a veteran pipefitter and construction project manager, built numerous pieces of furniture for the house as well.

We toured the first level of the home, leaving the four bedrooms upstairs to be discovered by those who take the Beyond the Curb tour on Sunday. Here are some of the highlights:

The 48-by-20-foot living room reflects the couple's new-with-old design style that Laura calls "funky cool." The living room has the same towering 13-foot, 9-inch ceilings trimmed with original intricate egg-and-dart molding as the north and south entry halls. It is dominated by two 13-foot-long distressed leather couches that the Dorgers bought for $2,000 apiece after seeing similar ones at Braxton Brewery in Covington.

The couches face each other in the center of the room. In between them is an 8-foot-long coffee table Wes crafted from thick planks of old wood he salvaged from their previous home -- a 90-year-old apartment building -- and brushed L-shaped tube-steel legs he designed and forged.

"It's an ungodly large coffee table, but not in this room. It gets swallowed up in this room as large as it is," Wes said.

At the north end of the 960-square-foot room are two library-shelving units that hold dozens of children's books. The Dorgers bought the shelves from Building Value in Northside, which had salvaged them from the Cincinnati Museum Center.

There's old stuff in the room as well, including an iron safe that reads "Unity Lodge 478." Wes said the safe is so heavy it took three hours to move 15 feet from the north-end hallway. "I want people to know it's empty," he joked.

The porch and entry

Among the dozen or so images of the house hanging on the walls is a black-and-white photograph of its south side, which originally was the back of the house but now is used as the front. In the photo is a red oak sapling that has grown to be 16 feet in circumference at its base and supports two rope swings, one with a plastic seat, the other with an old tire.

That old oak is located near central steps that lead down from what is considered to be the widest -- 116 feet -- covered porch in the Commonwealth of Kentucky.

"This porch," Laura said, "gets constant use in the summer because we have these ceiling fans that make the air move." The large, fenced-in lawn it faces, Wes said, became the scene of a kids vs. parents soccer game that broke out during their Fourth of July party.

Visitors park in a carport on a side street called Ringgold -- the house is on a one-block, dead-end street named Closson, just off Kenner Street (see history notes below) -- and enter the south side of the house into a broad hall with a staircase that leads to the second-floor bedrooms. Originally, the staircase ascended straight up from the north hall, but sometime in the late 1800s -- likely when the front door became the back door -- the first run of steps was moved 180 degrees (nail holes in the original pine floors remain as evidence of this change).

The dining room and kitchen

The Chapmans re-floored these two west-side rooms with hardwood, and remodeled part of the kitchen, keeping the Masons' 10-burner gas stove and double oven and built-in, floor-to-ceiling beadboard cabinet. But they added a long, lower cabinet plucked from an old store years ago that they bought at Burlington Antiques Show.

An unrealistically colored painting of a cow's head over the stove brings "new" to the kitchen. Laura said she and Dash found it while shopping in a big-box store.

"Dash saw it, and he named it 'Bussy,'" Laura said. "He really, really wanted it, so we bought it, and it's perfect."

The dining room is another example of how the Dorgers blended old with new. Its table top sits on legs that are chopped-down pillars salvaged from what used to be the front portico. A rocker salvaged from Unity Lodge sits in one corner. Wes took an old, massive hutch that was built by his stepfather's father and replaced the glass with stamped metal. Across the dining room from it is another modern touch: a grouping of multi-colored Warhol-esque portraits of the Dorger children.

This is definitely Wes' room. The pool table sits in the center, but visitors' eyes will be drawn to the front end of a Jeep sitting against the north wall. Its headlamps work, and it came from Bargains & Buyouts in Glenway Crossing. The high ceilings provide more than enough room for posters Wes got at 16 Wilco concerts he has attended over the years. The room also includes a large, green chalkboard the Dorgers bought for their children at Building Value.

What's old in the billiards room is a half-barrel-shaped liquor cabinet on the wall that was Laura's grandfather's. When the family first opened it, they found a bottle of prized Pappy Van Winkle bourbon, which the Chapmans sold for $1,200 through the Cincinnati-based online auction company Everything But the House.

All in the family

Being the of the second generation of Chapmans to live in the house is a point of pride for Laura, who said, "We plan to be here a very, very long time, and I hope to keep it in the family."

Until it's time to pass the torch, Wes said, he expects to take in more stuff. To friends and family who have furniture they don't want, he said not to hesitate to bring it by, because there's still plenty of room in the house.

"You're not going to crowd it. If you like that chair, just get it and we'll find a corner for it," he said.

Folks in Ludlow have two names for the house: Somerset Hall and the Kenner-Closson House. Here's why:

Wealthy Louisiana plantation owner William Butler Kenner (1810-1853) used slave labor to build it around 1845, according to the Encyclopedia of Northern Kentucky.

"It's so well built because of slave labor," said Wes, who imagined a scenario in which Kenner might have said "Is this thick enough? Probably. But make it thicker."

Called Somerset, it was the Kenner family's summer home for seven years. Kenner, nearly broke because of poor business decisions he made, sold the home in 1852. He and a son died of yellow fever the next year. The Louisiana town named after his family is the site of the Louis Armstrong New Orleans International Airport.

Famed hot-air balloonist and Cincinnati jeweler Richard Clayton owned the house from 1854 to 1862. The family of A.B. Closson, a partner in Closson's Art & Home Furnishings company in Cincinnati, lived in the house from 1875 until 1925, when they sold it to the Masons, who used it as their headquarters for 71 years before Laura's parents bought it and converted it back into a single-family home in 1997.

Advance tickets for Sunday's 12-house tour cost $15 at beyondthecurb.org/tours/tickets. They will cost $20 at 301 Elm. St., Ludlow, on the day of the tour.