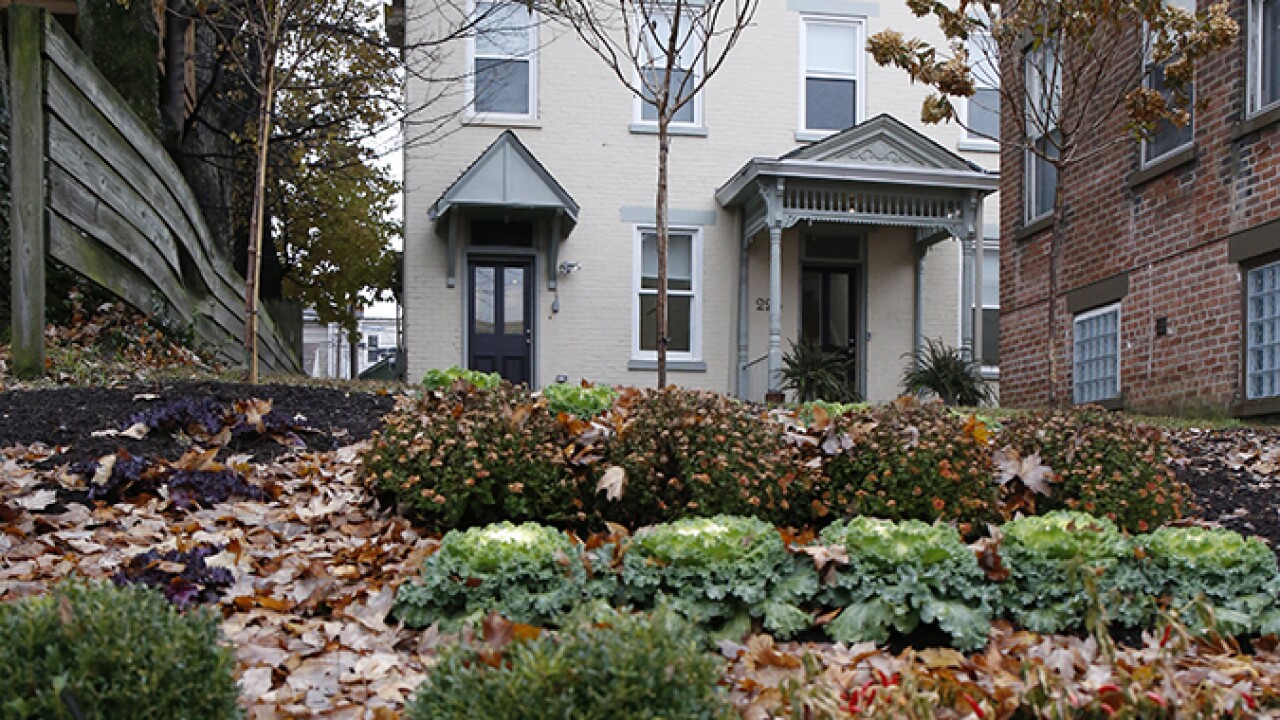 LUDLOW, Ky. — Elizabeth Lyon made her first map when she was 12 years old and living in Uganda.

So it might not come as a surprise that the Chicago native grew up to become a geographer for the federal government or that her Ludlow home is full of little touches that reflect her world travels.

Lyon’s concerns during the renovation were of a much more local nature. Her home dates to some time between 1868 and 1883, and it may be the oldest surviving residence on its street. Lyon wanted to preserve as much of that history as possible when converting the home from a multifamily back into a single-family residence.

“We did a lot of renovations, but we kept the footprint pretty original,” she said. “I wanted to keep the original footprint of the house just to highlight its story.”

Click here to view a gallery of Lyon's home

The story, which Lyon traced with the help of the Ludlow Historical Society and her aunt-slash-general contractor, Joy Amann, begins with German immigrants Nicholas and Elizabeth Grimmeisen. They purchased a lot in Ludlow in 1868 and built what are now the front rooms of Lyon’s house, where they raised their family. (At that time, the house was just two rooms downstairs and two rooms upstairs, Lyon said.)

In the mid-1880s, the family built a bridle and saddle shop in front of the home. The deep front yard was also filled with gardens and an urban orchard.

Two more rooms were added at different times in the late 1800s, Lyon said. The home’s back two rooms, the only parts of the house that are not solid brick, date to sometime between the 1950s and 1970s.

All those additions add up to approximately 2,000 square feet.

Lyon bought the house in 2017 and began the work of converting it back to a single-family home, which now has three bedrooms and 3 1/2 baths.

“It was about making (the house) be what it’s supposed to be,” she said of the renovations, which included removing a second entrance in back.

That also meant working with what was already there. For example, the house has original floors, but with all those years of wear, some places needed to be patched. When they came across an existing tin-can patch in one of the rooms, they decided to leave it. And it sparked an idea: To patch the smaller holes with coins from places Lyon has visited.

“When the kids in my life come over, they go on treasure hunts,” she said.

On a wood patch in the kitchen, Amann painted a compass rose, a nod to Lyon’s work and travels.

“I love it with all my heart,” she said of the adornment.

Lyon wanted her first-floor master suite to be accessible so that her mother, who uses a wheelchair, would have a place to stay when she visits. In addition to an accessible shower in the bathroom and wider doorways between the bedroom, dressing room and bathroom, the suite also has a little library reading nook where Lyon can read and relax.

Sprinkled throughout the rooms are items that reflect travel: African masks in the living room and French accents (Lyon was a French major) in the “music map room,” where she plans to add a piano. Wallpaper that says “hello” in various languages covers one wall in the living room and conceals a hidden door to the basement.

When looking for furniture, Lyon went bargain hunting for standout pieces at places like Bargains and Buyouts and Value City Furniture.

“I’m furnishing a house from start to finish,” she said. “I wanted to tell the house’s story and be design-forward, but in an affordable way.

“I had the luxury of time in this case,” she added. “It allowed us to be more creative and find things.”

Having Amann’s help was also critical, she said.

“She deserves all of the props,” Lyon said.

“We collaborate a lot,” she added. “We pore over design magazines together.”

For example, when Lyon found some colorful fabric she liked, her aunt made pillows from it.

In the kitchen, they took an unusual approach to achieving Lyon’s goals.

“Whenever people are in my home, we’re always in the kitchen,” she said. “What I wanted was a clean line.”

That meant no upper cabinets but also no standard-sized refrigerator. Instead, a “butler’s pantry” room behind the kitchen holds the refrigerator and a prep area.

“Of course, I totally blinged it out,” Lyon said of the space, which has dark green cabinets, a crystal wall mount light and a flush mount crystal ceiling fixture. “One of our design inspirations is Dorothy Draper.”

Upstairs, Lyon created nearly mirrored bedrooms, each with a bathroom and closet.

Outside, she fenced in the backyard and added a wheelchair ramp. She’s working on a heritage garden in front, a reference to Hygeia, the health-focused town that was planned for what’s now Ludlow. Although Hygeia never got off the ground, it’s inspiring Lyon’s garden all these years later.

“The intent was to mimic the Hygeia map and nod back to that time,” she said.

Beyond the history and the updates she’s made to reflect her own personality and style, Lyon also loves the house’s proximity to the river and that it’s in an urban environment with an artistic community, she said.

“I’ve been talking about buying a house in Ludlow for 15 years,” Lyon said.

It started when two of her cousins moved to Ludlow.

“My mom and her siblings raised us so that all of us cousins were really close,” she said.

And her best friend and godchildren live just across the river.

“I love this area,” she said. “I love to be near my family. It was a combination of everything that matters to me.”