Home Tour: Elm Street Italianate-style in OTR is a little bit like being dropped into the Land of Oz 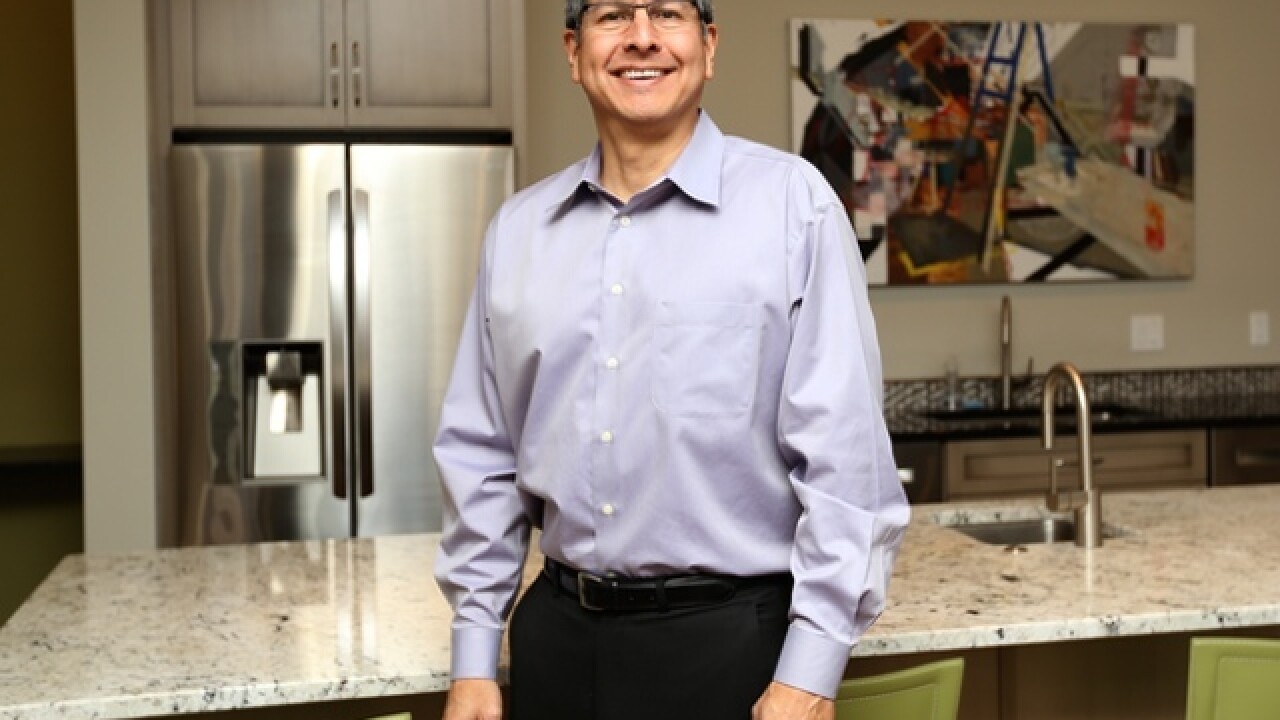 Emily Maxwell | WCPO
<p>The front part of the house is one big room that contains the kitchen, dining and living rooms. Owner Paul Gaitan says the open area is one of his favorite spots in his new home.</p>

CINCINNATI -- Visitors who have stepped into Paul Gaitan’s Italianate-style home in Over-the-Rhine, he said, remind him of an amazed Dorothy when she dropped from a sepia-toned sky into the Technicolor land of Oz.

Gaitan’s three-story house on Elm Street looks a lot like its late 19th-century neighbors. Its weathered brick looks old and its stone window sills and caps compare to those on the neighborhood’s hundreds of 130-year-old Italianates.

It makes a nice black and white photograph and creates a specific expectation for what’s inside: a staircase immediately to the right off the entry hall, a front parlor to the left that leads into a secondary parlor with a door in the back that opens to the kitchen. There should be tons of natural wood trim, pocket doors and chandeliers.

The surprise guests get is wizardly: An open-concept, contemporary space with all-modern amenities that’s brightened by pot cans in the ceiling. And they probably didn’t know they were in an all-new house Gaitan expects soon will meet the silver level requirements for LEED (Leadership in Energy and Environmental Design ) established by the U.S. Green Building Council.

“People are amazed. They never thought they’d see something like this in Cincinnati,” Gaitan said. “It’s probably been five decades since new single-family construction went up in Over-the-Rhine.”

Going green, Gaitan said, “is a relatively transparent process if you have a builder to keep you away from making building decisions as far as LEED scoring goes … A huge part of it is getting a builder who knows his way around so you don’t get materials from thousands of miles away.

Gaitan, a Southern California native who is a chief financial officer for a local manufacturing company, and his now ex-wife moved to West Chester Township with their two boys in 2007. They started exploring the idea of moving into the city as their empty nest years approached.

They considered condominiums developed by 3CDC but settled on new construction. Paramount was finding a lot close to the Gateway District, backed up to an alley so they could have a garage and not have to scrape their car windows in winter.

What looked like a long-neglected empty lot on Elm Street delivered. The doctor’s office of Joseph Kallenberg once sat on the lot, and Gaitan bought it from the late general practitioner's wife Helene shortly before her death at age 95 in 2013.

Gaitan chose Hueber, whom he had met through his contacts at 3CDC, and Myers because of their reputations and got a bonus in Gates with whom he made interior design, material and color decisions.

The house isn’t 100 percent complete – there’s more color-splashed artwork by Manifest Gallery artist-in-residence Taylor Woolwine to hang and a basement to finish – but the sleek looking space was done enough for Gaitan to share it during the first OTR Holiday Home Tour.

The front part of the house basically is one big room. During the home tour, Gaitan said, “I stand here and give people my 30-second spiel and explain that this is new construction. They were amazed with the volume of space in here.”

The living room features three windows with privacy shades that Gaitan keeps halfway down so he can see out onto Elm Street.

“To me, it’s part of trying to stay connected to the neighborhood,” he said.

The living room has a gas fireplace that earned LEED points for having an electronic ignition. In one corner, Gaitan put in a dark granite wet bar that helps keep people out of the kitchen during parties.

The room’s most striking architectural detail is the two-step molding that winds around the ceiling and casts dramatic shadows in certain light.

“It reminds me of water lapping on a beach of lake,” Gaitan said. “To me, it’s calming.”

Behind the living room is a kitchen with an 11-foot-long island of veined white granite. It separates the cooking area from the spartan dining room, with its 10-seat, richly stained table made locally by Algin Retro Furniture using reclaimed ash planks.

A flat screen television is embedded in the wall at the far end of the table, but soon it will be covered with a painting by Woolwine. Gaitan said the TV is for special events only.

“This area really was designed for people to interact with each other not be distracted by a TV,” Gaitan said. The only other set in the house is a 65-incher in the second-floor family room.

The kitchen’s most-dramatic feature is a backsplash whose material Gates sold to Gaitan without showing alternatives. It is made of a mix of shiny, matte, dimpled and flat tiles that run in a 5-inch row above a long dark granite countertop, turn the corner and then rise up above the invisible stove top.

The first choice Gaitan made for the décor was the kitchen cabinetry. It established the room’s contemporary look and silver, black and white color scheme. Made by Omega, the Shaker-inspired cabinets are glazed gray.

Beyond the kitchen is a wide hallway with eight doors that lead to a ¾-bathroom, a “flex room” with bathroom and shower, the garage, a storage closet, a grilling patio and a future dog walk and storage closet.

To the right at the top of the stairs (the ceilings drop from 10 to nine feet) is the laundry room and master suite. It features two walk-in closets and a cavernous walk-in shower brightened by a window that steals light from the stairwell.

The shower is one of Gaitan’s favorite features in the house.

“I love the openness, the echoing of the water hitting the tile. It’s calming in the morning,” he said.

Some people on the home tour, however, were alarmed that they could peak through the window into the shower.

“If too many people complain, I just tell them to avert their eye,” he joked.

At the back end of the second floor is Gaitan’s “Halloweeny” family room. It’s walls are a pumpkiny-mustard color and the furnishings are charcoal, hence the spooky connection to All Hallow’s Eve.

Off the family room is a 20-foot by 25-foot patio that features a 10-column cedar pergola and mortar-free synthetic tiles that allow rain to flow through to a membrane and out to a gutter of the back of the garage.

Like in old Italianate homes, the ceilings drop again on the top floor – to eight feet. There are two bedrooms there, one for each of Gaitan’s sons. He chose scarlet and gray bedding for his Ohio State son and purple and gold for his University of Washington son.

Once his sons stop visiting on a regular basis, Gaitan said he will consider sharing his home through Airbnb.com property renting service. He said he knows from personal experience – having his parents visit – that people would fall in love with Over-the-Rhine and add their positive energy to the mix if they had a chance to stay there for a while.

He said his parents were so smitten with it, they purchased two properties to rehabilitate.

This is part of the series, called Home Tour, where WCPO contributor Brent Coleman opens the front door to historic, unique, luxurious or just darned interesting homes in the Tri-State. Join him on the tour every Friday.