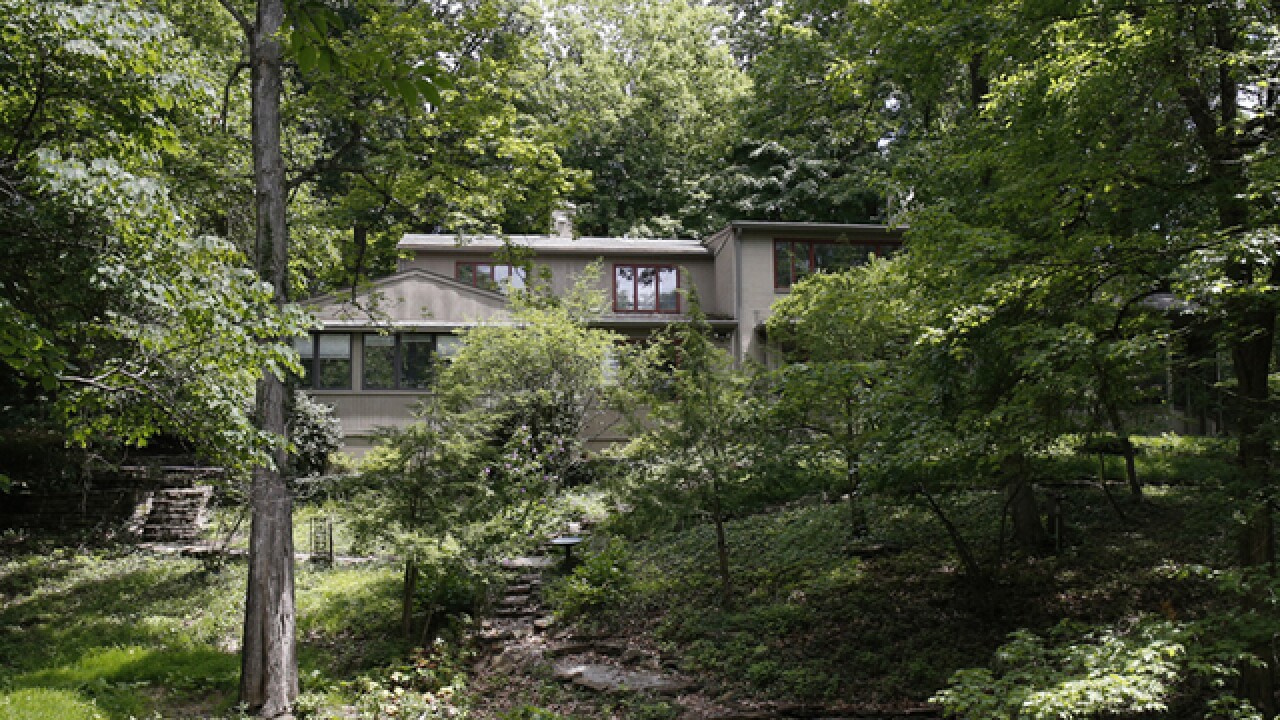 Gary Landers
<p>The glade behind Dick and Mary Lou Aft's 1940 home in Clifton was originally covered in wildflowers. The Afts added a stone path and some landscaping but left it relatively untouched. (Gary Landers for WCPO)</p>

CINCINNATI — Dick and Mary Lu Aft’s woodsy 1940 home in the Clifton gaslight district has an unmistakable aura of goodness: futuristic design by premier architects as well as occupants who have worked for the good of the community during all of its 76 years.

If the house could talk, it would have more than a few good stories to tell, like the one about the Afts discovering it in 1987, the year the two moved from Memphis to Cincinnati.

Mary Lu has worked as a volunteer with the Friends of the Public Library of Cincinnati and Hamilton County for 28 years, and Dick, who is retired, came here to be president of the local chapter of the United Way. One of the first two people he befriended was Daniel Ransohoff, the late University of Cincinnati professor and Clifton resident known for his urban photography and for being a pioneer in the city’s guided-tour industry.

Ransohoff had heard that UC philosophy professor and department head Van Meter Ames and his wife, Betty, who founded the Clifton Senior Center and Clifton Town Hall, were getting ready to sell their home — a natural light-splashed, 4-bedroom, 4-bathroom home designed by renowned International Style architect John Becker and his partner, Hubert Garriott.

Dick recalls that Ransohoff insisted the two of them drop in unannounced for a peek at the Ames’ place.

“He just went right up and knocked on the door and said ‘Betty, we want to look at your house,’” Dick said. “I walked in and saw the place — we’d had a mid-century house in Memphis — and I said to Betty, ‘Call your agent to see if I could have 48 hours to get my wife’s permission to buy it.’ I was overwhelmed with the setting, with the architecture and the potential for this to be a very happy home.”

The Afts had considered buying other homes in Clifton, as well as Hyde Park and North Avondale. They were concerned the Ameses’ house was too modern, but Ransohoff encouraged them, saying they’d be the hippest couple in town if they bought it, Dick said.

It has been their happy home for 30 years. Now, though, with their three sons grown and moved away, they have purchased a smaller landominium nearby and have found a buyer for the Ames-Aft house, which had been on the market for $625,000.

The Ames-Aft House is hidden down a long driveway at the west end of Warren Street. It sits on a hillside overlooking a glade of trees with a run at the bottom. A path the Afts added descends from the back of the house to a foot bridge that crosses the run, which sometimes rises to 4 feet in depth.

In the Ameses’ day, the glade would be bursting with wildflowers and was said to be the Zen garden envisioned by Van Meter, who was a pioneer in the study of Zen Buddhism and welcomed many a philosopher, poet, artist, musician and dancer from around the world into the home, many times for overnight or extended stays.

Sitting at a window-side table in the expanded kitchen that they and builder Rick Williams made sure blended with Becker and Garriott’s style, the Afts rattled off names of famous folks who attended the many events held in the house.

“They had a lot of soirees in this house,” Dick said of the Ameses. “It was the party place,” he said, one where intellectuals could eat, drink and talk amid shelves of books and serene views.

Guests are met immediately with the sense of being in the trees as they approach the house from the outside and as they step down the angled entry-hall stairs. The stairs funnel them through a 500-square-foot open space for cooking, eating and relaxing toward windows at the back of the house that provide a perched, west-facing view of the 1-acre property.

Signature design touches that the Afts specifically attribute to Becker greet the eye immediately. Among them are prow-shaped windows that, as the story goes, were inspired by the front end of the Vine-Burnet streetcar of old. That shape is picked up by shelves built in beneath a chevron-shaped bay window and the stone fireplace hearth in the living room.

Other prominent Becker signatures are parquet wood floors, the lack of ceiling molding and frames around doors and windows, the half-round pulls and cut-out handles on wood-slab doors, as well as outdoor porches (two have been filled in) from which to take in the same nature the house’s many big windows bring inside.

Renovation: Six months on the side

The Afts 15 years ago had Williams cover and screen in the 25-by-18-foot terrace off the southwest corner of the house in order to keep the bees out, Mary Lu Aft said. They added cabinetry, a storage chest, a sink and four skylights to create a comfortable, three-season outdoor living space.

They also built a room off the back of the garage at the same depth as the expanded kitchen. The room is located conveniently off the kitchen and is filled with a current swimming pool, a hot tub, exercise equipment and a bathroom with a shower.

Another major change to the house was made upstairs, where there are three bedrooms, two bathrooms and a laundry room. The Afts had Williams build a master bedroom suite out of a porch and bedroom, bringing the space up to modern expectations. The fourth bedroom and a full bathroom are located in the partially finished basement.

Also upstairs, at the opposite end of the house from the master suite, the Afts converted a bedroom to a library with prow corner windows, adding more wooden bookshelves than most people could fill. They removed a closet door and converted it to more shelving, a change that can be reversed to make it a bedroom again. They kept the room’s prow-shaped deck.

The Afts said that Williams worked after hours for six moths to remodel their house and was onboard with keeping its new materials and architectural changes in line with the house’s established mid-century bones.

“Becker would be proud that we retained his integrity,” Dick said.

The architect — who married into the Rombauer family that wrote “The Joy of Cooking” and helped edit it as his career wound down — might feel right at home chatting intellectually with the Afts in a space he didn’t imagine: the window table in the added kitchen space.

“I love to sit here and look out and eat and drink coffee,” Dick said.

We’ll miss the spring,” Mary Lu added as she gazed out on the backyard that was overgrown with a “million honeysuckles” when she and her husband of 55 years moved in 29 years ago. “And it’s so colorful in the fall.”