Thomson Park used to be owned by Champion Paper 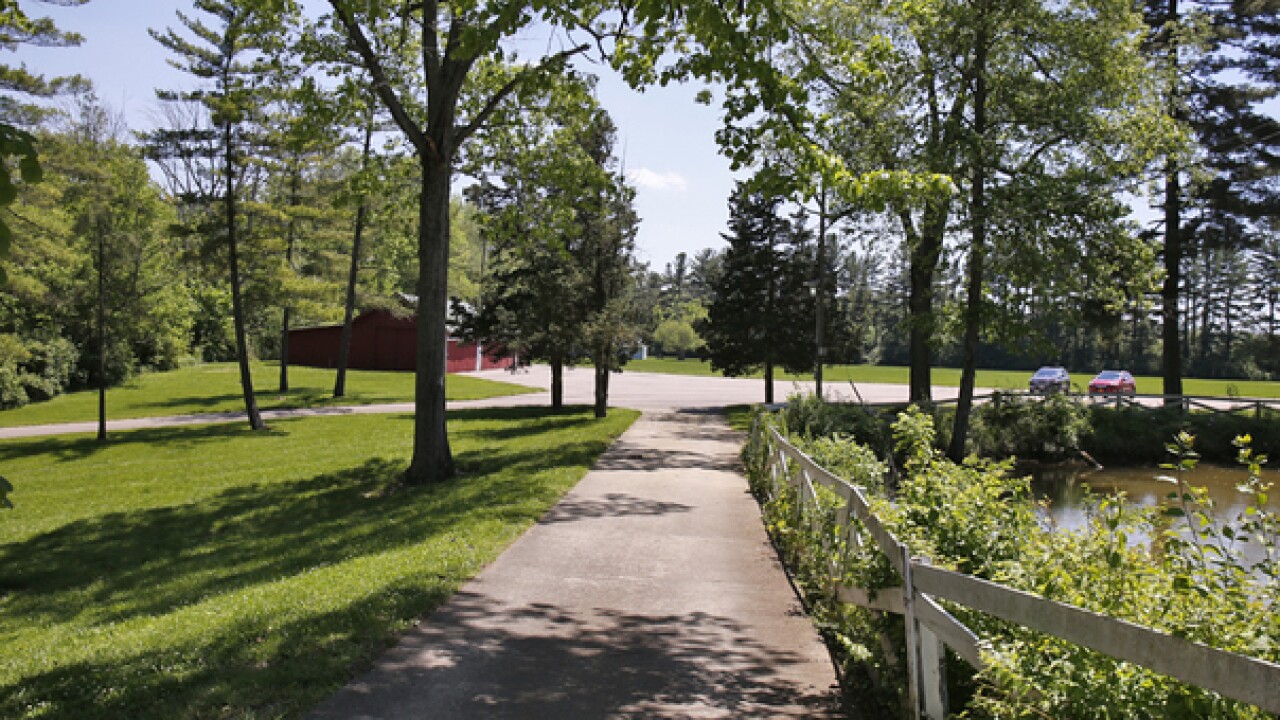 Copyright 2017 Scripps Media, Inc. All rights reserved. This material may not be published, broadcast, rewritten, or redistributed.
Gary Landers | WCPO contributor
<p>A walkway, photographed at Thomson Park in Butler County's Hanover Township, on Tuesday, May 16, 2017. The park is owned by the preacher and gospel singer Bobby Grove.</p>

HANOVER TOWNSHIP, Ohio -- Fair warning: What you are about to read is not our typical Home Tour story.

It's a piece about a Butler County landmark owned by a revivalist reverend and retired gospel singer who is looking for a savior of sorts -- an upright buyer of a bucolic, 46-acre property that once hosted Champion Paper Company picnics, overnight campers and top-notch softball tournaments.

The Landmark is Thomson Park, which is located about halfway between Hamilton and Oxford on Ohio 177 (Hamilton Richmond Road). The seller is the Rev. Bobby Grove, who at 85 is abandoning his dream of leading a successful Christian ministry on the land after about a dozen years of off-and-on attempts.

And, yes, there is a house involved: a 2,544-square-foot, lightly remodeled ranch with a large kitchen, master-bedroom suite, spacious mud and laundry rooms, three 11-by-11-foot bedrooms, a raised deck and an attached two-car garage.

The house, Grove said, was built for the director of Thomson Park, which opened in 1948 as Camp Chapaco but was renamed after the man who founded Champion Paper in 1893, Peter Thomson.

"I remember (the park director) had six or seven kids and lived there for many, many years," Grove said.

The house hasn't been occupied since Grove bought the place, but he had it remodeled so that it's solid and water tight, if not exactly modern. Some might describe it as a fixer-upper, but others might find it to be just right with a little paint and new carpeting.

The vinyl-sided house likely won't be what attracts the next owner of Thomson Park. It will be the facilities.

On the property are a gated entry with a guard house, a horse barn, five log cabins with electricity, a workshop, a softball field with concession stand and shower house, several small shelter houses, 40 campsites (a half-dozen have hookups), a creek and a pond.

Further making the property unique and possibly attractive to either a church, municipality, service club or very large extended family are its 160-by-60-foot commercial-grade pavilion and quaint chapel, which had been a kitchen and dining hall for rainy day events.

Thomson Park is too much for Grove to maintain anymore, and he's trying to sell it for $850,000 -- with a heavy heart and half a lifetime of memories

"I noticed this place 40 years ago or better when Champion had it," said Grove, who was born in Kentucky coal-mine country and recorded 50 albums over his career, including his first three at King Records in the late mid-1950s and several others at Lucky Records, both Cincinnati studios.

"It looked like ants on a honey hill, they had so many people here. I thought, 'This would be the greatest place for a ministry that's interested in youth.'"

He bought the property about 12 years ago with the intention of establishing a Soul Winners Church like the one he founded in Fairfield. Instead, Grove struck a land-contract deal with 10 investors who wanted to buy Thomson Park. When the men stopped paying property taxes after two years, they forfeited the park back to Grove by contract.

"They just pitched the keys back to me," he said. "And I thought, 'I'm old but not dead.' I decided to start another church. ... This was my vision. I thought 'Oh, God, this is the place for the ministry.' There are cabins for children with beautiful fireplaces. A lighted ball field, that still works ..."

Grove upgraded and added roads, built a large parking lot and remodeled the house. He created a chapel and hung a sign on it that still read "Soul Winners Church." He converted a shelter into a barn for his beloved horses.

"I cleaned up the land, but being my age and starting a new church with no people ... well, it's hard to draw folks to a ministry like mine. One thing I found out is that an old man don't draw anything but old people. I have the only AARP congregation in town."

He found other uses for Thomson Park, such as a flea market that got shut down because it violated zoning laws. And he's still trying. A wedding will be held at the park this weekend.

The church didn't pan out for Grove, and he fielded several offers over the years from potential buyers, some honest, some shady.

"I had a lot of people contact me about buying it. A lot of them were people who used to play ball here, but they didn't have no money. ... I had a lot of rock 'n' rollers who wanted to have concerts out here until 3 o'clock in the morning. And they had money. But I said, 'I ain't gonna do that to the neighbors.'"

Grove has turned the job of finding a new owner over to Realtors Amy Markowski and Jessie League.

"I just hope to God that before I die someone will find it and use it for people," he said.

Grove was discovered by country music legend Roy Acuff, who invited him to Nashville to sing rockabilly and country music. Grove performed on programs at several radio stations, including WNOP-AM in Newport. Among the stars he appeared with in concert were Acuff, Jim Reeves, George Jones, Ray Price, Skeeter Davis, Brenda Lee, Ferlin Huskey, Faron Young, Homer and Jethro and the Stanley Brothers,

One night, while Grove was working at a club called the Snake Pit, a man walked in with a Bible and asked if anyone wanted to be saved. The man got kicked out of the bar, but Grove sought out a preacher in the middle of the night and "gave his heart to God," according to his biography on bobbygrove.org. He switched his genre to Gospel in 1962.

Grove, his wife and co-pastor, Fayette, and their four sons led up-and-down lives due to his arthritis, but eventually rebounded and thrived by establishing a personal record club for Grove. Thirty-three of his records can be purchased on his website, including some that are available on vinyl only.

He and Fayette founded the non-denominational Soul Winners Church in Fairfield in the 1970s. In 1982, they opened the 70-bed Haven House Emergency Shelter in Hamilton for families with children.

Grove still preaches and sings "a little," he said. And he's still living the clean life, so much so that he doesn't allow alcohol at Thomson Park.