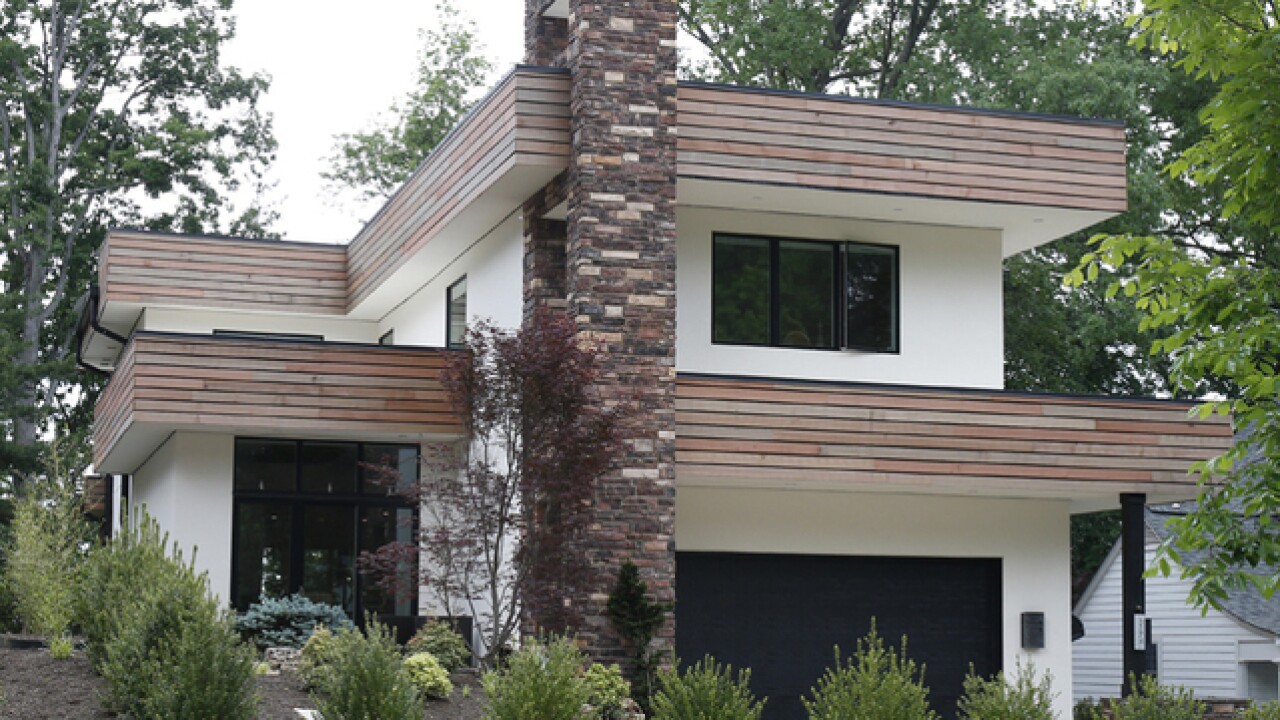 CINCINNATI -- Gasps and groans can ripple through Hyde Park when the venerable Cincinnati neighborhood loses one of its old homes to the wrecking ball and an architecturally modern house takes its place.

Sandi Tonich said that didn't happen, though, in 2016 when she and her husband, Jason, welcomed neighbors into the 4,700-square-foot home they had built where their 1932 house had once stood.

Flat-roofed and Asian-inspired, the house was based on a series of sketches made by world traveler Sandi, designed by Matthew Evans of Arcanum Architecture of Madeira and constructed by Justin Doyle Homes.

"I did want the exterior materials to blend into the neighborhood's eclectic houses," said Sandy, who studied marketing and advertising in her native Australia but turned to photography later in life. "We had an open house for the neighbors, and they were very enthusiastic about our house."

The Toniches had lived in Cincinnati twice before moving to Hyde Park in 2006. Their Portsmouth Avenue home had 2,600 square feet of living space, three bedrooms and a single bathroom and had been remodeled about 40 years ago following a fire. It looked more like a 1970s structure than one that was built in the 1930s.

As their child grew, the couple felt their family had grown out of the space and started looking around for a different house, possibly one that needed renovating.

"It took 18 months to convince my husband to tear down this house and build a new one," Sandi said. "It was what I wanted to do all along. I had been drawing plans for months in anticipation."

Sandi, whose husband works for General Electric Aviation and was in Southeast Asia when we toured his house, "went well-armed" to two architectural firms, including Arcanum. One of the many images she had collected to share with them was of a house with unique wood siding.

The deal was sealed.

Evans became the couple's architect and worked with Sandi on the plans. They were on the same page from the beginning -- even in regards to her desire to have purple kitchen cabinets -- and made only a few changes to those original blueprints, she said.

"He has been fantastic. He was constantly here, seeing that everything was going as planned," Sandi said. She also praised Doyle Homes president Ryan Kuenkel and his crew for their craftsmanship as well as the energy-efficiency steps that keep her Duke bills low (her last one was for $170).

The four-bedroom house includes three full bathrooms upstairs and powder rooms on the main floor and in the walkout basement. Its two-car garage is extra wide, and there is a railed-in back patio with gas barbecue, refrigerator, sink and unique compartment for cocktail ingredients.

The basement has three main rooms. Its vast recreation/family room features a modern black pool table and a 103-inch projection television with cushy theater seating for six. Two rooms off of it are used as a gym and office space for Jason.

The focal point of the house is its ground level. It is a wide-open space with white walls and ceilings that range from 11 feet to 14 feet as well as a 20-foot-high, cable-railed stairwell whose switchback stairs rise to a landing and hallway that lead to the bedrooms.

The unique qualities of the house begin as guests find the walkway past the garage to the front door on the side. There, on the corner of the garage, is a steel mailbox labeled in more than 20 languages -- brievenbus, postkassa, posta kutusu -- some of which the Toniches have encountered during their travels.

The path to the door is where the Asian influences become apparent. In a long rock garden designed by Bob Cianciolo of Cianciolo Designscape of Cincinnati stand a concrete pagoda and a recycling water feature shaped like a tower. Beyond it are two freestanding dividers made of plastic in bamboo frames that are staggered to conceal a pathway to the backyard.

Then there is the front door -- a 10-foot-high glass affair that's duplicated above it by a window in the stairwell. The two are a sign of more natural light to come in the living room, kitchen and dining room inside.

"I don't like the dark," Sandi said. "In fact, this house doesn't have enough windows for me. I need light."

She said she needs open space, too, and she got it with Evans' design. Other than the four walls that form a box at the end of the foyer, the ground level is wide open, giving guests a full view of the living room, kitchen and dining room from the middle of the space.

Eyes will be drawn immediately to the purple kitchen and Sandi's backsplash photograph of a Buddha, which she printed in a light purple tone. She said she had considered red and blue, but settled on purple, using a pair of her shoes as the palette for the lacquered wood cabinets made by J&N Distribution and Design of Lebanon.

Other unique choices by Sandi were to build an island on wheels and design a jigsaw border between the kitchen's tile flooring and the living room's Brazilian pecan flooring bought at Home & Decor in Pleasant Ridge. The island, she said, can be moved from in front of the sliding door to the back patio during party season to improve foot-traffic flow.

The Toniches' living room features a gas wall fireplace and two exceptions to Sandi's rule of not blocking wall space with built-ins. Two glass and chrome shelves flank a tall window and are filled with elephant figurines she has collected from around the world. The room's colorful artwork includes a floral boutique painting from Singapore, a traditional Chinese piece literally painted with hands, and an oil painting from Vietnam.

Between the kitchen and the dining room is an open beverage center that features a free-standing, wrap-around bar that Sandi designed, custom-glass hanging cabinets by California Closets, a wet bar, a large wine refrigerator and a piece of art that features three sheep drinking wine at a bar, one of whom is falling off its stool. Above them is the phrase: "Three sheeps to the wind."

That's Aussie humor, said Sandi, who spent part of her youth on a dairy farm before moving to Melbourne.

Not to be outdone by the other unique rooms, the dining room at the front of the house features an unusual light fixture. Instead of a traditional chandelier over the table, Sandi requested a floating ceiling made of six reclaimed boards. Its eight pot lights do what a chandelier does with the subtlety Sandi prefers.

The only chandelier in the house hangs in the stairwell. Sandi found the chrome fixture, which features eight intertwined rings, at Ferguson Bath, Kitchen and Lighting in Sharonville. The stairwell is so bright with natural light, however, Sandi said the chandelier isn't used often.

What's left to do

GE recently relocated Jason to Singapore, and the Toniches have arranged to rent their house while they're gone. But Sandi has plans for when they return. She has had second thoughts about deciding not to double the cost of the stairwell by making its risers open in design.

"That's my biggest regret, but I'm going to bloody do it the first thing when I come back," she said.