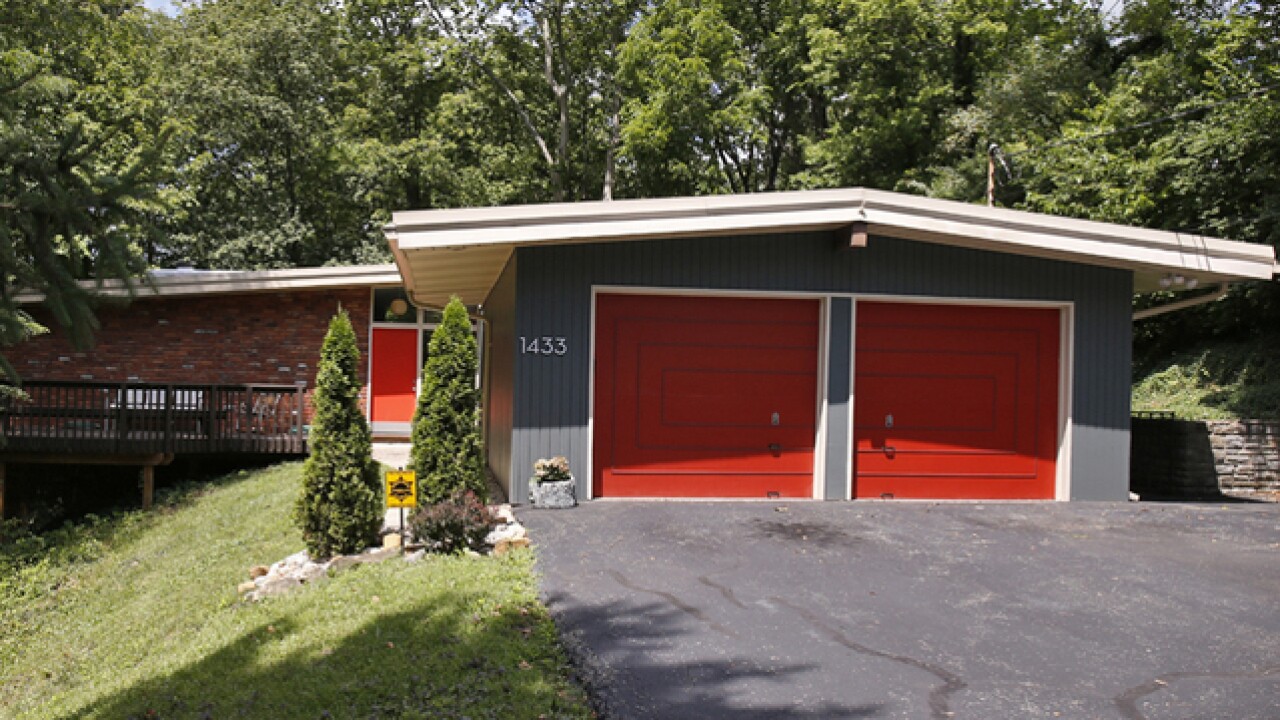 ANDERSON TOWNSHIP, Ohio -- Matt Summers is a self-proclaimed "scratch-and-dent guy." If something is broken, he'll fix it. If it needs painting, he'll paint it. If it needs legs, he'll scour Goodwill, Craig's List, Everything But the House, Etsy, antiques markets or the salvaged inventory at Building Value in Northside to find the right ones, even if they don't exactly match.

When it came time for Summers and his wife, Ginger, to buy a house in 2014, however, he was looking for something more turn-key -- a place with solid bones, maybe an eyesore or two, but basically move-in ready. And, most definitely, its architecture had to have a lot of character. The Summerses were living in an unexceptional townhouse in Mason when their home search brought them to a 1957-built beauty perched above a creek on a setback lot in Anderson Township. The mid-century house and its private, wooded lot spoke to them. "Buy me," it said.

"We were open to a lot of things that we love, things with character," Matt said. "Like the old houses in Clifton and Craftsman homes. But this was our ultimate desire."

The couple's love for the 3,000-square-foot, 4-bedroom, 2½-bathroom house was immediate and strong.

"We literally didn't leave the driveway, and put in an offer, and it was accepted," Matt said.

They took occupancy in September 2014, and he went to work immediately, repainting, swapping out old carpeting and installing new sub and cork floors, replacing the floating staircase treads, refinishing the screened-in deck, swapping out dated light fixtures and updating the entire kitchen.

Along the way, Matt and Ginger -- who said she began the journey with little experience with design but embraced her husband's love for all things mid-century modern -- furnished their home with affordable decor such as a Herman Miller conference table that Matt refinished and converted to a dining room table.

"I think we are pretty much done now," said Matt after more than two years of work.

The Wolfangel Road house is one of several in the region designed and built by Richard T. Calef (1921-2000), a Hughes High School graduate and World War II fighter pilot whose self-made career abruptly ended sometime in the mid- or late 1960s.

Calef built the house for his family. His wife died there. Documents on ancestry.com show he lived there for a number of years and then moved to a small town north of Houston where he remarried, lived out his life and is buried.

Calef's legacy is shrouded in mystery, with the exception of an October 1963 Cincinnati Enquirer article titled "House Built on Hill" that describes his home in advance of an Anderson Township home tour but includes no comment from Calef.

Matt Summers loves the home Calef created so much, he plans to document what he can find about the designer-builder and create a framed memorial to hang in the home forever.

Matt, a Kentucky native who graduated from Lakota High School and received a bachelor's degree in graphic arts from Northern Kentucky University, caught the mid-century style bug from a professor he had during a short stint at the University of Cincinnati. One visit to the professor's home, which was filled with modern furniture designed by 20th-century masters, was all it took, Matt said.

"For me, it was like, 'Oh, my god. This is crazy,' " Matt recalled. "I just started buying interesting things for real cheap."

With a limited budget, he purchased inexpensive knock-offs, sometimes using them as is, other times modifying them. Occasionally, he'd find the real deal.

"We've gotten some original pieces at Goodwill because he knows what he's looking at," said Ginger, who is a Harrison High School graduate with degrees from the College of Mount St. Joseph and Xavier University. In the beginning, she said, "I had no style because I was poor. But I've evolved."

Matt's projects are everywhere in the house. In addition to the aforementioned Herman Miller table, there's a Paul McCobb credenza in the kitchen whose drawers Matt painted turquoise and whose doors are accented with stenciled circles, squares and triangles in beige and gray. Those colors, as well as yellow, were prominent in Calef's original home but are gone accept for a set of metal turquoise cabinets in the laundry room that were manufactured by General Electric.

Matt also built a mid-century-style floating hearth out of poplar wood and black laminate for the home's brick fireplace and a coffee table out of an old foundry mold he bought at auction, and spindle legs from Building Value.

"I'm a piddler; it's a hobby," he said of his woodworking.

The Calef House is large for a mid-century home, with its living space equally divided on the ground floor and lower level. Guests enter the property and see mostly garage, which is a two-car affair with a mid-century graphic design on its doors. To its left is a short walkway leading to a deck-wood patio and the front door to the brick, paneled glass and grooved plywood house.

The charcoal-colored tile foyer -- which the Enquirer article said originally featured a tile floor that "glows with citron, turquoise and rose tones" -- branches in three directions: down to three bedrooms; right to the powder room, kitchen, family room, marmoleum-floored laundry room, and fourth bedroom; and left to a great room and screened-in porch.

The colors are more subdued than in Calef's day, but select fabrics, ceramics and artwork -- including a framed set of Charley Harper-like bird prints -- splash the space with interest and soak up the generous natural light let in by floor-to-ceiling, plate-glass windows.

"I have photos of deer looking in our windows. That's what I love about it," Matt said, adding that the windows once fooled a hawk that flew right into one.

Adding mid-century pop to the Summerses' home are throw pillows Matt designs and sells through his entrepreneurial business. They feature repeating patterns in contrasting colors based on shapes inspired by those in schematic drawings of electrical systems.

Two rooms in the home -- the powder room and kitchen -- illustrate how the couple maintained the period charm of the house and blended in modern conveniences and style.

The small powder room features its original surfboard-shaped, hanging vanity and white tile half-wall and floor, which are made of 2-inch-squares that were popular in the 1950s. Matt updated the wall colors and lighting, but the Summerses kept a built-in, open cabinet next to the toilet that features a cigarette tray.

The previously remodeled kitchen was a major project for the couple. They installed a "penny style" backsplash, a bamboo-topped island and new appliances. They replaced the cabinet doors with maple ones that matched the old boxes. Instead of topping the countertops with Formica's throwback "boomerang" laminate, the couple chose a blue-gray laminate with a crosshatch pattern.

Their reasoning is at the core of what the Summerses have done to their home.

"We didn't want it to look too original," Matt said. "We wanted it to look like the bones of what this was."