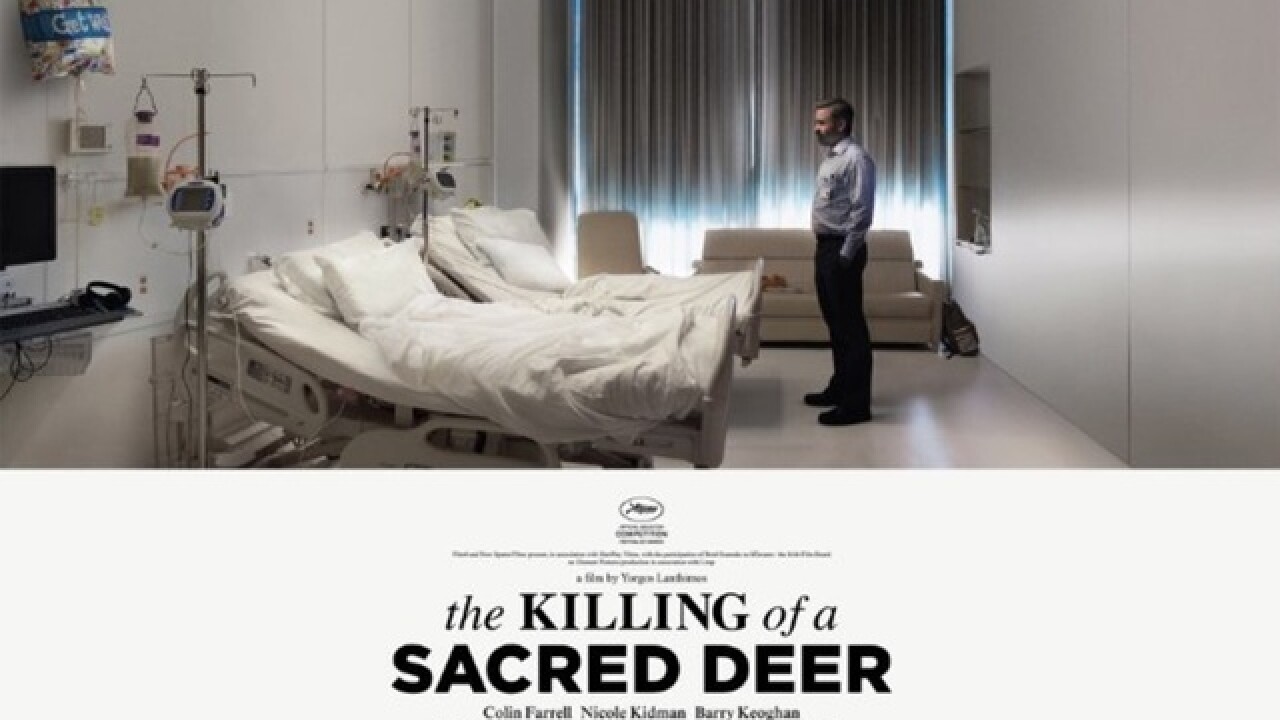 Copyright 2017 Scripps Media, Inc. All rights reserved. This material may not be published, broadcast, rewritten, or redistributed.
<p>Movie poster for "The Killing of the Sacred Deer."</p>

Yorgos Lanthimos' Cincinnati-shot "The Killing of a Sacred Deer" won Best Screenplay at the Cannes Film Festival this weekend.

The film, starring Nicole Kidman and Colin Farrell, is billed as a psychological thriller with a supernatural element inspired by ancient Greek tragedies.

Farrell plays a surgeon with a near-perfect life that begins to unravel after meeting a teenage boy with sinister intent. Kidman plays the surgeon's wife.

The film debuted at the film festival over the weekend.

BELOW: Watch two clips from the film published by Upcoming

Richard Lawson, in his review for Vanity Fair, called the film "cold" and "unlovable."

I’m being vague here because the particulars of Sacred Deer’s plot are probably best left unspoiled. I think I can safely tell you that the film is about a heart surgeon (a muted Colin Farrell) and his wife (Nicole Kidman, bringing her familiar watchful glow), also a doctor, who find themselves in a nightmarish predicament when a peculiar teenage boy named Martin (Irish up-and-comer Barry Keoghan) enters their lives. There’s a terrifying, atavistic form of justice and revenge at work in Sacred Deer, a reckoning for past sins that turns the film into something of a classical tragedy, albeit one with a decidedly modern sense of cynicism and wit.

Lawson compared the film's "elemental horror" to that of "The Shining."

The Independent reported the film was booed, despite its big win at the festival.

David Ehrlich of IndieWire called the film a "Sophie's Choice" remake; The Los Angeles Times' Steven Zeitchik called it "the most chilling horror film imaginable," and Alex Billington of FirstShowing.net said "you'll either love or despise this movie."

The film was secretly shot in Cincinnati last summer. Farrell met with surgeons at Christ Hospital about a week before shooting started, hospital officials said.

Dr. Mario Castillo-Sang, a cardiac surgeon at Christ Hospital, showed Farrell the ins and outs of surgery. Castillo-Sang said he took part in an operating scene in the film – but that’s about all he could say. He described the film as dark and interesting.

One Christ Hospital employee impressed the director so much, he was given a speaking role.

Herb Callouet, executive director of Christ Hospital’s Joint and Spine Center, was giving Lanthimos a tour when the director offered him a role in the film as a hospital administrator.

“It was a got-to-be-kidding-me kind of moment,” he said. “I never thought in any way, shape or form what would come about.”