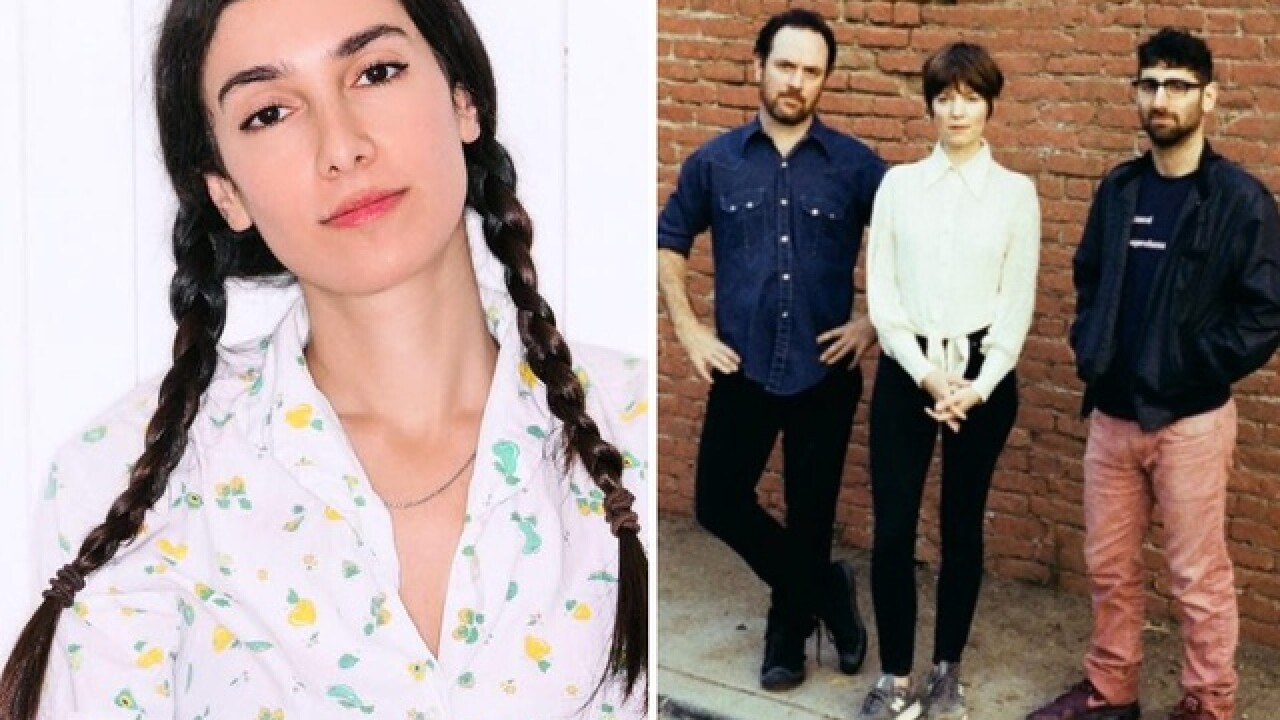 Copyright 2017 Scripps Media, Inc. All rights reserved. This material may not be published, broadcast, rewritten, or redistributed.
Facebook
<p>Bedouine (left) and DYAN are both coming to WCPO Lounge Acts before performing at MidPoint Music Festival on Sept. 23.</p>

Listen to Bedouine's solo acoustic performance on Lounge Acts above.

CINCINNATI -- At a time when raucous, highly produced pop, amplified arena rock and jittery electronic jams are the musical currency of the day, Azniv Korkejian is a tranquil pond. The Hollywood-by-way-of-Aleppo folk singer is a throwback strummer whose tour de force single “Solitary Daughter” contains what might be her mission statement: “I don’t need your company to feel saved… I don’t want your pity, concern or your scorn/ I’m calm by my lonesome/ I feel right at home/ Leave me alone to the books and the radio snow.”

Think about how punk rock that notion is as you ponder the latest outrage from Washington or headline about a deadly natural disaster. Fittingly, Korkejian has adopted Bedouine as her stage name, a feminized version of the word used to describe nomadic Arab tribes who traditionally live in the deserts of North Africa and the Middle East.

And, as you will notice when she plays at this weekend’s 2017 MidPoint Music Festival and visits WCPO’s Digital Lounge on Saturday morning for a Lounge Acts set, she is a one-woman tour de force who doesn’t need rattling studio tricks to drive a point home. A serene singer whose calm nature is an antidote to the over-caffeinated popular music of the day, she chose the name as a symbol of her own peripatetic life.

"Moving around so much caused me at some point to feel displaced, to not really belong anywhere and I thought that was a good title,” she explains in her bio. Born in Aleppo, Syria, to Armenian parents, Bedouine grew up in Saudi Arabia before her family settled in Boston and then Houston. Los Angeles; Lexington, Kentucky; Austin, Texas; and Savannah, Georgia were all stops along the road before she moved back to Hollywood to work as a dialogue and music sound editor.

"I just kept meeting the right people, who were professional musicians, and even though they were going on these big legitimate tours, they were still coming back to this amazing small scene, still demoing at home, and I immediately felt welcomed to join in on that. L.A. actually made me less jaded," she says.

It was the constant motion, the inhalation of so many cultures, sights and sounds that inspired the classic 1960s folk-meets-1970s-country-soul sound on her self-titled debut, which was released in July on singer Matthew E. White’s Spacebomb label. The gauzy album has hints of bossa nova and clear inspirations from Joni Mitchell’s forthright storytelling to Brazilian samba singer Astrud Gilberto’s groove and the melancholy of Nick Drake and Leonard Cohen.

It was crafted with a crack team of side players, including longtime Beck/Tom Waits guitarist Smokey Hormel and bassist/producer Gus Seyffert (Beck, Norah Jones). But it is 32-year-old Bedouine’s clear-eyed, confident storytelling that rises above the lush arrangements.

"While the rest of the record dazzles with sweetness—'like a lamp in the light of day/Drowning in summer rays,' as she puts it—the centerpiece is a haunting protest song," writes Sam Sodomsky for Pitchfork of the song emotional “Summer Cold,” Bedouine’s reaction to America’s role in the chaotic civil strife in her native Syria. To drive the point home, the singer uses sound samples she found to sonically recreate her grandmother's street in Aleppo.

Make sure to check out Bedouine at 7:25 p.m. on Saturday on the Skyline Chili Stage at the Taft Theatre during the MidPoint Music Festival.

Listen to DYAN's performance on Lounge Acts above.

Another LA act, indie synth pop trio DYAN took a few years to settle into their own songwriting from scoring film and TV projects, but once they did, people paid attention.

The title track of their July 2016 debut album "Looking for Knives" topped a half-million plays on Spotify's Viral Chart within a month's time.

Frontwoman Alexis Marsh (vocals/guitar/bass) had been composing film scores out west with Samuel Jones (guitar/synths), but she told Billboard she moved back to Cincinnati to focus on writing "Looking for Knives."

"I was getting anxious about having this open-ended project so I took some time out," Marsh said. "I had thought writing the songs would be a type of exorcizing of memories. ... at a pivotal moment of anguish, my grandmother told me I didn’t owe my happiness to anyone else. There’s so much freedom in not giving a damn."

Alexis & Sam's transformation into DYAN was complete when they brought on Dan Dorff Jr. (drums/synths), who Marsh knew from attending the University of Louisville.

Make sure to check out DYAN at 5:05 p.m. on Saturday on the Skyline Chili Stage at the Taft Theatre during the MidPoint Music Festival.