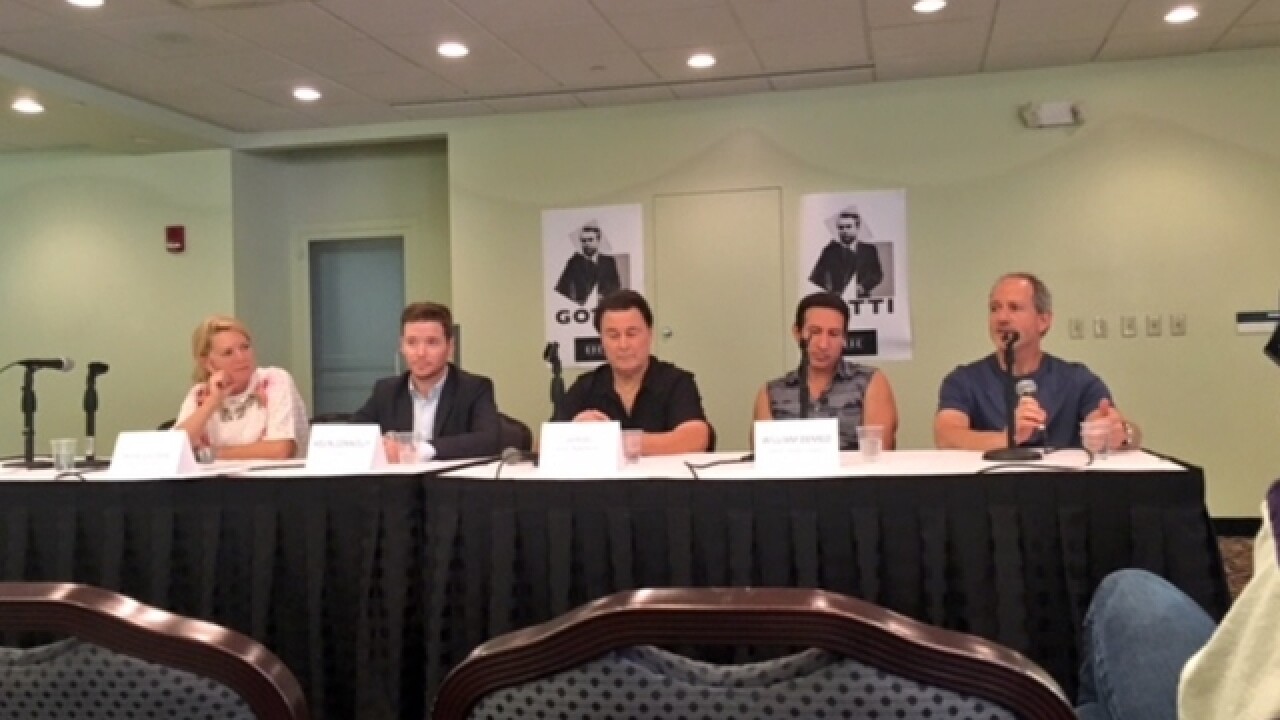 CINCINNATI — It is almost lights out for filming of the “The Life and Death of John Gotti” in the Queen City.

The biopic about the New York mob boss, which stars John Travolta as Gotti and Kelly Preston as the mobster's wife, has only three days of shooting left in the region, said director Kevin Connolly at a news conference Monday. Filming began in Finneytown on July 25.

Here’s what else we learned about “The Life and Death of John Gotti.”

Cincinnati has been friendly to the crew (of course): “Everybody has been super, super courteous,” Connolly said. “I knew we’d have cooperation with the local film community, but people on the streets have been more cooperative than they needed to be.”

Like “Pulp Fiction,” “Gotti” will show Travolta dancing: Connolly said that following the news conference, the cast would shoot the scene of John Gotti Jr.'s wedding at the Hilton Cincinnati Netherland Plaza.

“It will be a lot of fun,” he said. “All the cast members will be here, everybody will be really dressed up, and most importantly, we get to watch John Travolta dance, which is always nice.”

Cincinnati is a solid New York substitute: The director said that though this is his first visit to Cincinnati, he did know some things about it from movies such as “Carol,” which was also was shot locally and served as a stand-in for New York of eras past.

In "Gotti" the region is transformed into 1970s and 1980s New York, and according to Connolly, Cincinnati lived up to its reputation for historic architecture. “It’s amazing how there are parts of Cincinnati that can pass for New York,” he said.

“Even if we were to go to the real location in New York, it just doesn’t look like that anymore,” he added.

Aside from the Hilton and Finneytown, the crew has filmed scenes at the Butler County Jail and at 14th and Vine streets in Over-the-Rhine, an intersection that the crew turned into a Fourth of July scene with a few barbecues and some fireworks.

There hasn’t been much time to hang out: Connolly said his busy work schedule has prevented him from exploring much of the city. In July he went to the Guns N’ Roses concert at Paul Brown Stadium and a few Reds games but missed Paul McCartney at U.S. Bank Arena, he said.

You will see familiar faces in the film … : “We were able to find most everything” in Cincinnati needed to make "Gotti," the director said, including local actors, crews and extras to fill scenes. “It’s been a great place to be for the last eight weeks.”

… and Jeff Ruby is one of them: Connolly said that while staying at 21c Museum Hotel, he has frequented Jeff Ruby’s Steakhouse and other nearby spots. “I believe Jeff Ruby has himself a nice cameo. He’s been good to all of us,” he said.

No, he has NOT had the chili: Though he has indulged in several steaks, Connolly said he has not yet tried Cincinnati-style chili, though “I keep hearing about it. And everybody has told me about the fried chicken” at the Eagle in Over-the-Rhine.

We could get a local premiere: With months of editing and post-production work ahead, Connolly said he would love to come back to Cincinnati once ”The Life and Death of John Gotti” receives a release date.

“I would love a Cincinnati premiere,” he said. “We would at least owe it to the people of Cincinnati and Ohio and everybody that’s been really good to us. That would be really fun. I’m in -- sign me up.”