Thanks to Cincinnati Zoo's rehabilitation program, two lucky manatees got to fly home to Florida

Matthew and Miles were orphaned nearly 2 years ago 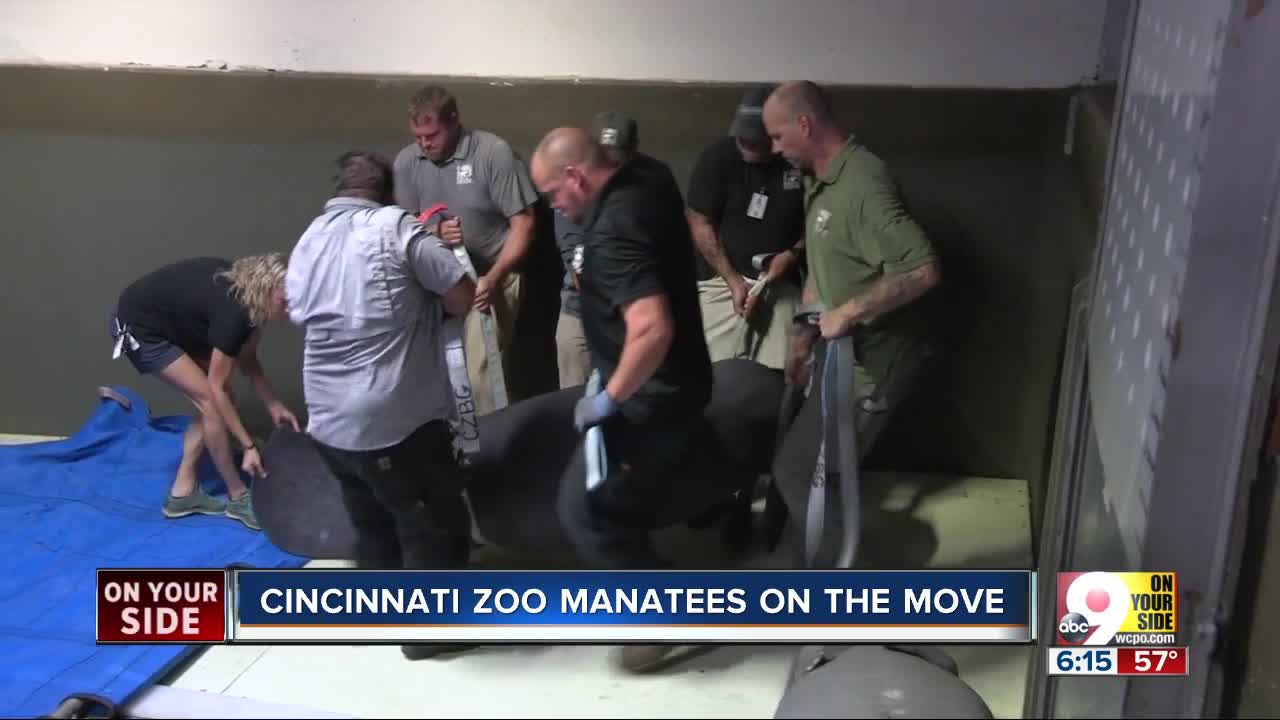 Nearly two years ago, orphaned manatees Matthew, Miles and Pippin arrived at the Cincinnati Zoo for rehabilitation. This week, Matthew and Miles flew home to Florida. 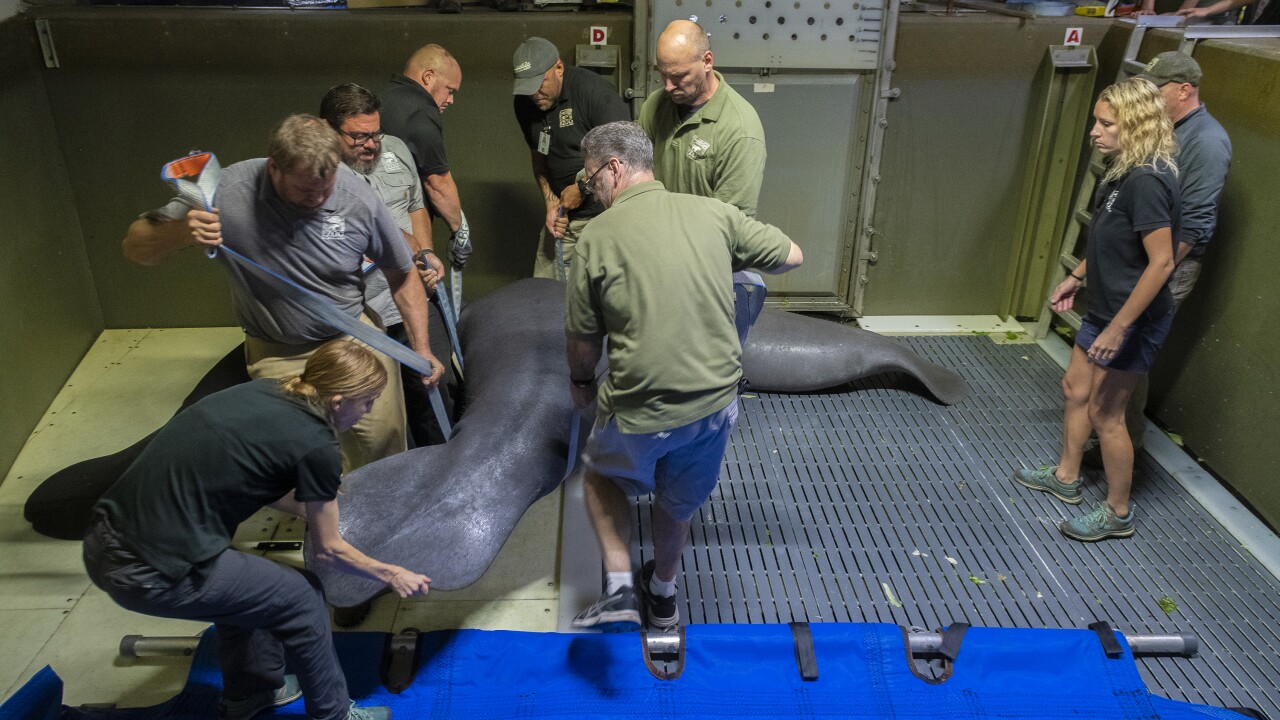 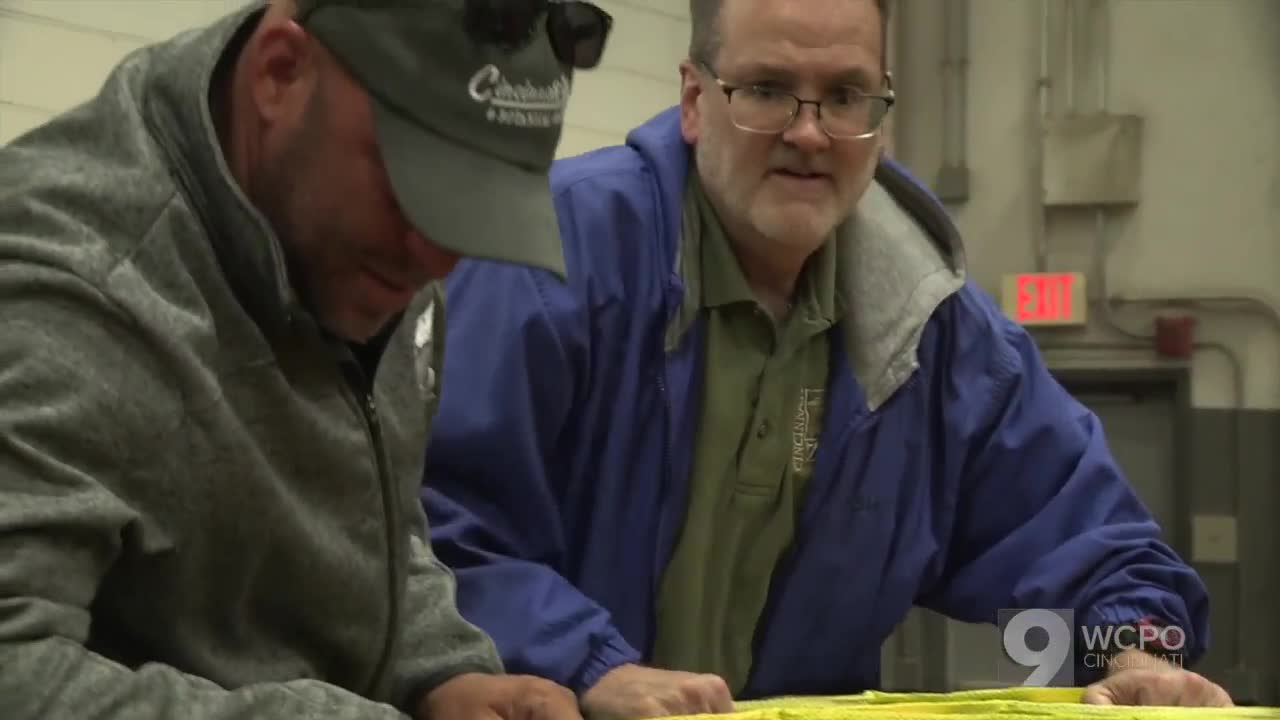 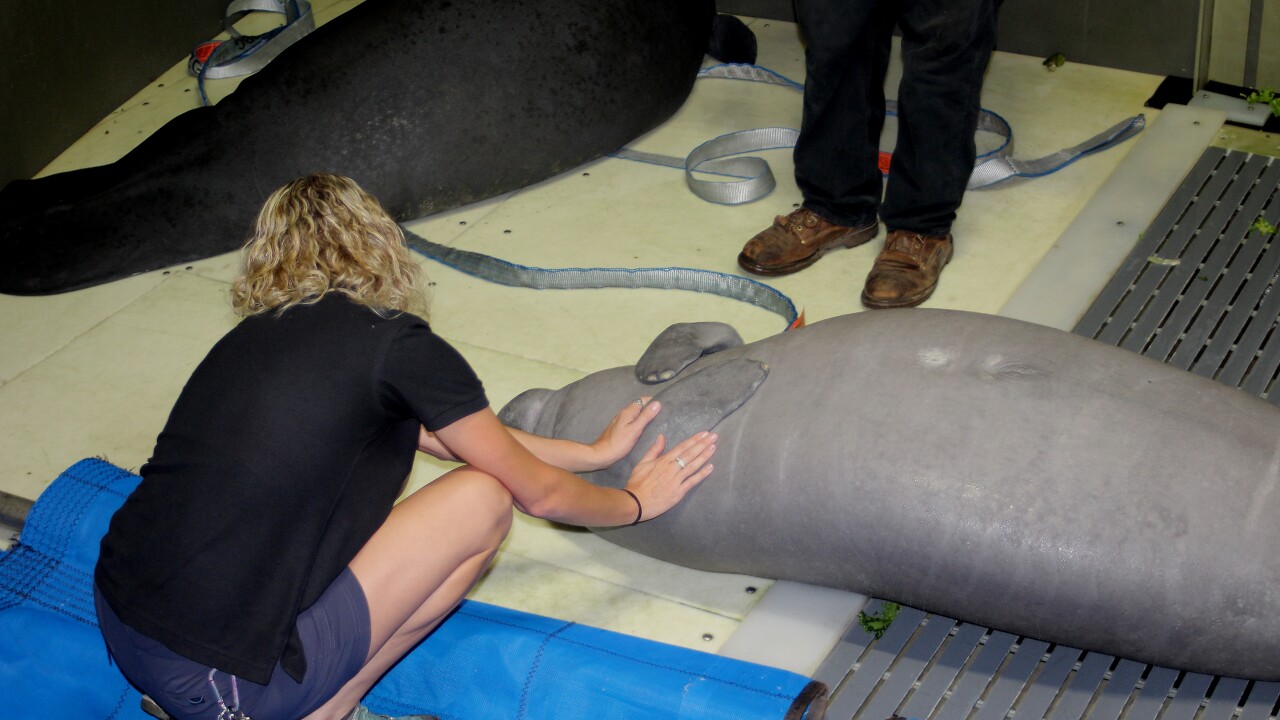 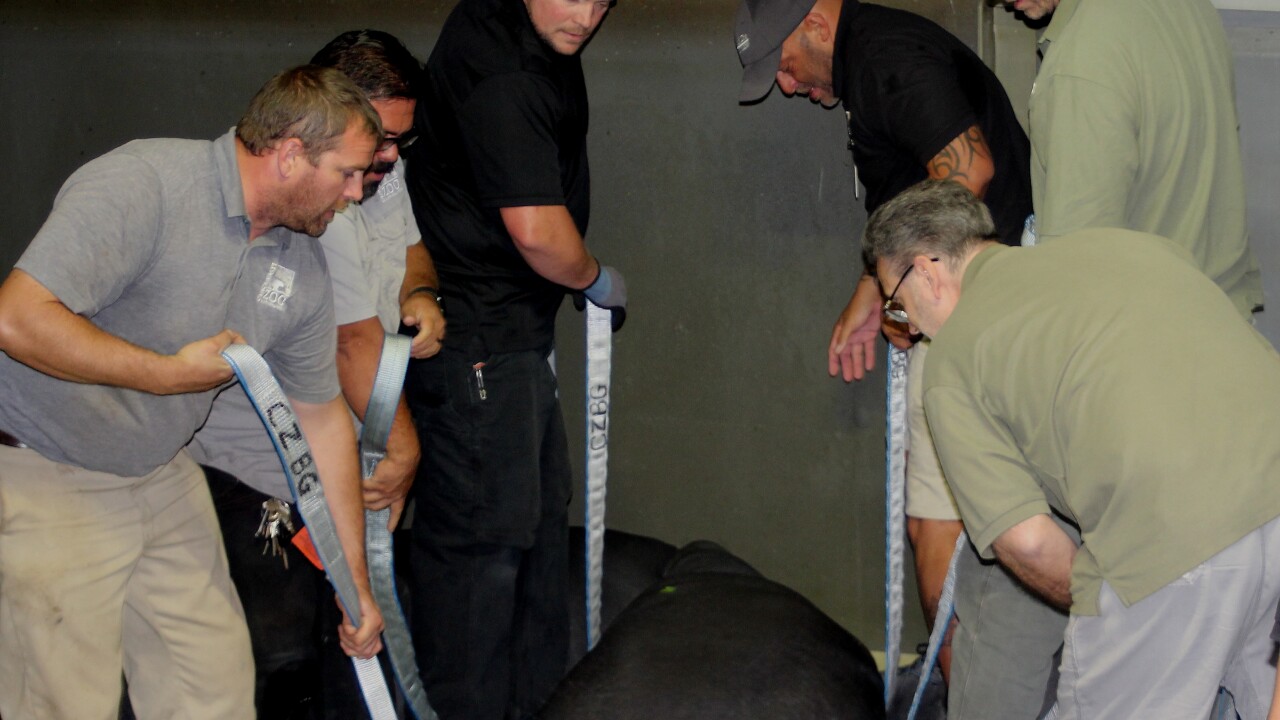 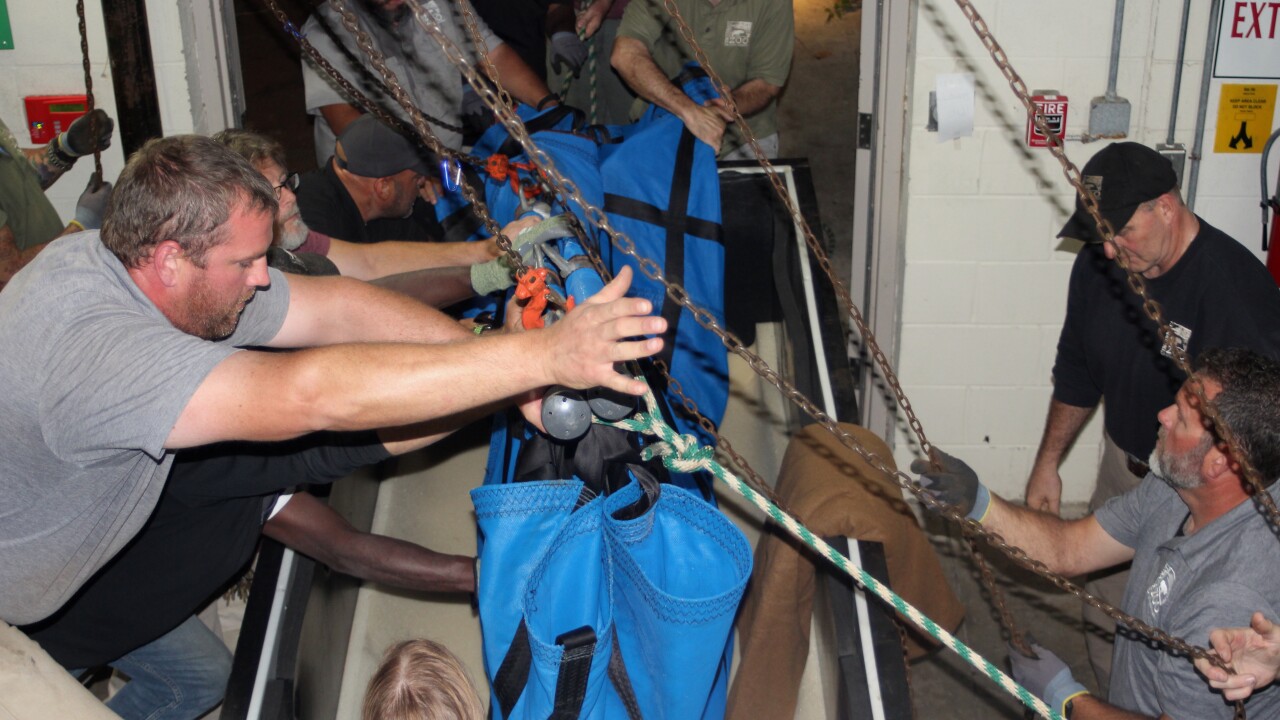 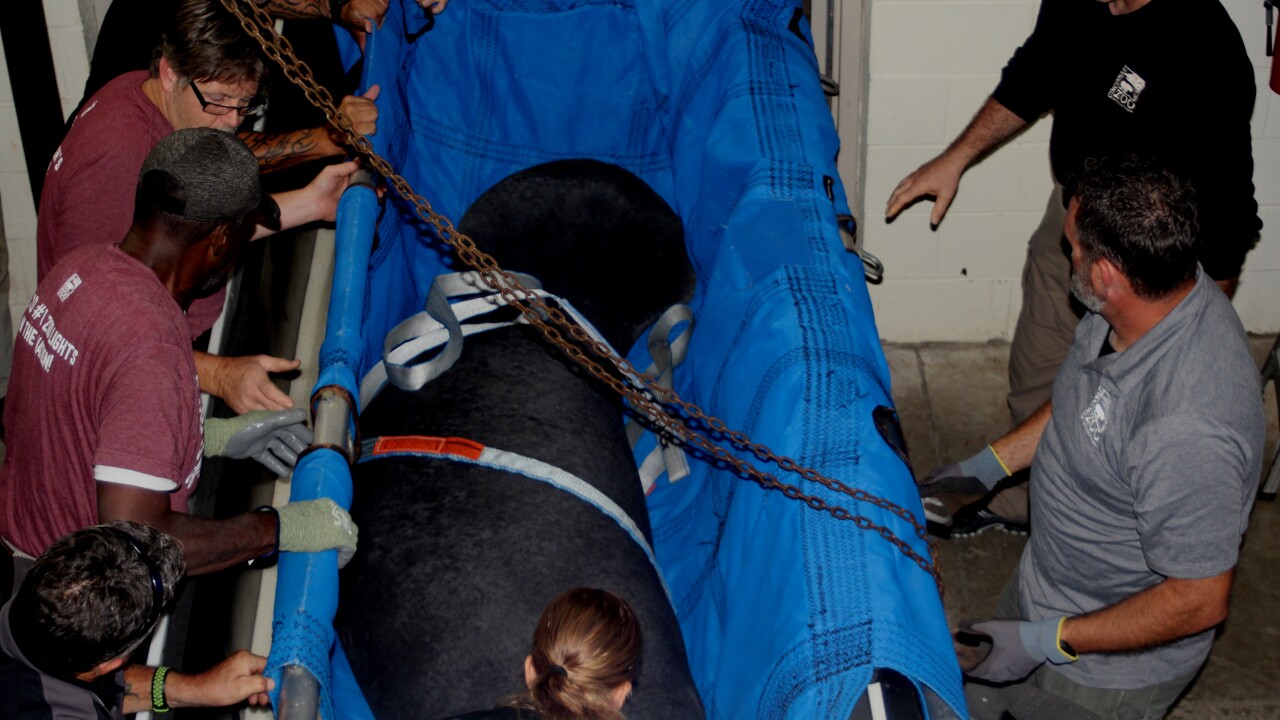 CINCINNATI — What does it take to move a manatee?

Early Tuesday morning, the zoo returned manatees Matthew and Miles to Florida to be released into the open. SeaWorld Orlando caretakers then exchanged the pair for orphaned manatee Truffleshuffle, who was flown to the Cincinnati Zoo.

The newest addition marks the 20th manatee in the zoo’s 20th year of participating in U.S. Fish and Wildlife’s Manatee Rescue Rehabilitation and Release Program (MRP) .

According to manatee caretaker Lindsay Garrett, as the manatees have progressed into their teens, their personalities have changed and they’ve become far more independent.

“These were the youngest manatees we’ve had, so it’s hard to see them go,” she said. “It’s sad, but it’s time.”

Orphaned manatees Matthew, Miles and Pippin arrived at the Cincinnati Zoo nearly two years ago with the goal of reaching 600 pounds for release. While Matthew and Miles surpassed their target weight in early spring, curator of invertebrates and manatees Winton Ray said Pippin only managed to top the scales at 500 pounds. He said the team was hopeful the young manatee would depart with the others, but just as children grow at different rates, so do manatees.

Ray said the revised plan is to return Pippin to SeaWorld with the zoo's new arrival, Truffleshuffle, in 2021.

“Pippin is a healthy animal, he’s thriving, strong and confident,” he said. “He’s everything you want in an animal that’s going to be released back to the wild, but he just hasn’t grown as quickly as we would have hoped.”

To move the manatees, the team first drained the boys’ holding pool. Next keepers slid straps under the manatees to gently lift them into position onto a large sling. Once in place, a reluctant Matthew rolled himself back out, so the team had to repeat the process. Ironically, later in the move, Pippin rolled himself onto the sling, seemingly volunteering to go, which elicited chuckles from the crew.

“Just because of the sheer weight and power of manatees, they can be a challenge to move,” Ray said.

Ray said before Matthew and Miles are released, they will spend three to four months at SeaWorld's Rehabilitation area, where caretakers will gradually introduce them to their new environment. Because the two manatees are considered naïve, Ray said, they’ll wear tracking devices to monitor their location, weight and body temperature for a year. He said biologists also will go out to visually check them biweekly to ensure they’re making a smooth transition.

“If they go 12 months without needing human intervention, the tracking paddle will be removed and they’ll happily live their lives,” he said. “We’re not going to put animals out there if we don’t have confidence they’re going to survive.”

Earlier this summer, Ray put the wheels for the move in motion by contacting SeaWorld and cargo airline DHL to coordinate the flight, then assembled the team for the actual move.

Closer to the date, he said, Ray contacted Ohio and Kentucky highway patrols to ensure their route would be clear to the airport and free of road closures.

“You plan it through, you talk and think about it, you wake up in the middle of the night, but ultimately we’re ready to go,” he said.

When it comes to the heavy lifting, Ray said, the manatee care team relies on the zoo’s maintenance department. He said the crew takes great pride in carefully and safely moving the animals. He said their maintenance team is currently working double duty, with preparing for the PNC Festival of Lights during the day as well as caring for 80 buildings on the property.

“They work all day and they come in at midnight and they’re here till 2 or 3 in the morning, and they never complain,” he said.

The three-way manatee exchange is the 19th time DHL has flown the giant mammals, said Joe Collopy, DHL air capacity sales director. He said each move carries its own complexities, since manatees vary greatly in weight and are moved in specially designed, 10-foot-long foam-lined cases.

Collopy said, depending on the weather, the animals must be kept indoors for maximum comfort. Then they are loaded onto the plane last so they’ll be the first off.

“It’s always exciting to be moving them,” Collopy said. “It’s a great program between our two organizations. We’ve done very well with these in terms of safety and caring for the manatees.”

Collopy said manatees need to be carried on a cargo plane as opposed to a passenger jet because the manatee care team needs access to continually check on the animals during the flight. On a commercial carrier, the care team would not have access to the cargo area.

He said DHL's main priority is to make sure the animals arrive to their destination safely.

“At DHL we’ve established a team and everybody is onboard with it because it’s such a great program,” he said. “The manatee population is coming back, and we feel like we’re doing our job to be part of it.”

For Ray and the manatee caretakers, the move is bittersweet; during the last two years they’ve grown attached to the animals. He said if the Manatee Rescue Rehabilitation and Release Program was a complete success, there would be no manatees in professional care. But with 8,000 to 10,000 manatees in Florida being challenged by 100 million tourists in boats or jet skis, red tide and cold stress, Ray said he anticipates that the program will continue indefinitely.

“Our goal is to get them bigger and stronger and hopefully set them up for success in the future,” he said. ”It’s a good story to tell. I always tell people this is a second-chance program, and people love second chances.”