Spicy foods an increasingly hot market for Jungle Jim’s, and this man in particular 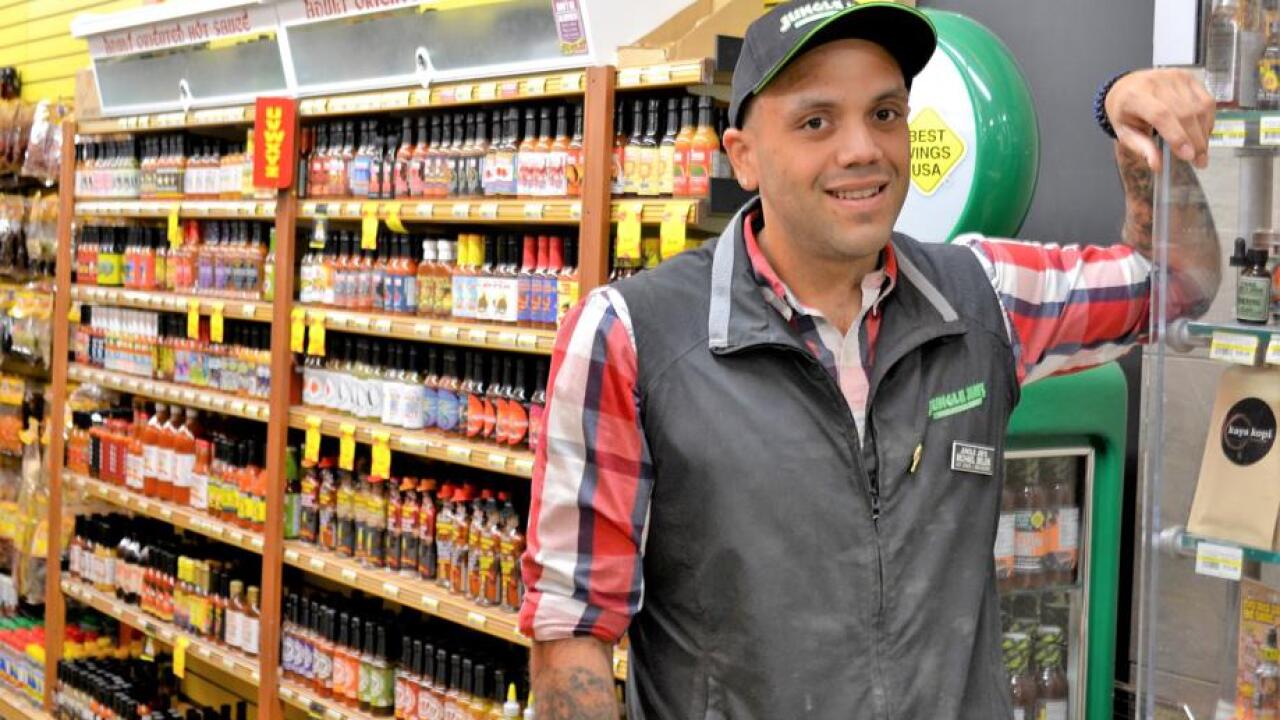 The hot sauce and barbecue buyer for Jungle Jim’s International Market wasn’t always a fan of all things spicy.

But Belen, who originally is from New Jersey, developed his love for those products on the job.

“Before I started with Jungle Jim’s, I hated hot sauce,” he said. “I expanded my horizons … expanded my taste buds. I took them on a flavor journey.”

Spicy foods have been a hot market because “it’s a fun hobby,” one that is fueled by events like Jungle Jim’s Weekend of Fire, which this year holds its 13th annual edition Oct. 5 and 6, Belen said.

“A lot of the guys who do it … they just love either the cooking or enjoying the spiciness,” he said. “‘I enjoy my chiliheads.”

Belen said the vast variety of spicy foods keeps him constantly looking for more options, including everything from hot sauces infused with maple syrup or honey to the Toe of Satan, the world’s spiciest lollipop. Itis 900 times hotter than a jalapeño pepper and even hotter than the hottest pepper on Earth, he said.

“It’s pretty hard to keep up with,” he said. “You’ve got to keep up with what’s current. Social media is key. If it wasn’t for these little trends of people doing certain challenges then I wouldn’t know what’s hot, what’s not, what people are into.

Belen said he reads reviews for products that customers request, using YouTube as a resource for his research.

Most of the growth in the industry in the past three years has been fueled by Hot Ones, a series on the First We Feast YouTube channel.

Sales of a variety of hot sauces that Jungle Jim’s initially found to be slow movers “took off” when they were featured on the Hot Ones series.

“Most of the hot sauces they have on their show we carry at Jungle Jim’s and people want to come and try these hot sauces that they see on YouTube and it really, really helped our sales a lot,” Belen said.

Being responsible for gradually boosting sales for a hot sauce or spicy product feels “pretty awesome,” he said.

“That’s (what happens) when people expand their tastings,” Belen said. “People think, ‘I just want Frank’s Red Hot’ or ‘I just want Tabasco,’ so I’ve got to explain to them we’ve got so many options for so many different things.”

Organizing for Weekend of Fire happens throughout the year, but his most active time planning it out happens from early July until the big weekend itself.

Even after five years of immersion into the hot food market, Belen does not consider himself an expert.

“I’m still learning from others, still growing,” he said.