'Reprisal:' 9 things we learned about the movie, cast and crew 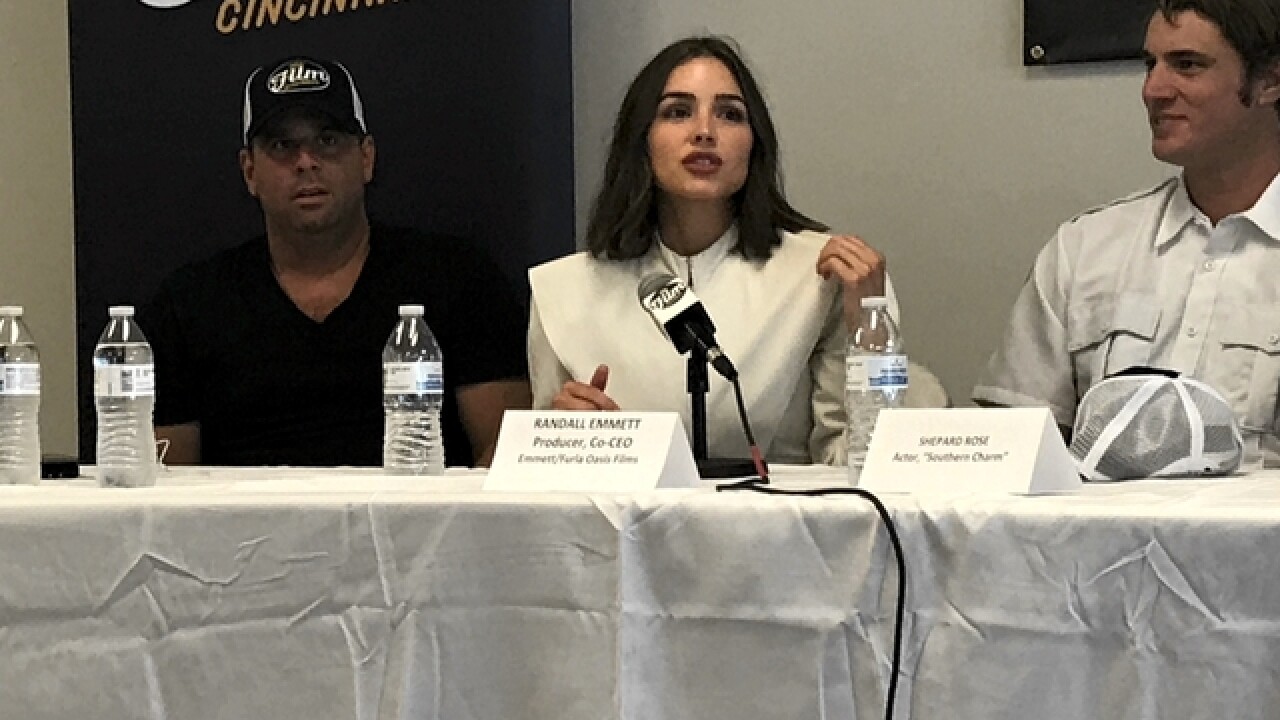 Copyright 2017 Scripps Media, Inc. All rights reserved. This material may not be published, broadcast, rewritten, or redistributed.
<p>Actress Olivia Culpo discusses her roll in the movie "Reprisal" during a press conference organized by Film Cincinnati. The movie began production at Smale Park on Monday.</p>

CINCINNATI -- The Roebling Suspension Bridge is among the stars of "Reprisal," the movie Bruce Willis & Co. are currently filming in the Queen City -- and it has an explosive storyline.

That's one of the tidbits that director Brian A. Miller revealed at a news conference on Wednesday, where he was joined by Randall Emmett, producer and co-CEO of Emmett/Furla Oasis Films, and actors Olivia Culpo, Frank Grillo, Shepard Rose and Craig Conover. (Willis and Johnathon Schaech, both of whom filmed the bank heist movie "Marauders" in Cincinnati in 2015 and also have roles in "Reprisal," were unable to attend.)

RELATED: Where to expect staged gunfire, car crashes and robberies next week as ‘Reprisal' filming continues

Miller said cast and crew spent their first three days filming the movie’s climactic ending at the Roebling bridge and Smale Riverfront Park. You read that right: Miller is filming the end of “Reprisal” first -- and the iconic blue bridge is the star.

“I really appreciate you letting us blow it all up,” Miller said jokingly.

Here's what else cast and crew revealed about the film.

Caught the end of day 1 of filming "Reprisal" starring Bruce Willis at Roebling Bridge during my evening run. That 1st step is a doozy. pic.twitter.com/CJNfthn8I6

Main characters: Miller and Emmett repeatedly emphasized that actors Grillo and Miss USA 2012 Culpo are the true stars of “Reprisal.” They play struggling husband and wife Jacob and Christina. Willis plays the couple’s neighbor who tries to help Jacob as Jacob grapples with post-traumatic stress disorder after a bank robbery. Schaech plays "Gabriel," a man who drives Jacob into an extreme confrontation.

Warm welcome: This is Culpo's first visit to Cincinnati, but she already has a friend here. Fellow Miss USA 2012 contestant Katherine Webb-McCarron, wife of Cincinnati Bengals backup quarterback AJ McCarron, was Miss Alabama USA the year Culpo won the Miss USA crown. “I hope to spend some time with her,” Culpo said.

Southern charmed: Rose and Conover, stars of Bravo reality television show “Southern Charm,” are extras in "Reprisal." Rose showed up to the press conference dressed as a paramedic, Conover as a police officer.

Good Cop, Bad Paramedic. Coming to a theater near you. @caconover

A homecoming of sorts: Rose said he was born in Cincinnati. His father practiced law in the Queen City before moving the family to South Carolina when Rose was 2 years old. You can watch Rose's life as a 25-year-old single socialite in Charleston on “Southern Charm,” which is now in its fourth season.

Rose didn’t say whether he took Skyline Chili up on its invitation before leaving Cincinnati on Thursday.

Hey @ShepRose, we hear you're coming to town. Let us know if you'd like to try a Cincy staple while you're here!

Downtime: The cast spent Tuesday night at Jack Cincinnati Casino. Grillo also gave a shout-out to the Punch House boxing gym at 3911 Reading Road, where he said he spars, and Emmett said he threw out the first pitch at a recent Cincinnati Reds game.

“I never played sports,” Emmett said. “There was a lot of people at the stadium, and it was very large. I managed to get the ball right across the plate. It was the greatest day of my life.”

Yes it was epic.

How long will crews be here?: Miller and Emmett said they plan to wrap up primary filming within two weeks. The movie is being filmed entirely in Cincinnati, Miller said.

Release date: Emmett said Miller will take about five or six months editing the movie after filming ends, adding that people could see “Reprisal” as early as April or as late as October 2018. “It just depends on the studio,” he said.

Repeat business: “Reprisal” is the fourth movie Emmett/Furla Oasis Films has shot in Cincinnati. Prior films include "Marauders," "Inconceivable" and "The Life and Death of John Gotti." Emmett said state tax credits, local architecture, convenient shooting locations and friendly people are why he keeps making movies here, and he wants to make more in Cincinnati in the near future.

“We love this city,” he said. “We applied for eight more movies to be made in Ohio. We expect to be here for a long time.”