Then and Now: A look back at 'Rain Man' in Cincinnati and Northern Kentucky 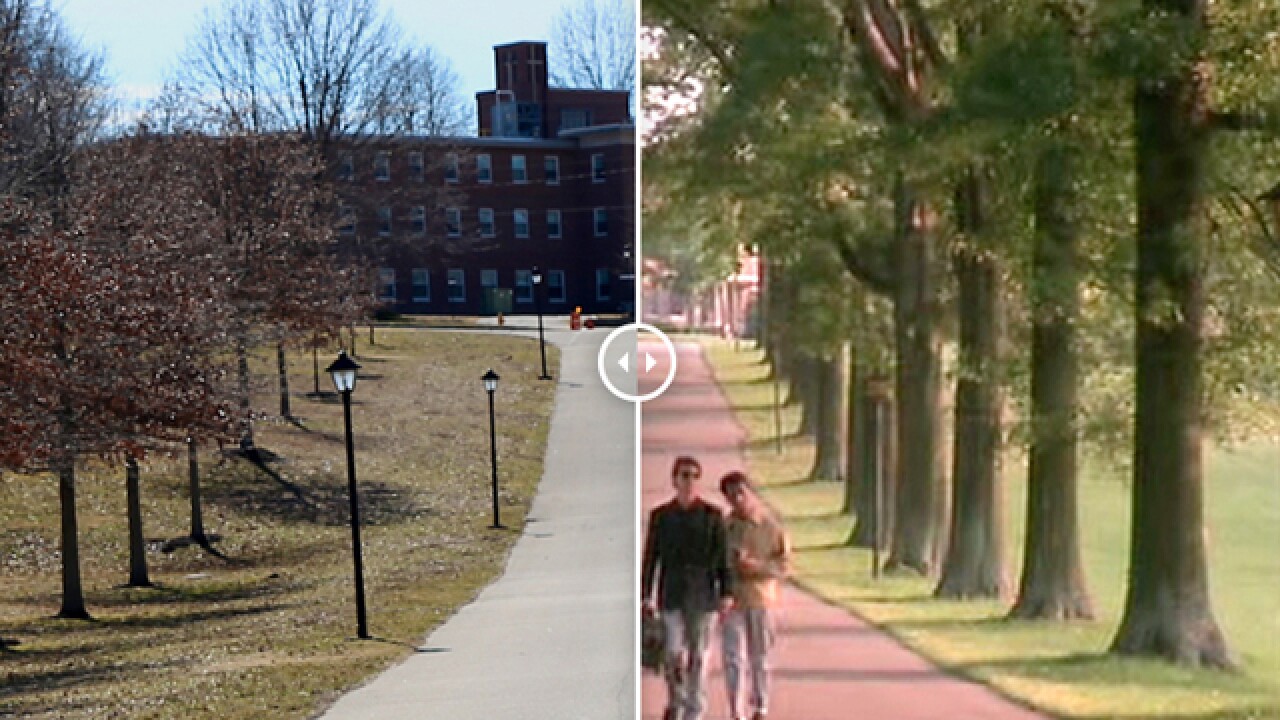 But the film's significance goes beyond its accolades: It shined a Hollywood spotlight on Cincinnati and Northern Kentucky.

Several scenes in “Rain Man” -- which starred Tom Cruise and Hoffman -- were filmed in the Greater Cincinnati area and helped promote and build the local film community.

Take a look back at some of these locations below and how they look today in our special "Then and Now” series.

HOW TO USE OUR TOOL: Click and hold the white circular “slider” tool at the center of each photograph. Then move the slider left and right to see an image from the film and an image of that same spot today.(This feature may not be compatible with all versions of Internet Explorer.)

The St. Anne Convent served as the backdrop of the film's Wallbrook mental institution where Hoffman's character lived. Cruise and Hoffman appear in several scenes in front of the convent -- and the film's iconic poster shows the two traveling down its long oak-lined entrance near the intersection of St. Anne Drive and Mary Ingles Highway in Melbourne, Ky. Many of the trees made famous in this scene were cut down in December of 2007 due to poor health and falling limbs. (Film still courtesy Metro‑Goldwyn‑Mayer/Now photo by Emily Maxwell)

The bank scene in "Rain Man" was shot inside the Dixie Terminal Building at 49 E. Fourth St. and Walnut Street in downtown Cincinnati. The bank was staged in the lobby area because no banks existed inside the building at the time. (Film still courtesy Metro‑Goldwyn‑Mayer/Now photo by Emily Maxwell)

The funeral scene in "Rain Man" was shot in the Evergreen Cemetery in Southgate, Ky. in 1988. The funeral was staged in the open grassy area between the "Smalley" monument and a stone angel, which are real and still stand today. Rolf Monuments in Newport, Ky. created several other monuments for the scene out of Styrofoam. (Film still courtesy Metro‑Goldwyn‑Mayer/Now photo by Emily Maxwell)

The John A. Roebling Suspension Bridge was used for the filming of a driving scene featuring Cruise, Hoffman and Valeria Golino. The three crossed the bridge on their way to Cincinnati in a 1949 Buick convertible. (Film still courtesy Metro‑Goldwyn‑Mayer/Now photo courtesy Google Maps)

The airport scenes from "Rain Man" were shot at CVG's Terminal 2, which is now closed to the public. For this scene, Hoffman's character Raymond sat under artist Winold Reiss' mural "American Laundry Machinery." The mural was rescued when a portion of the Cincinnati Union Terminal was demolished. It was later taken to CVG where it remains unchanged today. (Film still courtesy Metro‑Goldwyn‑Mayer/Now photo by Emily Maxwell)

In this scene, Cruise's character Charlie and Hoffman's character Raymond are sitting at a table at Newport's Pompilio's restaurant. After arriving, Charlie leaves the table to make a call on the restaurant's pay phone. He contacts Dr. Bruner to inform him he is with Raymond. Charlie intends to start a custody battle in order to get Raymond's doctor to settle out of court for half of his father's estate. The decor of Pompilio's has changed over the years, but the tile pattern of the floor remains today. This is the same location where Raymond counted the toothpicks dropped by their server played by Bonnie Hunt. The pay phone used by Cruise in this scene also remains today, mostly unchanged. (Film still courtesy Metro‑Goldwyn‑Mayer/Now photo by Emily Maxwell)

The Vernon Manor Hotel at 400 Oak St. is where Hoffman and Cruise's characters spend the night after leaving the Wallbrook mental institution. Only exterior shots of the building were used. A set was built for the interior scenes at WCET's studios. (Film still courtesy Metro‑Goldwyn‑Mayer/Now photo by Emily Maxwell)

For more photos of 'Rain Man' filming locations in the Tri-State, click here