Oktoberfest Zinzinnati: Here's everything you need to know 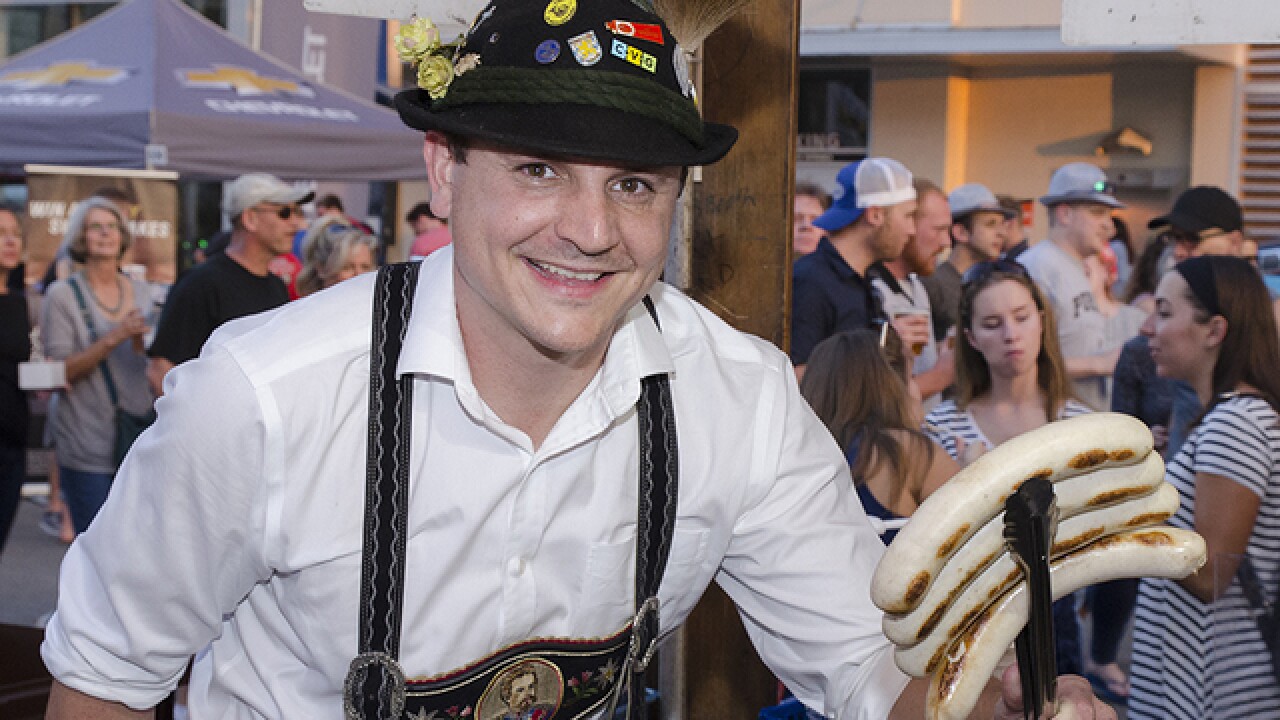 CINCINNATI — Oktoberfest Zinzinnati, Cincinnati's annual celebration of all things German, will return Downtown for its 41st year this Friday through Sunday.

The festival, which is expected to draw 500,000 people, will take place on Second and Third streets between Walnut and Elm streets. (The Cincinnati USA Regional Chamber, the festival's organizer, moved Oktoberfest in 2016 from Fifth Street to avoid disrupting service for the Cincinnati Bell Connector streetcar.)

Here's what else you need to know to have a good time.

Braxton Fass Bar: Don’t want to miss your favorite game while at Oktoberfest Zinzinnati? Head toward the all-new Braxton Fass Bar at Third and Walnut streets. (Fass is the German word for barrel.) A 20-foot LED television will broadcast some of the biggest sporting events all weekend. The TV will sit atop an elevated stage with two 30-foot bars and a seating area extending from it.

Beyond its core beers, the Covington brewery’s Oktoberfest beer, Oktober Fuel, and new collaboration beer Graeter’s Blueberry Pie Brown Ale, which benefits The Cure Starts Now, will be on tap at the bar. Braxton also will host timed tappings of new beers from Braxton Labs, its innovation facility located inside the Party Source in Bellevue. And every time a beer keg blows at the bar, the person who ordered the barrel-killing beer will get an official “Braxton Fass Morder” T-shirt.

Braxton and Graeter's mystery ice cream: Braxton will unveil a new ice cream flavor it created with Graeter’s at 5 p.m. Friday at its beer booth. Graeter’s will start selling the new flavor on Oct. 1 at its scoop shops and online store.

The “World’s Largest Chicken Dance": Cincinnati Bengals quarterback Andy Dalton and wide receiver A.J. Green will join a long list of celebrities and athletes who have served as grand marshals on Oktoberfest Zinzinnati's main stage. In honor of the Bengals' 50th anniversary, event organizers picked Dalton and Green to lead the World's Largest Chicken Dance, which will take place at 1 p.m. Sunday on the Sam Adams main stage at Second and Elm streets.

Oktoberfest Zinzinnati opening ceremonies: Sam Adams founder Jim Koch will tap a keg to kick off the weekend’s festivities at 11:30 a.m. Saturday on the Oktoberfest main stage at Second and Elm streets.

Running of the Wieners: The totally adorable dachshund race kicked off festivities at 11 a.m. Friday. The Wieners -- many in festive costumes -- ran on Race Street between Second and Third streets. Our staffer Sara's Wiener dog Mini didn't win her first heat, but she looked adorable anyway.

Check 'em out! Heat 5 of the Running of the Wiener's! Mini didn't take first but proud of her performance! @WCPO pic.twitter.com/UYHDn7rn9T

The Gemuetlichkeit Games: These goodwill games that pit media personalities against one another in fun competitions start at noon Friday near the corner of Third and Race streets.

The Sam Adams Stein Hoisting Championship: After weeks of preliminary rounds at area bars and restaurants, a select few will compete for stein-hoisting glory at 5 p.m. Saturday on the Oktoberfest main stage at Second and Elm streets.

The Glier's World Brat Eating Championship: Joey “Jaws” Chestnut will defend his title at 2 p.m. Sunday at the Braxton Fass Bar at Third and Walnut streets.

Live entertainment: Bands will play on nine stages located across Second and Third streets. Tap on the icons in the map below for stage locations and showtimes or check out the entertainment tab at www.oktoberfestzinzinnati.com.

The food and drinks

Before going to Oktoberfest Zinzinnati, make sure you plan your route. A good option to avoid traffic is parking away from the event and riding either Cincinnati's Metro, TANK or the Cincinnati streetcar to Oktoberfest. (The streetcar has a stop near the intersection of Walnut and Second streets in front of Howl at the Moon.) Road closures will begin at 9 a.m. Friday and continue through 4 a.m. Monday, Sept. 18. The closings include:

In order to allow access to parking garages near Oktoberfest, the following streets will be converted from one-way to two-way streets: