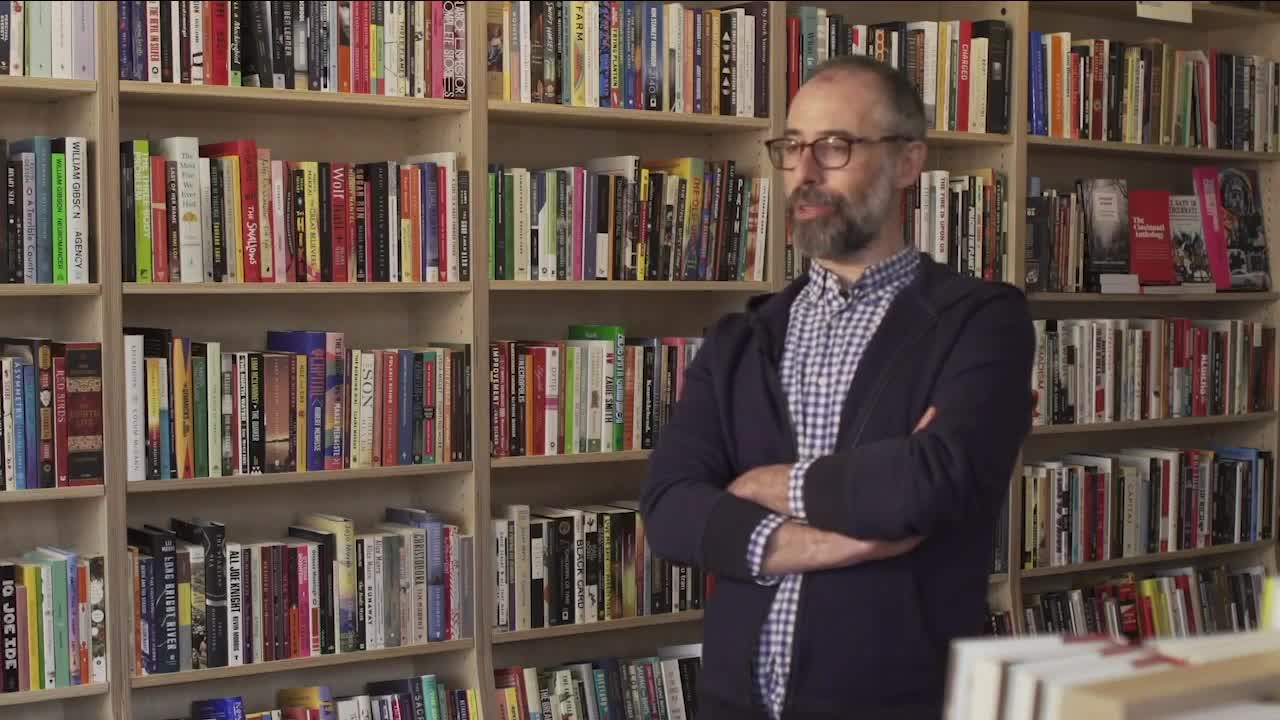 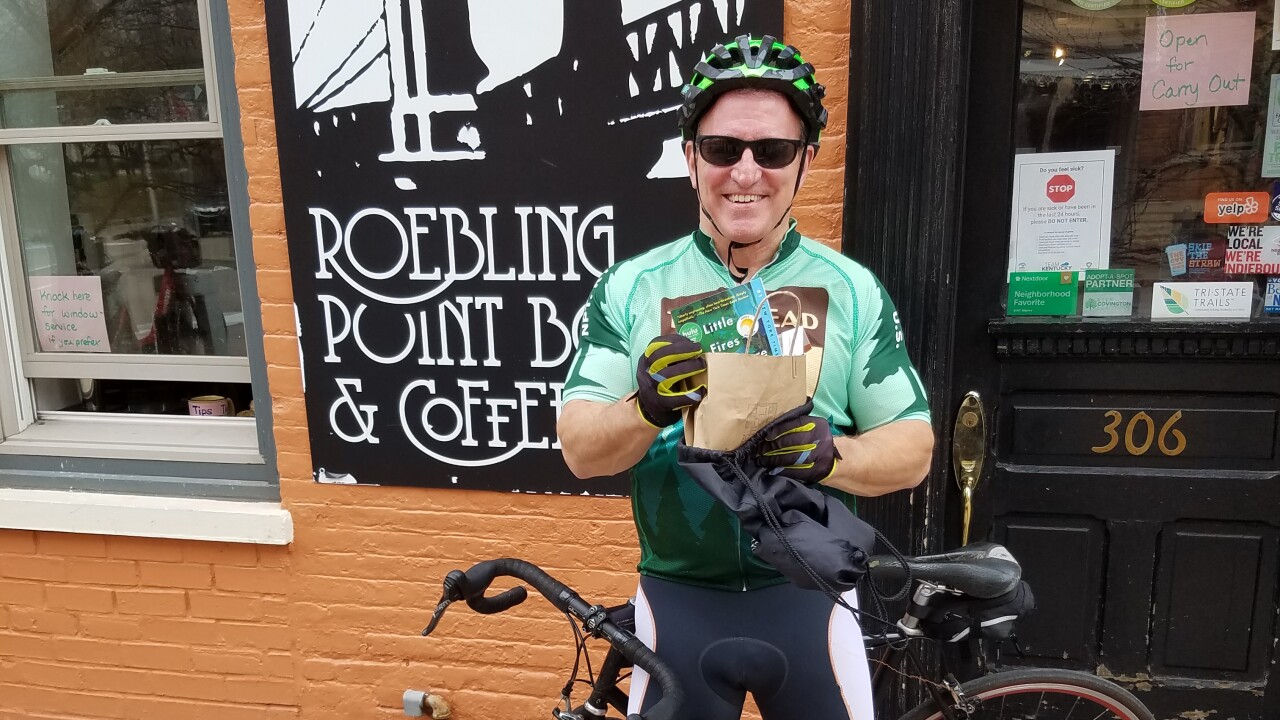 But a couple of weeks ago, when Ohio Gov. Mike DeWine and Kentucky Gov. Andy Beshear ordered dine-in restaurants and bars to close, “nonessential” businesses such as libraries and bookstores also closed. Hunt followed suit and temporarily shuttered the store to the public.

At first, he and his small staff sold coffee and books from a walk-up window, but not wanting to jeopardize the health of his staff and customers, this week he ceased operating from the window.

“My primary concern is A, we are able to make sure our staff stays solvent, and that B, our customers are safe and have something to read. Those are the only two things I think about these days,” Hunt said.

In order to keep the city reading physical books, Hunt decided to deliver books via bike for free to customers who live within a five-mile radius of the store. (Hunt also will drive books beyond the five-mile limit, and he’ll ship them, too.)

“I think somebody asked us if we could drop a book off and I said sure,” Hunt said, explaining the origin of the idea. “This is another element of service, and we should help as best we can during this time.”

He makes sure to wipe the books down with an antibacterial cloth and leaves the books on customers’ doorsteps to avoid interaction. He processes payments through Square, so no cash is exchanged.

Hunt said he has been delivering a half-dozen orders a day, sometimes as much as five books per household.

“It means the whole family is reading, which is nice,” he said.

Fiction, he said, has been the most requested genre.

“I think people want to lose themselves in a story. There’s been some nonfiction, but it hasn’t been [Albert] Camus’ ‘The Plague’ or anything like that. We get enough in our day to day that we don’t want to read about it as well. I think people are using the books right now for a little bit of escape, and that’s healthy.”

The bookstore doesn’t have a searchable book database, but customers can call the store, email him or send a Facebook message to the store and request whatever titles they want. This method has coerced readers into becoming more creative with their reading lists.

“It’s probably more diverse now than ever before,” Hunt said. “Sometimes if I look at our sales, they’ve been books we’ve had on the shelves that people discovered here. But now they’ll call us with a book we don’t have on the shelf. It’s forcing us to become broader in terms of what we offer, which is great. I love seeing what people have in mind when they’re not prompted by something we have on the shelf.”

Across town in Northside, Downbound Books, which opened last October, also had to pivot its business model. In mid-March, Downbound owner Greg Kornbluh introduced shipping, and until March 23, he allowed neighborhood delivery and curbside pickup. But now Downbound only ships products — and Northside residents get free shipping.

In a strange turn of events, the pandemic has caused people to buy more books from him, Kornbluh said.

“In terms of revenue, we’ve had our busiest week since December, after a dreadfully slow January and February,” he said. “Not necessarily more transactions than usual, but most folks are buying multiple items at once – a lot of puzzles, fiction, quite a few books on nature. Activity books for kids have definitely been hot. Serious nonfiction is typically a strength of ours, but we’ve been doing way less of that than usual.”

He’s happy about the increase in sales but not about the circumstances.

One issue for Kornbluh has been supply-chain interruptions. He said the Chicago Distribution Center, a major hub for small presses and university presses, has shut down.

“Bookstores all across the country have been seeing the same surge as us, so the distribution centers and wholesalers that remain open are inundated, which causes order fulfillment delays,” he said.

With the coronavirus potentially lasting for several months, both Kornbluh and Hunt are concerned about their stores and their employees’ futures.

“I still have a lot to figure out about how we’re going to handle things for the next while,” Kornbluh said.

Hunt agreed that the pandemic would have a lasting impact.

“I would like to tell you that indie bookstores are resilient enough to handle anything, but this is something we’ve never imagined before, so we’ll have to see,” he said.

Until bookstores and other nonessential businesses are safe to reopen, Hunt will continue to bike around town and deliver books.

“Now that I’m old, I’ve learned I’m probably only good at doing a couple of things, and this is one of them,” he said.

To order books from Roebling Point, call 859-815-7204, email richard@roeblingpointbooks.com or message them on Facebook.

Book lovers can order gift cards and purchase books from these and other booksellers. You also can order books from Bookshop.org. Independent bookstores receive 25% of the revenue.