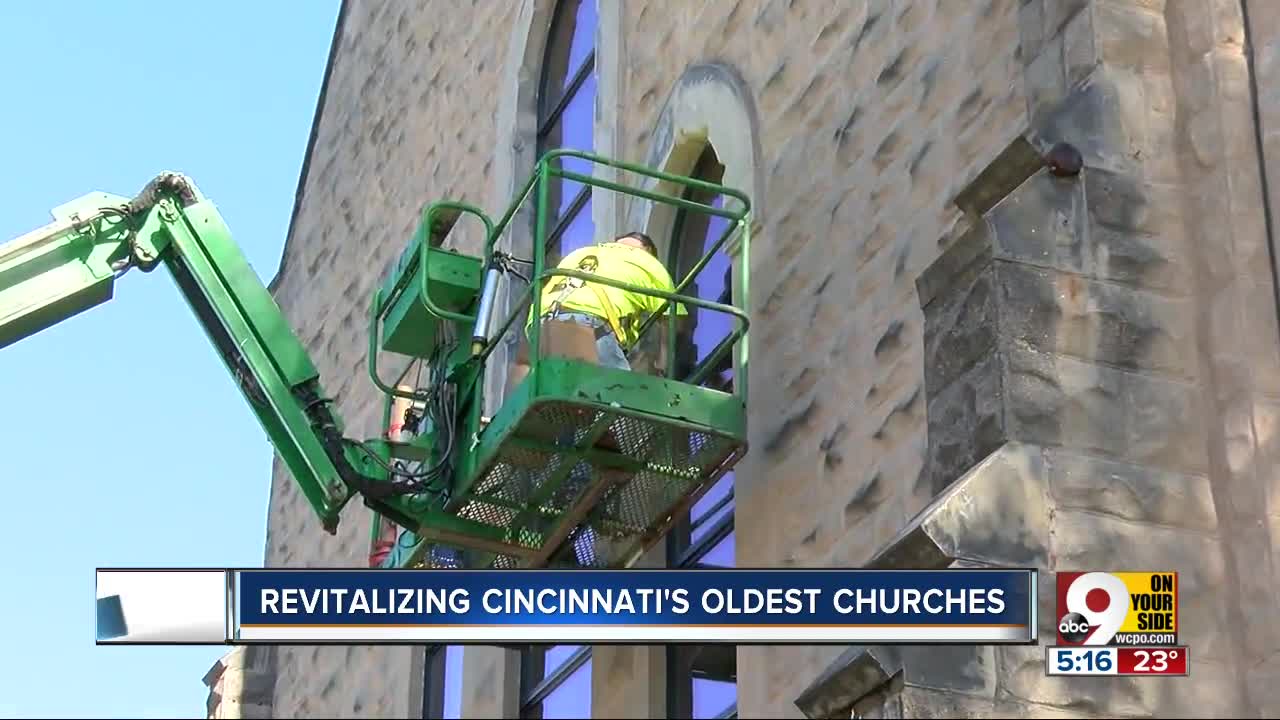 When the owners of Taft’s Ale House first toured St. Paul’s German Evangelical Church in 2011, they could not imagine opening a gastropub in the space. “My ‘my, oh, my’ moment was when I first saw the building because it was so bad,” said David Williams, one of Taft’s managing partners. “The roof had caved in. The floors had caved in.” The historic St. Paul’s sat empty at 1429 Race St. in Over-the-Rhine for nearly 40 years, a fate shared by many other historic churches in Cincinnati.

CINCINNATI — When the owners of Taft’s Ale House first toured St. Paul’s German Evangelical Church in 2011, they could not imagine opening a gastropub in the space.

“My ‘my, oh, my’ moment was when I first saw the building because it was so bad,” said David Williams, one of Taft’s managing partners. “The roof had caved in. The floors had caved in.”

The historic St. Paul’s sat empty at 1429 Race St. in Over-the-Rhine for nearly 40 years, a fate shared by many other historic churches in Cincinnati. St. Paul's was one of the city's first Protestant churches when it began holding services in 1850 for Over-the-Rhine's growing German immigrant population. It closed in the late 1970s.

The city of Cincinnati purchased St. Paul's in the 1980s and provided minimal repairs and weatherproofing to preserve the church as a cultural landmark. In 2010, Cincinnati Center City Development Corp. (3CDC), a then-new private nonprofit organization, brokered an agreement with the city to stabilize and find a tenant for the church.

Taft's owners agreed to occupy the more than 160-year-old church after 3CDC completed stabilization work on the building in 2012. The gastropub officially opened on Reds Opening Day, April 6, 2015, and since has served nearly 1 million people, Williams said.

“The neighborhood has kind of grown up around the building," he added.

Taft's owners aren't the only local entrepreneurs to find success by giving some of Cincinnati's oldest and often neglected places of worship a second chance. Many historic churches are getting new lives thanks to the city's ongoing urban redevelopment boom.

'The building was so spectacular'

Williams said he and his partners found it hard "to even envision what could potentially happen" when 3CDC initially approached them about opening Taft's Ale House.

“But we were very interested in what 3CDC was doing in the inner city and with the redevelopment of Over-the-Rhine, and we kept coming back to this building because the building was so spectacular,” Williams said.

The former St. Patrick's Catholic Parish and School in Northside, Old St. George Church in Corryville, St. John’s Unitarian Church near Washington Park and Holy Cross Monastery and Chapel in Mount Adams also have been saved by those with a vision and passion for historic preservation.

"Quite frankly that is why we are very lucky here in Cincinnati," said Brad Rogers, vice president of Structural Systems Repair Group (SSRG) . "We have many contractors, many owners that are committed to preserving some of those pieces. They also see the energy it brings to a neighborhood when it comes back."

Rogers, a West Side native, has worked as a project engineer in Cincinnati for nearly 20 years. He has spent the past five years in his current role at SSRG, an architecture and construction firm that specializes in the rehabilitation of historic structures.

Rogers helped to stabilize St. Paul's multiple times before it became Taft's Ale House. He also worked to save Old St. George's after a fire caused its partial collapse in 2008. In 2016, Crossroads Church opened a branch location, Crossroads Uptown, inside the more-than-100-year-old church after multiple other plans for the building, including a boutique hotel, fell through.

“You know sometimes it comes down to the individual neighborhood and the people’s connection to the building,” Rogers said. “Old St. George, it might not be part of too many people’s history, but I can personally say my grandparents were married in that church. My mother was baptized in that church.”

“This is hard work to get a project off the ground, to make it economically viable," Rogers said. "At the end of the day, it’s got to be sustainable.”

Other churches have found successful second acts as entertainment venues by building on a secondary function offered by places of worship.

When Scott Hand and Scotty Hunter walked through the former St. Patrick's Catholic Parish and School at 1660 Blue Rock St. in Northside, they knew they had found the future home of Urban Artifact Brewing Co.

"Part of the things that made the church building itself appealing to us and our business plan was the same reason that made it a good place for a church to begin with," Hand said. "It's centralized in the neighborhood. It created a gathering space and a destination for the folks who lived in and used to use it regularly."

And though the church closed in 1993, it did not require extensive repairs like St. Paul's in Over-the-Rhine. Hand, an architect, and Hunter, an engineer, were able to convert the former school's gymnasium into a brewhouse and the parish's basement into a taproom before opening Urban Artifact in April 2015.

The facilities also "fit what we wanted to do long term with the business because we did have the different buildings on the property,” Hunter added. “We could have the brewing facilities in one building ... our taproom in another. (And) we could eventually have an event space."

Hand and Hunter said neighborhood support confirmed they had chosen the right location for the brewery.

“The response and reception from everyone who used to come to the church when it was St. Patrick’s has been nothing but positive," Hunter said. "People are excited to see that we are keeping this building, that we are stabilizing this building and they’re not losing that landmark and that history.”

That support in turn has allowed the partners to begin a second phase of rehab work: They are currently turning the church's historic sanctuary space into a year-round event space capable of hosting up to 200 people.

"What we are tackling now is that we’re replacing all of the existing windows," Hand said. "We are replacing all of the broken roof tiles that were up on there that had been damaged over the past 20 years of neglect. We are adding some heating and cooling systems and are generally trying to bring it up so it can be a conditioned space as opposed to being sweltering in the summer and freezing in the winter."

The owners of the Transept and the Monastery Event Center followed a similar business model, converting the former St. John's in Over-the-Rhine and Holy Cross Monastery in Mount Adams, respectively, into event spaces.

Rogers views these modern church transformations through the broader scope of history.

“It’s all about changing our paradigm on what a building can be and not as a static, one-time use,” he said. “You know, I have friends from Europe in the business. They are always amused whenever someone refers to a 200-year-old building as old. I mean they are talking about 700-, 800-, 900-year-old buildings that have been in continuous use.”

Rogers believes success stories such as Taft's will propel the current trend of church preservation in Cincinnati.

“You know, 20 years ago, I had a hard time seeing the vision that we’d be this far along with restoring a lot of these buildings,” he said.

Since opening Taft's Ale House in 2015, Williams and his business partners have opened a second location and production facility in Spring Grove Village and plan to open a new Taft's Ale House location in Columbus this month.

Williams attributes that success to the unique location St. Paul's offered he and his business partners.

"I hear people talk about Taft's Ale House in Cincinnati all the time," he said. "We also just felt it was a huge opportunity to save one of the most beautiful buildings in the city, one of the oldest churches in southwestern Ohio and a building that really had no other options other than being torn down."