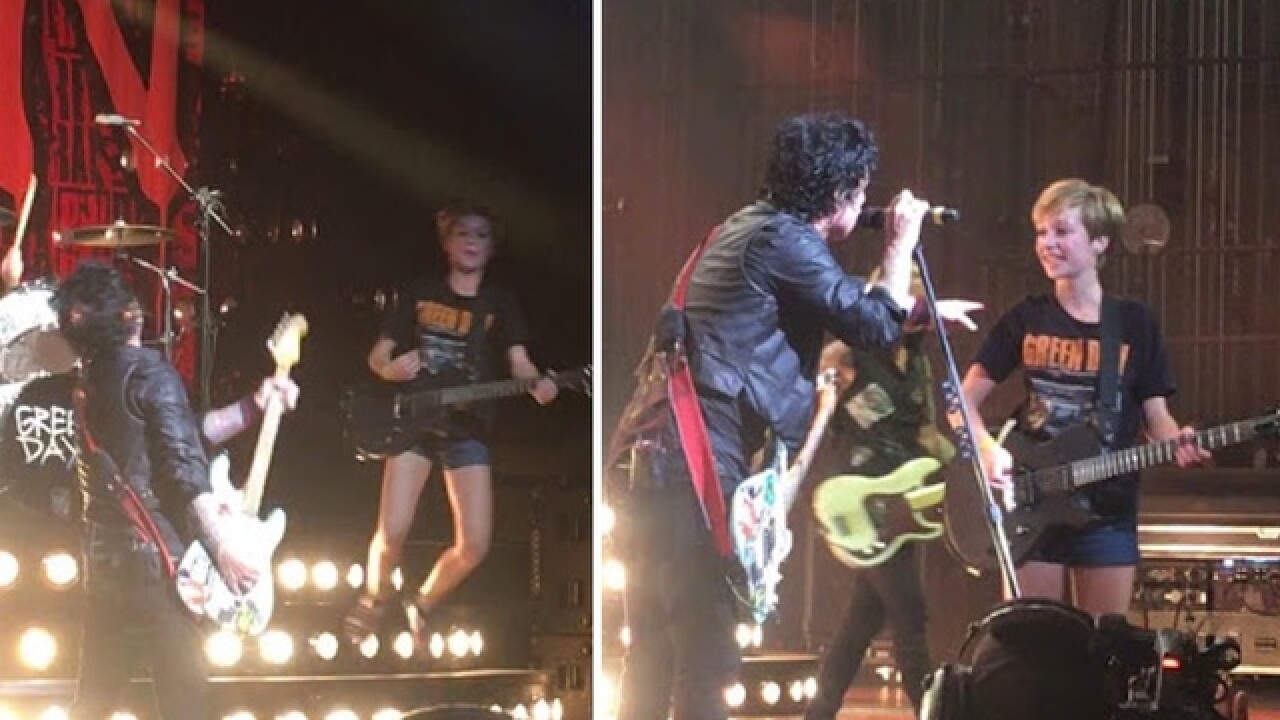 Copyright 2017 Scripps Media, Inc. All rights reserved. This material may not be published, broadcast, rewritten, or redistributed.
<p>Sadie Aseere, 11, was pulled up on stage to perform with Green Day at a concert at Riverbend. Photos provided by Fort Thomas Matters.</p>

FORT THOMAS, Ky. -- An 11-year-old from Northern Kentucky became a rock star this weekend -- sort of.

Sadie Aseere, a sixth grader at Highlands Middle School and huge Green Day fan, was one of 20,000 people who attended the rock concert at Riverbend Music Center Sunday, according to a story from Fort Thomas Matters .

Like most people in attendance, Sadie and her parents, Jenni and Dan Aseere, had lawn tickets to the concert. The story by  Fort Thomas Matters said Sadie ended up at the stage -- and, later, on stage -- due to "the culmination of a series of random acts of kindness."

First, the Aseere family ran into another Highlands Middle School family, the Jamies, and gained entry to the Lawn Lounge area. Later, the two girls were offered pit passes by "a random gentleman." With their parents' approval, they went to up to the stage.

After Green Day took the stage, frontman Billy Jo Armstrong asked if anyone in the crowd could play the guitar. Sadie -- along with many others -- raised their hands. Armstrong

Jenni Aseere told Fort Thomas Matters  she heard Armstrong say "How old are you? You're eleven?" and then cheers. "How long have you been playing? Two years?" Then, she said, she urged her husband to begin recording video on his phone.

Armstrong asked Sadie if she could play three chords. Then, he said "Aw, f*** it, get your ass up here,"

Armstrong handed Sadie his guitar and she played while he sang lyrics to "Knowledge." When the song was done, Armstrong asked for Sadie's name. Then, the crowd chanted "Sadie, Sadie, Sadie..."

She said that was her favorite part.

"There were 20,000 people shouting my name," she told Fort Thomas Matters .

Armstrong then told Sadie she could keep the guitar.

Sadie told Fort Thomas Matters that she felt confident that she could play on stage, but she was still a little nervous.

"It was really nerve-wracking, but after a while I got a little more comfortable up there," she told Fort Thomas Matters .

Jenni Aseere said she believes Sadie had her brush with fame because their family consciously tries to "pay it forward."

“We live by the philosophy of paying it forward, we have a goal that everyone has to help three people through the week," Jenni told Fort Thomas Matters . "In fact, we’d just discussed it a couple of days before the concert. One of Sadie’s was that she’d seen a boy rummaging for a pencil in his bag at school and she’d given him one of hers. Just small acts like that.

"We really believe that what goes around, comes back around," she said. "Good things happen to good people”